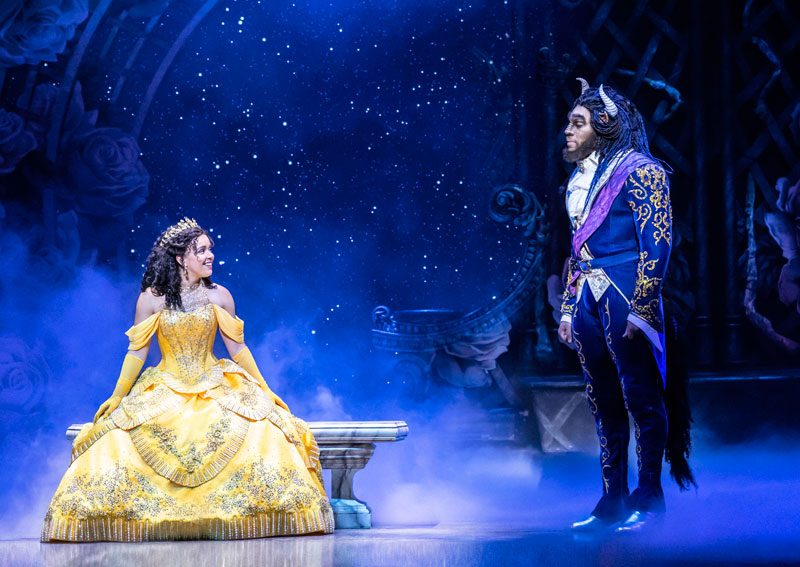 Shaq Taylor as Beast and Courtney Stapleton as Belle in Disney's Beauty and the Beast | Photo credit: Johan Persson / Disney

Disney’s ‘Beauty and the Beast: The Musical’ to return to Bristol Hippodrome

Disney’s beloved Olivier Award-winning stage musical Beauty and the Beast – which has been re-imagined and re-designed in a completely new production – will make a triumphant return to Bristol this Autumn, as part of its UK and Ireland Tour.

The new production of Beauty and the Beast originally opened at the Bristol Hippodrome in August 2021, enjoying a sold out season and thrilling audiences and the acclaimed musical will soon return to the city – with performances beginning from Thursday 29 September 2022, for a strictly limited season until Saturday 12 November.

Spectacular new designs and state-of-the-art technology fuse with the classic story, as the timeless romantic tale is brought to life on stage like never before, with all the charm and elegance audiences expect from Belle and her Beast.

Olivier Award nominee Matt West directs and choreographs the new production, leading a team that includes composer Alan Menken, lyricist Tim Rice, bookwriter Linda Woolverton, scenic designer Stan Meyer, costume designer Ann Hould-Ward and lighting designer Natasha Katz. The new Beauty, while retaining the lush period sound of the Oscar-winning and Tony®-nominated score – which brought classics including Be Our Guest and Beauty and the Beast, as well as Change in Me, added to the musical production in 1998 and retained thereafter – has new dance arrangements by David Chase, allowing original choreographer Matt West to re-visit his work.

Longtime Menken collaborators Michael Kosarin and Danny Troob are musical supervisor/vocal arranger and orchestrator, respectively. Completing the design team, Tony®-winner John Shivers is sound designer, Darryl Maloney is the video and projections designer, and David H. Lawrence is hair designer. Jim Steinmeyer is the illusions designer, as he was on the original 1994 production. Casting for the production is by Pippa Ailion Casting.

Based on the 1991 film – the first animated feature ever nominated for an Oscar for Best Picture – Beauty and the Beast opened on Broadway in April 1994, garnering nine Tony nominations and one win. It played for more than 13 years on Broadway, closing in 2007. To this day – 28 years after it opened –it remains among the top 10 longest running shows in Broadway history.

The original West End production of Beauty and the Beast opened at the Dominion Theatre in April 1997, playing over 1100 performances to more than two million people. It won the 1998 Olivier Award for Best Musical and enjoyed a hugely successful UK & Ireland tour in 2001.

Beauty and the Beast is produced by Disney Theatrical Productions, under the supervision of Thomas Schumacher.

Beauty and the Beast is playing at The Bristol Hippodrome from Thursday 29 September – Sunday 12 November. Tickets are available from atgtickets.com/venues/bristol-hippodrome/

Next
Get on course: adult courses