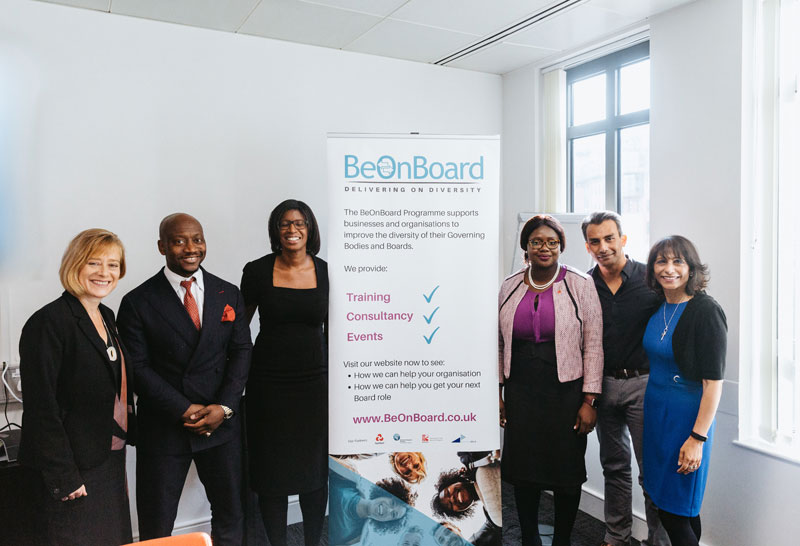 “Today’s challenges will not subside. Diversity of perspectives will help to future-proof organisations,” says Kalpna Woolf, CEO of BeOnBoard – a Bristol-based programme helping businesses to improve the diversity of their governing boards. As we move into a new year, Kalpna explains why it is more critical now than ever to have as many voices as possible at the top table…

“Bristol is a great city but it has the potential to be a global city,” says Kalpna Woolf, charity campaigner, CEO of BeOnBoard, and former head of production at BBC Factual. Now a trailblazer for change in the city, working at both grassroots and board level, Kalpna is determined to ensure there is ample opportunity for everyone, driving for better gender and ethnic minority representation and an inclusive environment that not only allows people to fulfil their potential but also organisations to flourish with the very best talent.

From 1990 to 2013, Kalpna was in charge of 140 production management staff at the BBC; she oversaw the Natural History Unit in Bristol, managed an £80m business and was responsible for 550 hours of programming. Her extraordinary achievements were finally recognised when she was awarded the Asian Women’s Achievement Award. However, on leaving the organisation, Kalpna sat on a number of Bristol-based boards and, in direct contrast to our supremely diverse city, noticed that the perspectives, views, skills and range of knowledge were all very similar.

“The first couple of boards I sat on I was the only BAME person on them,” Kalpna tells us. “I couldn’t understand it because I knew there were all these amazing people in the city that would have great things to contribute – where was everybody? We were making decisions that were really important but we didn’t have anybody there that could really help us get it right.”

Since diverse boards are 43% more likely to see above-average profits, Kalpna saw this as a huge missed opportunity, and incredibly damaging to the organisations’ profitability, reputation, brand and ability to attract a wide range of talent. Confident in the knowledge that the talent pool was rich and untapped, Kalpna set up BeOnBoard in 2017. Its aim: to develop board-ready talent while working with organisations to help them understand and embrace the commercial power of diversity while providing them with a blueprint for success through organisation-wide Equality, Diversity and Inclusion (ED&I).

Working as an incubator with Business West, BeOnBoard is thriving. It now has a talent pool of over 250 people with outstanding skills in the legal, engineering, education, accountancy and tech sectors. The team is also currently working with over 70 organisations, businesses and universities, including St Pauls Carnival, Bristol Zoo Gardens, Red Maids’ High School and the University of the West of England.

Going from strength to strength, BeOnBoard recently won the Stepping Up Award for its ‘Unique Contribution to Diversity’; it has teamed up with Watershed for the cinema’s first open call for trustees; it is planning a ‘Diversity of Thought’ speaker series in February, inviting national inspiring diverse leaders to share their experiences; and it is preparing to launch a new project, Aspire, this month, funded by the National Lottery. The project aims to disrupt the leadership status quo by increasing representation across the voluntary, community and social enterprise sector.

This issue, I had the pleasure of sitting down with Kalpna to speak about the obvious need for a diverse boardroom; the undeniable benefits it has for both people and profit; and why now, as we look forward to a post-pandemic world, it is more critical than ever to have a broad range of perspectives at the top table, driving us all forward, together.

When speaking to Kalpna, her passion, her care, and her love for the city and its people are evident from the outset. Throughout our time together, she speaks powerfully about how pivotal ED&I is to the survival of organisations as they wrestle with the ever-changing challenges of our modern world.

“For Bristol to be the leading city in the UK, it needs to have the best people at its strategic levels,” she explains. “Companies with gender and ethnic diversity out-perform their competitors by at least 25% – that’s not to be sniffed at. Why would you turn away from the opportunity to gain an extra 25% profit, especially during the pandemic when you need every tool in your armoury to stay ahead?

“Diversity sparks richer thinking, innovation and solutions. Research shows that millennials want to work in organisations that don’t just talk about diversity but where they can see diverse leadership. A culture where differing views are encouraged fosters better thinking and engagement from employees.

“Today’s challenges won’t subside – they will continue. The ‘new normal’ will be a shifting space. Diversity of thought and perspectives will help to stabilise and future-proof organisations.

Are we the best that we can be?
Both the Covid pandemic and the climate crisis are forcing boards to rethink how they operate, while, at the same time, offering them an opportunity to re-energise – to not just survive, but thrive. Kalpna believes that, as we move into a new year, organisations must take responsibility for themselves, review their culture and create a more welcoming space for everyone to grow, develop and achieve.

“The pandemic has not only shown the terrible inequality that has existed but it has revealed the impact of structural racism. It is time to review ourselves and ask: are we the best that we can be?

“With Covid, with George Floyd, with Black Lives Matter, organisations have to think: what kind of society do we want? ED&I and the challenges that we are facing are not separate things. ED&I sits at the core of all challenges. If you bring different minds into the conversation, you’re going to get accelerated change. Each mindset understands the issues from a different perspective. What does climate change mean to me being an Asian woman? It will mean something different to a middle class white woman. I think it’s the single most exciting opportunity for businesses – take it, it’s almost like ignore it at your peril.”

Inspiring the next generation
BeOnBoard has recently partnered with the University of the West of England, helping to recruit a new generation of governors for its board. As a governor for UWE herself, Kalpna is keen to see that one of the region’s leading universities not only reflects its student population but provides role models for those aspiring to similar positions.

“Having a diverse board will give you a competitive edge – it is a win-win,” says Kalpna. “We are creating role models for aspiring future leaders – it’s a really exciting time. UWE is a great university and we have just got to make sure that we deliver on our strategic aim.”

Established network of partners
Although a paragon of drive and enthusiasm, Kalpna does not work alone. While creating BeOnBoard, she brought together an incredible team of local game-changers, all of whom are equally as devoted to the city and its people as Kalpna. Sado Jirde, Director of Black South West Network – a BAME-led infrastructure organisation, working for race equality across the south west; Dr. Zara Nanu, CEO and founder of Gapsquare – an award-winning provider of gender pay gap analysis software; and Poku Osei, founder and CEO of Babbasa – a social enterprise supporting ethnically diverse and disadvantaged young people, are just a few of the partners involved with BeOnBoard. From a solo endeavour, BeOnBoard now boasts a great team of 10 people, with Executive Director Julz Davis supporting Kalpna.

“I want to call out a huge thanks to my hard-working team. We have all worked together before and we all have a vision for the south west,” Kalpna explains. “We are a group of individuals who can make a real difference with our collective strength.”

Invaluable experience
Although only founded five years ago, BeOnBoard has already helped individuals and organisations take massive steps forward in terms of growth and development. The feedback from candidates is particularly remarkable. Ameeta Virk, a market specialist working in the Department for International Trade in India and the US said: “As
a female and member of an ethnic minority group, I’ve personally experienced bias and it has at times broken down my confidence. Kalpna and the BeOnBoard team have given me the tools, the training and the motivation to pursue positions that I didn’t feel like I could get. The mentoring I’ve received has been invaluable and I’ve recently gained my first board position. BeOnBoard’s mission to change the typically homogeneous board is to be celebrated.”

The language of food
Kalpna’s work does not stop there. In 2015, she set up the charity 91 Ways to Build a Global City, which refers to the 91 languages spoken in Bristol, as listed in the last census. At the core of the charity’s incredible work is belief in the connecting power of food and community. It aims to bridge gaps and build a more inclusive city. Since its humble beginnings, it has brought together around 15,000 people.

“I set up 91 Ways as a way to help us understand each other and empower each other. To anyone that calls Bristol their home, you have a reason to be here, you have a power, you have a say, and you have an opportunity. I chose to put food at the centre of the charity because when we share food, we share our hearts, we share who we are. It is a great way of starting a conversation – it’s a catalyst, it’s a leveller.”

But where does 91 Ways fit in with BeOnBoard? They go hand-in-hand, says Kalpna. “The charity is all grassroots level and I find that really lovely. It is my heart but BeOnBoard is my head. I had to create BeOnBoard because I couldn’t go around the city at grassroots level saying you have an equal opportunity when I know that didn’t exist. When you have people in positions of power who know how to value our 91 languages then you create an opportunity for people, you’ve got the role models that they need.”

What the future holds
When it comes to the future of BeOnBoard, Kalpna is clear: “We must drive forward. Every day I think is a missed opportunity for an organisation. Do not push it down your agenda. People think we’ll get to that but, no, it’s not something separate, it is at the core of everything you do. You’re basing your investment decisions on long-term economic social environment sustainability. I think it will create a legacy, I really do.”

Kalpna’s drive to see more boardrooms reflecting Bristol’s population is truly remarkable and it is impossible not to admire someone with such talent, such heart, and such belief in our city. Her dedication to her projects is unwavering. As my time with Kalpna comes to an end, the successful business leader and committed mentor left me with some parting advice, relevant for anyone that is questioning their potential. “My experience is that if I can do it, anyone can do it and probably better. Step forward – you can’t go wrong, you can learn, you can develop and you can make a contribution. Take inspiration from the leaders that you aspire to be. Be bold and go for it.”

If you are serious about diversifying your board, contact the team at BeOnBoard, who can guide you through the ED&I journey.