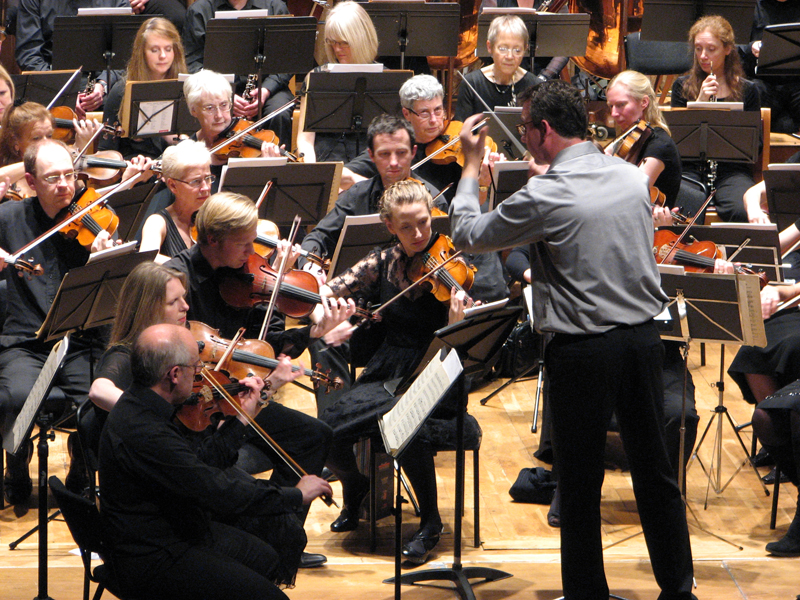 Pandemic or no pandemic, you can’t stop song for long. This is not Bomont, Oklahoma, for one thing, and our musically minded have found ways to work within their restrictions, even if it does mostly involve Zoom. We’ve loved seeing how creative people have got – The Self-Isolation Choir (theselfisolationchoir.com), founded by choral singers to comfort choral singers feeling disconnected, bringing them together to sing glorious works, now has over 11,458 subscriptions from all over the world. Singers learn the pieces online and record voice parts from home before these are combined in the studio.

Sunday 1 November, 7.30pm, sees the release of Choirshow 2, a live broadcast of virtual choir videos recorded by 14 different choirs – children’s, community, show and chamber – from across the UK, and edited together in support of Keynsham charity The Music Man Project. On the night, there will be a special live ‘green room’ of the choir directors, a live interval performance and the audience will be able to share comments and celebrate using the YouTube chat function and even join in with some community singing.

“Most of my choirs have been rehearsing on Zoom since lockdown began, but with no real purpose or performance to work toward,” says organiser Matt Finch, musical director for Bath Light Operatic Group. “Some began to spontaneously make virtual videos and we started sharing them on Facebook. The feedback was brilliant, but I soon realised there was just not enough people seeing them. I wanted a way of celebrating the choirs’ achievements and an online concert, in collaboration with other UK choirs, seemed the perfect vehicle and the best way forward.”

A code for each choir involved has been set up to give audience members £1 off their ticket. They can then donate 25% of the rest of their ticket price to the choir of their choice. At the end of the show there will also be a big virtual bucket shake in aid of The Music Man Project – a club where adults with learning disabilities make music with friends and learn about performance, improvisation, and composition. Through the coronavirus crisis, the charity has seen a significant drop in income and has set up an appeal page on Just Giving (justgiving.com/fundraising/choirshow2). “This is a chance for us to make a real difference to many local musicians,” says Matt.

Bristol’s ensembles have been rather busy too…

On 25 March, just two days after the start of lockdown, Bristol’s professional orchestra livestreamed the first of what would become a series of over 40 online recitals. Bristol Ensemble’s At Home series included solo performances and duets by a dazzling array of their musicians, from violinists, pianists and flautists, to recitals by a bandoneonist, percussionists and a harpist. The ensemble has also given outdoor concerts, and created video performances which have reached a worldwide audience, including a special Covid edition of I Will Survive which can be found on their YouTube channel.

Many of the ensemble’s musicians turned to music by Johann Sebastian Bach for their lockdown recital programmes. For many, his timeless compositions are a source of solace, consolation and hope. It was with Bach’s famous Brandenburg Concertos that the Bristol Ensemble returned to indoor performances, with two one-hour concerts in October at St George’s Bristol. They are back in the hall on 15 November with a more contemporary programme of hypnotic and meditative music, as they perform a concert of the music of the Estonian composer Arvo Pärt – tickets are available now from St George’s box office.

In the early autumn sunshine, Exultate Singers gathered in concert dress for the first time since 8 February. With clothes pegs on their black folders to guard against the wind whipping away copies of music, singers positioned themselves around the lawn of St George’s Bristol, finding themselves a spot the regulation distance away from their colleagues, scattered in proud isolation among the shrubs.

Feet crunched on twigs and fallen leaves; stationed on the vertiginous steps leading up to the majestic building’s pillared gallery; they basked in brightness on the patio outside the glinting glass doors of the new extension. Distanced from each other, but singing as though they’d never been apart, the choir’s first post-lockdown concert to a live audience on 20 September was an emotional and joyous occasion for singers and audience alike.

The choir returns to St George’s on 8 November to give two concerts inside. Safeguards against virus transmission include the choir being reduced in numbers to around 20 singers for each of two performances – divided, but, like a candle flame, undimmed. Singers and audience members will wear face coverings. A silver lining will be the extra resonance of the already famously warm acoustic that arises from having fewer human beings in the building. As the choir lends its voices to the programme, entitled Songs of Hope, the music will uplift spirits with messages of light and love.

Bristol Choral Society has sung its way through more than a century. Founded in 1889, it has held concerts every season since, featuring both classical repertoire and contemporary music as it emerged – Elgar, Tippett, Vaughan-Williams and much more. This year has seen a new venture: conductor Hilary Campbell has inspired the choir to produce its first ever recorded CD on the Delphian label, featuring music by Cecilia McDowall, Bob Chilcott and Judith Weir and recorded at St George’s Bristol. All three are living composers and the CD presents a premiere recording of McDowall’s A Time for All Seasons – an evocative reflection on time and ageing, appropriate perhaps for such a momentous year as 2020 – and Weir’s The Big Picture, the title of her masterpiece of musical colours created for Aberdeen Art Gallery in 2019. Making the CD was a challenge but now it is an object of pride and joy, an achievement for the ensemble and a marker for posterity. In Chilcott’s Songs and Cries of London Town, the brilliant young singers in the Bristol Youth Choir play a prominent interweaving role with the older Londoners in the choir.

Together, these pieces are essential listening as an escape from the current crises, into a world of creativity, and the experience of putting together the CD has been something the singers say they will never forget. They found producing it was nothing like performing a concert, with every detail, every consonant having to be exact, the balance of voices having to be perfected, and nothing left to chance. They had brilliant soloists in soprano Nina Bennet and Ian Tindale and Annabel Thwaite on piano and keyboard. Listen out for Hannah Lawrance’s clarinet opening too – this is more than simply a choral experience – and check out the podcast on the Choral Society website, featuring musicologist Katy Hamilton in conversation with Hilary Campbell and with each of the composers.

Fortunate to be able to perform their 14 March concert at St George’s Bristol just before the lockdown restrictions came into force, Bristol Concert Orchestra’s rehearsal room fell sadly silent afterwards. Recent times, however, have seen a socially distanced return, and the orchestra is hoping to be able to stage some kind of performance soon with a mixture of small live audience and online viewing.
In addition to the three main season concerts annually, every October the orchestra stages a free concert of music for children – typically shortened versions of classics such as Swan Lake. These are incredibly popular – reaching family audiences of over 6,000 in total since inception – so it was a shame this October was without this annual dose of musical inspiration for the next generation. However, it is likely that the upcoming performance will be of the family-friendly variety, so do check the website for news.

“This might be the last cultural event for a while,” conductor David Ogden told the audience just before City of Bristol Choir’s poignant performance of Duruflé’s Requiem on 14 March in All Saints’ Church, Clifton. Little did he know how true and understated these words would be, but, after almost exactly six months’ silence, thanks to thorough planning and the writing of copious risk assessments and emails, the choir started rehearsing regularly again at St Matthew’s Church. What piece to start with? It could only be a setting of Siegfried Sassoon’s poem Everyone Sang: Everyone suddenly burst out singing / And I was filled with such delight / As prisoned birds must find in freedom…

“We had been caged birds, released to find what we had been missing for so long,” says David, “experiencing not only the sound of our voices but a renewal of the camaraderie and friendly atmosphere of rehearsals. Of course, things were not as they were before – we were socially distanced with masks, but isn’t it amazing how expressive one’s eyebrows can be? We send recordings of the rehearsals to those who are unable to attend. We all listened to them, amazed, despite the restrictions, at the quality of sound, the energy and emotion that we managed to pour into the music.”

O, but everyone was a bird / And the song was wordless / The singing will never be done.

Previous
For composers, by composers