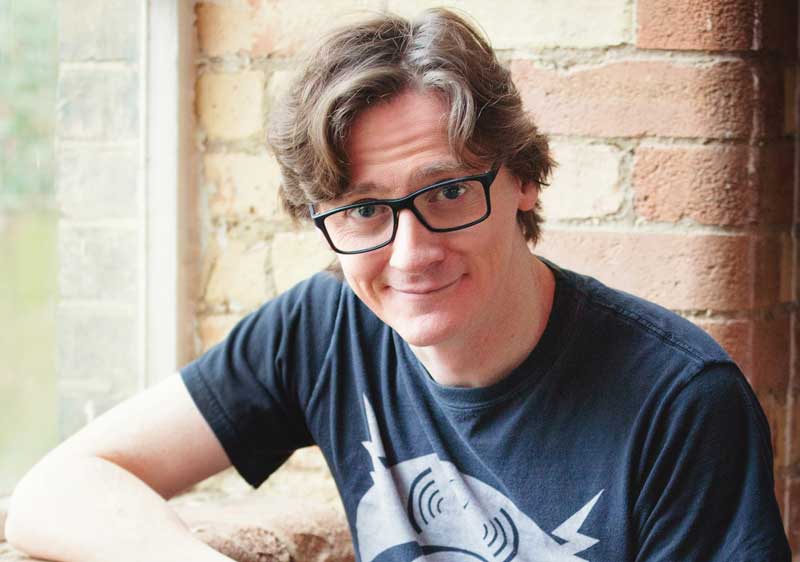 Ed Byrne has been an acclaimed stand-up, with audiences and critics alike, for 20 years now. His success with shows such as Roaring Forties, Different Class and the 1998 Perrier-nominated A Night At The Opera, led to him appearing on the box in the diverse likes of Mock The Week, Father Ted and All Star Mr & Mrs, while his love of natural history has also crossed into television, seeing him abseil in Snowdonia for The One Show; on Countryfile, climbing Sgùrr Dearg on Skye; on BBC Two as part of a travelogue show with Dara Ó Briain; and presenting items on the BBC’s Volcano Live – his fondness for hillwalking also resulting in a regular column for The Great Outdoors magazine.

But in his latest touring show, the Irish comic focuses on family life, on home soil, and his firm belief that the current breed of parents spoil their kids rotten, whether it’s to do with the ever-increasing size of garden trampolines, or his own kids’ demand for elderflower cordial.

“My dad wasn’t a bad dad, he was just a 1970s dad,” he says. “I could never see my children ever again from this moment on, and I’ve already done more parenting then he did in my entire life. But, of course, I made a conscious decision that I was going to be an awesome dad. My wife will come back with tales from her friends of how awful their husbands are and she’ll see me smiling and say ‘Alright, stop congratulating yourself just because such-and-such can’t be left alone with their children for two minutes’.”

The aptly-titled live show Spoiler Alert sees Ed compare and contrast the old-school child-rearing days with 21st-century methods and suggests that there are different ways to learn how to be a mum or dad. “I grew up in what I would call an aspirational household in that my parents bettered themselves over the course of my childhood,” he says. “My mother was a radiographer and ended up a lecturer in radiography, while my dad was a sheet metal worker and went up to a supervisory role. I’d still say that you are expected to do a lot more parenting than our parents did and that’s a weird thing because you tend to think that your parents are where you learned parenting from. But you don’t, really – it’s more that you look around you to see what’s going on with other parents.”

Ed extends his analysis on the culture of entitlement to look at areas where we could perhaps do with being spoiled a little bit more. “Where I think we’re not acting spoiled enough is in the political arena,” he says. “We have a tendency to accept what’s happening and that’s where we should be acting more entitled: we are literally entitled to the government we want. We’re spoiled in all these little ways, but not spoiled enough.”

As well as stories about his two young sons, Ed weaves in routines about running out of petrol in the most awkward place imaginable, helping rescue an injured man in the Cairngorms, and the nation-dividing campaign and result of the EU referendum. His way of tackling Brexit is to draw an analogy with the time his son was determined to touch an electric fence with his dad trying to warn him of the dangers.

“I was telling the story of the electric fence for a while, and then suddenly it struck me that it was Brexit in microcosm,” he recalls. “I don’t want to alienate half of the population or maybe a third of my audience, but it works as an analogy whichever side you’re on. The government told you not to do this and that it would be a terrible idea, but you said ‘no, we want to do it anyway’. So now we’re doing it and it’s proving a terrible idea. I do think it’s a fair analogy but, no doubt, for some it will come across as me being a typical liberal elite Remoaner.”

Loyal fans may well recognise a continuing theme that Ed has tackled in previous shows – that of his gradual shift from being a working-class Dubliner to a fully paid-up, rurally-residing member of the middle classes. Where once he would do routines slating 4×4 owners, he is now the proud(ish) owner of such a vehicle. And in the poster for his tour, he brandishes other signifiers of social mobility: a bow-tie and chainsaw.

“It’s one of two I own: that one is the smaller of the two,” Ed remarks, of his chainsaw rather than his neckwear. “I use it for firewood, both for my wood-burning stove and also for the barbecue. The first time I used one I was fine, though I think it worried my parents that I had bought a chainsaw.”

Having premiered at the Edinburgh Fringe and toured around the country since September last year, as part of an extensive series of dates, Spoiler Alert is pretty well-honed. “Being on stage is enjoyable and this part of the writing process is enjoyable,” Ed says. “The empty page, though, is a scary thing. On the first leg of a tour I’ll do about an hour and 15 minutes, plus I’ll have a support act. I keep a tour diary now of places where the curries are disappointing and where they are good and where audiences have been good before.”

Well, of course, we Bristol folk are great, and we’ve the best curry in the country according to the Asian Curry Awards, so Ed’s Colston Hall date should be a top gig all-round. The show arrives on 8 March – go and spoil yourself.