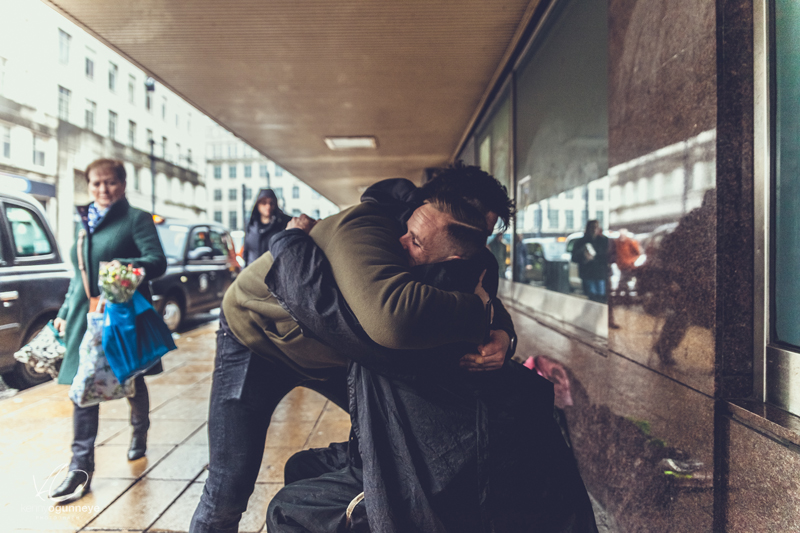 Millie Bruce-Watt catches up with Eddie Ilic – an inspiring figure on the streets of Bristol, cutting hair for the homeless and offering time to those who need it most

After salons were given the green light to safely reopen in July, Eddie Ilic and his army of 30 hairdressing heroes returned to the streets of Bristol to spread kindness and positivity, giving their time, free of charge, to cut the hair of the city’s homeless.

Four years ago, at the age of 21, Eddie set up Eddie’s Street Cuts while working at BA1 Hair in Bath, volunteering with the homeless charity Julian House (julianhouse.org.uk) and recovering from his own addiction to drugs and alcohol. Following a 12-step programme, he wanted to give back to the community and communicate a message to those struggling with the disease – a message that saved his own life five years ago. Since then, Eddie has been performing random acts of kindness on the streets of Bristol and Bath, aiming to boost people’s self-esteem and show love and care for those who are far too often forgotten.

“For me, this is a huge part of my service to the 12-step programme. To be able to keep my recovery, I’ve got to give it away so by doing this I can help the homeless people, I can share my experience of my drug addiction and I can pass on a message of hope, which is they don’t have to live the way that they’re living – there is a solution.

“We meet quite a few men and women who haven’t had human contact sometimes for a day, a week or even longer. For us, it’s about giving them a haircut, making them feel really good on the outside, but also it’s about giving them their dignity back and boosting their self-esteem. We hear so much from our street friends; much more than what a social worker would hear – they’re sat in the chair and they feel safe. We’ve got trust between us. A lot of these men and women haven’t been able to offload these personal demons or issues before.”

Over the lockdown period, Eddie and his team were unable to cut hair due to the government’s restrictions in salons but on 22 July they hit the ground running, and set up an open event at Bristol Outreach Services for the Homeless (BOSH; bosh.org.uk), inviting people to come and get a haircut. “In between this lockdown and the last lockdown, we’ve been busy on our feet, which has been amazing; to be able to help out where we can.

“It’s difficult times right now, and everyone has been affected directly and indirectly by Covid. I’ve seen a rise in homelessness in Bristol especially. When we were at BOSH the first Sunday after the lockdown was lifted, we cut about 50 people’s hair, and then the next month it was double.”

The responses Eddie and his team receive are always ones of joy, and far too often ones of disbelief. “Time, acknowledgment, a smile; those simple things can really change someone’s day and potentially change someone’s life. Spending five minutes of your own time going to talk to someone who hasn’t had that human contact in a day or in a couple of days or even a week – that can mean so much to someone and it does much more than money can do.”

Eddie’s desire to give back and help others appears to be very much in his make-up and he often travels with his scissors on the off-chance he can lend a hand. “Whenever I go on holiday I’ll bring my scissors so, if I go to Naples or Paris or Brighton, I’ll cut people’s hair on the streets. Most people say, “I’ve never had this done before” or “I’ve never had my hair cut on a park bench before” and some of them have opened up to say they haven’t had a haircut for over a year or two years. The response that we get is priceless.”

The winter period and the festive season can be a truly dark time for some people, especially those experiencing homelessness. Eddie encourages anyone who wants to do their bit to donate to the charities working tirelessly to support them. “It’s hard at any time of the year but especially at Christmas where it’s also getting colder. For anybody to just give their time and maybe make little Christmas boxes and start giving out jumpers and warm clothing – it would mean so much.

“If people are thinking about what they can do for homelessness this year, maybe put £10, £50 or £5 into a local charity where that support and that money will go towards helping the homeless.”

This year, Eddie and his team are spending their Christmas Day with Caring in Bristol. “They’re setting up a day where they’ll have food and everything else and we’ll do some hair cutting. We’re looking forward to helping where we can.”

Eddie’s journey has been an inspirational one and it is far from over. “We’re hopefully going to set up an academy next year where we can teach ex-offenders or ex-homeless people the basic fundamental skills of barbering,” he says.

“They’ll be going on a six-month express course so they can get a qualification. It’s still very early days but that’s the goal of Eddie’s Street Cuts, so we can teach the disadvantaged, the young or the people that have just come out of prison and give them a second chance.”

Ultimately, Eddie’s message is one of kindness this Christmas. “It’s important to not judge. Homelessness could happen to anyone. I think that’s the message as well, to have less of a judgement and more of an understanding of it.

“Eddie’s Street Cuts has been such a huge part of my recovery and I am so thankful for the 12-step programme – it’s allowed me to do something like this. Without my recovery I wouldn’t be here today cutting hair and passing on this message of hope to young people who I can identify with so much.”

Update: With Bristol remaining in tier 3, Eddie tells TBM that he won’t be able to cut hair with Caring in Bristol on Christmas Day but will still take to the streets of Bath and Bristol to give a helping hand to those who need it most.