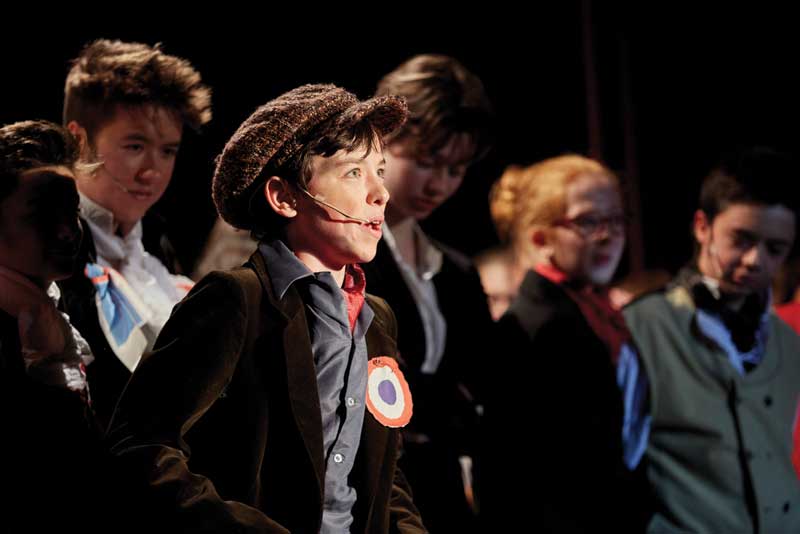 Don’t underestimate the power of the arts and their impact on adult life, say Bristol schools

Cuts to the creative arts are always controversial – it’s widely agreed that these subjects can help develop self-confidence, discipline and imagination; stimulate creativity in problem solving and challenging perceptions or worldviews; and promote communication, cooperation, social awareness and empathy. Some studies have even shown a correlation between academic achievement and involvement in subjects such as drama; perhaps the emotional outlet it can offer allows for improved focus day to day. With many viewing theatre-making and the arts as an integral educational component that preps kids for the outside world, there is the worry that lack of funding will close off such areas and make them elitist once more.

“It is a challenging time for arts subjects within many schools – STEM subjects are increasingly selected for further study while, nationally, GCSE entries for the arts have dropped by 34% since 2010,” says Rhian Orzel, head of drama at Clifton College. “We recognise that drama and the arts are critical in ensuring that students receive a well-rounded education that develops them as individuals and academics. It provides opportunities for exploration, creation and expression which help pupils develop the ‘soft skills’ desired by many industries.

“Facilities such as The Redgrave Theatre, Joseph Cooper Music School and a dedicated dance studio really allow drama to flourish at Clifton. Drama students develop skills in areas such as public speaking, presentation, communication and collaborative working; all highly sought after transferable skills that will support them through university and in their working lives.”

Redmaids’ High School is fortunate to have a number of performance spaces within its campus, including the recently unveiled Redland Hall, opened last September by former Redmaid, author, anthropologist and TV presenter Professor Alice Roberts. Equipped with a flexible seating and staging system, plus a full lighting and sound system, it’s even being booked by professional orchestras and ensembles.

This summer a group of students were taken to the Edinburgh Fringe with a production of Carol Ann Duffy’s lyrical adaptation of the Grimm Tales – choreographed, stage-managed and co-directed by the girls themselves to give them experience in making and presenting theatre in a real-world context. As arts education dwindles in some schools, the girls’ Crook and Ivy group has aimed to show what can be achieved by talented young women when they are given support and a platform.

“Drama is absolutely fundamental to the emotional and psychological growth of every person and we forget that at our peril,” says Sarah McCormack, head of drama at Redmaids’. “All our systems of thought, our social structures and systems of government derive, in part, from the origins of theatre – from the understanding that we can engage directly and fully with the experiences of others and so create a world in which everyone has the right to be understood, to be heard.

“If we take drama out of schools, we are eating away at the foundations of the very means by which we understand who we are. In these days when our communication is increasingly dominated by the solipsism of social media, it is all the more important to retain a space in our education system where we articulate our links with each other.”

As Sarah passionately explains, drama in school teaches history and culture; helps develop important life skills, coherence of thought and moral awareness; encourages social interaction and helps students understand who they are and what really matters to them.

“In addition to productions in Redland Hall, we have strong links with the Bristol Speech and Drama Festival, Tobacco Factory Theatres and the Edinburgh Fringe Festival, where we regularly perform. We also run regular theatre trips to inspire a love of quality drama and performance. Because, if nothing else, helping students to engage ‘in the world within’ is one of the greatest educational gifts we can offer.”

The subject is given great emphasis at The Downs School too, where head of drama Margaret Hobbs takes great pleasure in watching student capabilities broaden and develop. “They gain important life skills that are not just essential for the stage but for their future lives,” she says. “Drama is used as a tool in all areas of the curriculum; to bring the subject to life and give balance to a well-rounded education. As well as having fun, children learn to control their nerves and cooperate. They develop the skills to stay focussed and improve their speed of thought and imagination. This awakening of each individual’s talents makes my job a real joy. Our children develop a love of performing together, from the nativity play in Reception, to the annual plays for each year group, and finally writing and performing their own Year Eight revue.”

“Drama is a unifying force,” agrees Jennifer Walker, director of drama at Bristol Grammar School. “It doesn’t discriminate. It doesn’t care about your gender, class, ethnicity, confidence, knowledge or even performing ability. One thing I always tell my younger classes is that drama is a social subject. It, quite literally, forces you to interact with people; to speak and to have a discussion, to play, to work together, to provoke, to mediate, to understand and to consider how to communicate with people on every level.

“Schools build a culture around drama. We forge a bond, a togetherness, from productions. We work together as a company to put on a show – the experience of doing that, of feeling like you belong and you made a difference and told someone a story, can be life-altering for a child. Drama is all about make-believe, but principally, it is about making children believe in themselves.”

Clifton High School uses drama to inspire pupils beyond the curriculum, encouraging them to reach their potential and achieve individual ambitions (‘realising individual brilliance’ is the school’s tagline, to celebrate each child for who they are). “Our most recent productions of Sweeney Todd and Les Misérables have been a testament to the ambition and dedication of cast members and staff,” they told us. “Working together toward a shared goal develops a real sense of community and can offer an excellent opportunity for new arrivals to become quickly integrated.”

At Badminton, which counts actresses Phyllida Law and Rosamund Pike among its alumnae, drama is regarded by the likes of Lucy Griffith, assistant director of studies (liberal and creative arts), and Jennifer Rose, head of drama, as an important tool that allows students to work as a team and learn to be tolerant of those around them. “Year Seven recently collaborated to produce a musical in a week, performed to the school and to parents,” they told us. “It’s a challenge, lots of fun and serves to cement the year group in its identity, making a firm foundation for learning and for supporting each other in the years to come. Drama can be brought into all subjects and allow students to be more expressive in their work, creating learners who think outside the box. We encourage the use of drama within the classroom through the idea of ‘learning by doing’.

“Last year our history students enacted the story of the 1,000-year history of Westbury Parish Church. Humans are driven by a need to be creative and drama is an important way to channel this energy. Every year individual students leave Badminton to pursue careers in the subject – students such as Polina Kalina who, having first visited Tobacco Factory Theatres as a Year Nine student, returned as the guest director for a sensational, bold production of Romeo and Juliet in 2015.”

Pip Hockenhull, director of drama at Queen Elizabeth’s Hospital school, shares the view. “By placing themselves in some else’s shoes, by exploring other lives, places and times, students can experience profound understanding. The collaborative nature of creating drama, challenges and pushes students to learn about their own strengths. “Only a small number of students will go into acting as a profession. To think that drama in schools is simply preparing students for a career in the industry is to misunderstand its purpose. Creating drama in groups, performing to others and sharing the same space is a wonderful, life-affirming thing for them to experience. The arts are how we make sense of the world and we cannot let these subjects be marginalised.”