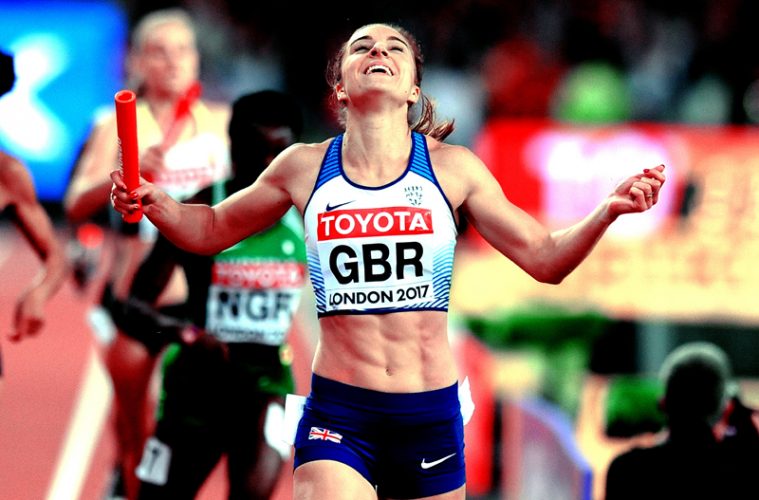 Jessica Hope talks to a Bristol-born, silver medallist sprinter about her successful career, and solicits her advice for the young, budding athletes of the future

Following the impressive results from the IAAF World Championships in London over the summer, no one can deny the talent the Great British athletics team has when it comes to running. As well as securing six medals, the squad achieved five fourth places, demonstrating the sheer talent coming up through the ranks – there will certainly be some British athletes vying for medals in future competitions that other countries will be keenly looking out for.

One of the stand-out championship moments, in my opinion, was watching Britain’s 4×400 metres women’s team sprint with determination to silver medal victory on the final night of the competition, in front of a roaring British crowd. The athlete whose job it was to run the final leg of that relay, with the pressure of the Polish team right on her tail, was Bristol-born Emily Diamond. Cool, calm and collected, the 26-year-old ran a clear leg, gaining distance on the runners behind her to secure second place for herself and her team mates Eilidh Doyle, Zoey Clark and Laviai Nielsen.

I asked Emily about the victory and how she felt, being the last one on the team to run in the race. “It’s a pressure leg to run last in the relay,” she says. “You really have to be able to hold your nerve and hold people off. If you have a bad leg earlier on in the race, there are people after you who have to make up for it. But running last means there’s pressure to get over the line, and you don’t want to have a bad last 100 metres. I didn’t want to lose the opportunity for the silver medal. I just had to make sure that there was a big enough gap to get away from Polish runners.”

Born in Southmead Hospital, Bristol, Emily spent the majority of her childhood living in Clifton. She grew up with the influence of athletics around her, with both her mother and grandmother being competitive long-jumpers, and her grandad a sprinter. “Mum’s parents started off the athletics love in the family, and they all love that I am carrying it on,” Emily tells me. “Both my grandparents won English Schools’ Athletic Association medals when they were young and I think they met while competing, so they are very proud and supportive that I have gone down the same route.” So how did Emily first try her hand at athletics? “My mum took me along to Whitchurch Athletics Running Track when I was really young – I think I was probably still in primary school. I was too young to be involved in the outdoor training sessions, so I started doing indoor sessions and I also played a lot of tennis. “It was when I moved to Bristol Grammar School, where I had so many opportunities to try new sports. BGS got involved in lots of inter-school athletics competitions, which I loved, so I swapped from tennis to athletics,” she says.

Aged 15, Emily began considering a career as an athlete. “Mum took me to the University of Bath and I began doing long-jump sessions a couple of times a week, just because that’s what mum had trained to do. The coaches there then saw my ability for sprinting.”

So began the transition from long jump to running. “I used to take part in long jump at school athletics competitions and then just rock up at the sprinting races and try my hand at that. And if you’re quite successful at something then you tend to enjoy it more, so I started to focus more on sprinting.”

After finishing school, Emily was awarded a scholarship to read sports and exercise science at Loughborough University. “The university was an amazing support,” she remembers. “The scholarship system helped me financially, and we had mentors for university work if we were struggling.”

It was during her final year that Emily found out she had been picked for the Great British team for the London Olympics in 2012. Despite only running the 400 metres competitively a handful of times, Emily was chosen to be a reserve for the women’s 4×400 metre team. “At the time, the Olympics wasn’t really even in my sights, so I was just in awe of everyone there,” she says. “I met lots of my idols, like Jessica Ennis-Hill and Nicola Sanders, and I just took in how everyone else worked and carried themselves.”

With this experience under her belt, Emily was driven onwards to great success in 2016. Just a few weeks after winning the gold medal in the 4×400 metre relay at the European Championships in Amsterdam, Emily was on the podium again – much to her surprise after a dreadful bout of food poisoning – this time winning bronze in the same event at the Olympics in Rio. “We knew we had an opportunity to grab the bronze medal and we thought we were more than capable of getting it. It was one of the best nights of my life,” she smiles.

The success didn’t stop for Emily and the relay team when they competed in the IAAF World Championships in London earlier this year and secured a medal on home soil. “The noise the crowd produced was something I’ve never experienced before,” she recalls. “The arena is like a fishbowl, so all the sound goes down onto the track and it is like a Mexican wave of noise as you run.

“When I got to the final 150 metres, I wasn’t sure whether the crowd were shouting because the runner from Poland was catching me up or cheering because we were so close to finishing second. Not many people get the chance to do a lap of honour in front of a home crowd, so that was an amazing experience.” In order to get these incredible results, Emily trains at the University of Bath six days a week for two to three hours a day. “The university has been excellent in helping with providing facilities and coaches,” she says. Emily is coached by former European Championship gold medallist sprinter Jared Deacon, who really helped guide her to success. “He’s put together great programmes of training for me and knows what it takes to win medals. The main challenge of having him as a coach is that he works in Scotland. So we keep in touch as much as possible and I video my training sessions and send them to him.”

As well as having a gruelling training programme, many athletes do not receive enough funding to train full-time and so take on extra jobs. Up until March 2017, Emily worked at Prior Park College in Bath as an administrator in the sports department. “The school was so supportive in letting me have time off for competitions and training. I loved that job, especially because I love organising things, and the staff were amazing. But I knew that I needed to leave in order to get to the next part of my career.”

Away from the track, Emily enjoys visiting schools and local clubs, including her former training club Bristol and West Athletic, to meet young people and inspire them to become professional athletes. “I spoke to some young athletes recently and showed them my medals,” she says. “I talked to them about how I’ve been in their shoes, and told them that if they carry on with their training, then they could win some of their own medals in the future.”

So, can she impart any advice for young people considering going into athletics? “Just give it a go. Try not to focus on just one event – do as many as possible and see what you enjoy. Your abilities in different sports can change over the years, so it’s good to try a variety. Also, listen to your body – learn the differences between bad pain and good pain, and make sure you take an extra rest day if your body needs it.”

And what about the parents and carers of children with athletic potential? “Parents need to learn how to speak to a child after they’ve had a bad performance,” Emily advises. “To understand how to listen to the child and work out how they can deal with these situations. I would recommend reading The Chimp Paradox by Professor Steve Peters – it is a great book that can help parents learn the psychology of helping a child with training and dealing with bad results.”

With her sights set on the Commonwealth Games in Australia and the European Games in Berlin and Glasgow next year, Emily will certainly be one to watch for more medal glory in 2018.