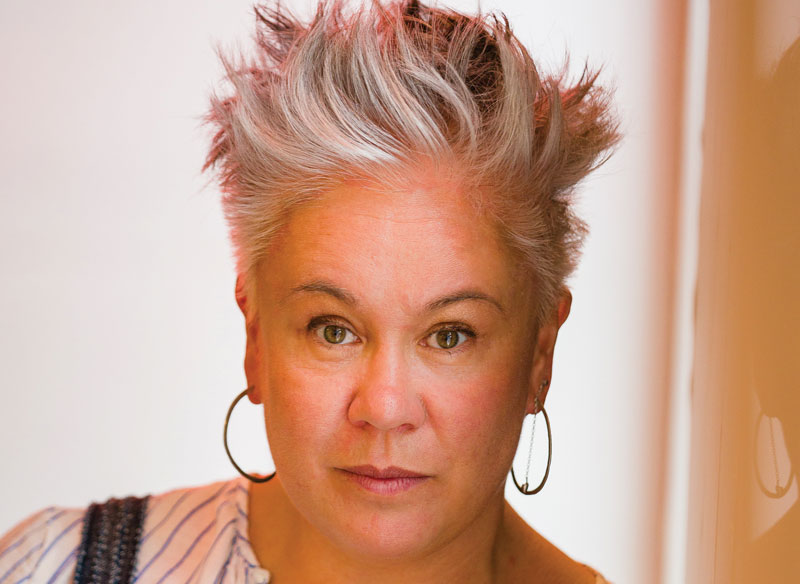 After a turbulent few years in London, director and theatremaker Emma Rice has come home to set down creative roots in Bristol. As her first show with her new company opens, she explains to Daisy Bowie-Sell why she couldn’t be happier. Photography by Steve Tanner

I am rarely daunted by anything, which may really be my downfall,” says Emma Rice when we meet on a wet and vigorously blustery afternoon at her new company’s home in Spike Island. “Most of the time it works out, then sometimes it jumps up and bites me on the arse.”

But there will be no bum-biting when it comes to Rice’s most recent endeavour – a music-infused, raucous and ultimately heart-warming adaptation of Angela Carter’s remarkable and sprawling 1991 novel Wise Children. It is glorious – full of the kind of mad magic and mayhem that Rice’s years directing Cornish travelling company Kneehigh instilled in her. Wise Children opened in London at the tail end of 2018, and this month you can see it in Bristol.

Of course you can – Bristol is now the permanent home of Rice and her company – also called Wise Children – which she launched in April. This is the first time she will be based here professionally but she’s no stranger to the South West. Her grandfather was Bristolian and she joined Kneehigh in Cornwall in 1994. Her work there – including The Red Shoes and an adaptation of Brief Encounter in a West End cinema – has toured nationally and internationally. Still, she explains, her decision to live here had an element of a lightening strike: “When we met, my partner was living in London and I was living in Cornwall. We put a pin in the map.”

Still, Rice always had a sense that great things would happen in Bristol, she explains to me, with her signature beaming smile. And perhaps one of these great things is Rice herself. It was Bristol’s gain and London’s loss when, after only two years as artistic director of Shakespeare’s Globe (the first woman to head up the venue and only its third artistic director) and following a furore around the use of electric lighting in the space, she left London and arrived on the banks of the River Avon ready to start anew.

Whatever she was going to do next, she knew that the stage adaptation of Wise Children would be at the heart of it. The show was originally commissioned by the National Theatre but the artistic director in charge stepped down before she delivered her first draft. She hoped to stage it at the Globe “because it mentions 34 of the 37 Shakespeare’s plays” – so when she left, there it was. Waiting for her.

“It was a no-brainer,” says Rice. “This illegitimate project was waiting for a home and there I am, about to set up a new home that I hope to be in for the rest of my creative life. And what a perfect story to start with.”

Indeed it is. Carter’s novel is about making your way, finding your own family and brushing off adversity with a touch of rouge, a bit of glitter and a soupçon of Champagne. It is Shakespearean in its sense of real life and love and in its bawdy humour. It follows two ageing showgirls, now 75 and living in a crumbling house in Brixton, London. They tell their life stories in flashback, from the point their madcap naturist Grandma Chance took them under her wing to their time on stage, in Hollywood and beyond. Rice has created a colourful, exuberant adaptation, playing with gender and race in her cast (“I have a black man playing the same character as a middle-aged white woman, and that’s no problem”). In fact, she admits that this might be the most exciting casting work she’s done yet.

And it was all created in or around Spike Island, which Rice had in mind as the home of Wise Children when she was first forming the company in her head. She decided it would be “good to walk into a gallery rather than a theatre building,” surrounded by artists, printmakers, sculptors. Her plans for the future are ambitious and she talks about the potential for Wise Childen, in a few years, to be joining her Spike Island neighbours and creating a book or a work of art.

The School for Wise Children was also an important part of her idea for the new company. It offers training for people over 18 who “want to make theatre in a different way”. Acutely aware that performing arts colleges are rapidly closing, she wants to plug the gap and offer those who wouldn’t usually get access to the training the chance to sign up. There are plans afoot for some “crazy” things for Bristol too, and the use of her Temporary Utopia Caravan kit – or Tuc Tucs – will enable her travelling band of players to rock up anywhere at any time and burst out into a show. Watch this space.

There’s no two ways about it: Rice is clearly entirely delighted to be home. “I feel great. If you’d asked me at any point in the last two years, I would probably have said the same but not meant it,” she says. “I feel genuine relief, excitement. It’s like a fresh new chapter.”