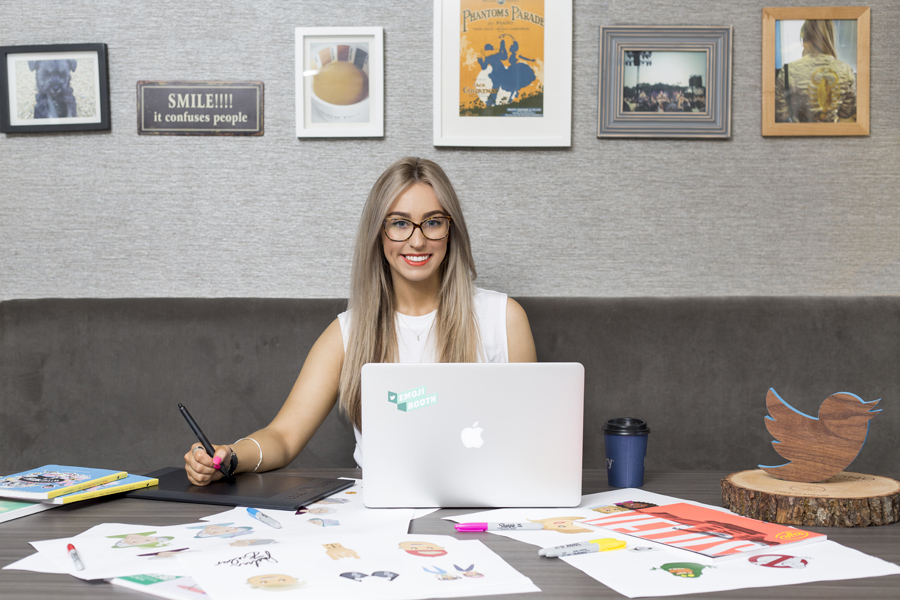 We chat to Emma Hopkins, the Bristol-bred creative leading the ways of modern communication on Twitter… Words by Bethan Andrews

“Did you know that the most used emoji in Bristol is the watermelon?” laughs Emma Hopkins, a creative specialist who is quite possibly more down-with-the-kids than the kids themselves. Having grown up in Bristol, and inspired by our arty, tech-savvy city’s pioneering ways, Emma has forged a crazy new design route of her own, to suit our increasingly digital world. We reckon you’ll probably be familiar with her work too – as it’s her job to design the Twitter emojis now assimilated into our everyday social media comms.

Of course, the world has gone mad for all things imagery. Heck, the laughing/crying face emoji was even the Oxford Dictionary Word of the Year in 2015 (apparently it is officially known as the ‘Face with Tears of Joy’ emoji). While they might be tricky to describe, emojis can accurately sum up emotions, objects and people in one little pictograph, and the widely used ‘Tears of Joy’ was chosen as “the ‘word’ that best reflected the ethos, mood, and preoccupations” of that year. Perhaps unsurprisingly, then, Emma has become something of a wonder over the last few months, appearing on the likes of The One Show and in Marie Claire magazine to talk about her unusual career. We love Emma’s Bristol emojis…recognise any of the landmarks?

Like the evolution of the digital world, it all spiralled pretty fast for Emma though, even having studied graphic design and visual communication at Bath Spa University, it wasn’t something she really foresaw. “I applied for a job at Twitter as a sales designer where I predominantly worked on B2B and event design materials,” she remembers. “One day I was asked to do some X Factor emojis and they went down really well. From there, it developed into me doing all the emojis for Twitter and that’s now my entire job.” While the pictograph has experienced quite the rise over the last few years – it has even made the headlines on occasion – Emma’s is a very new career path that has opened up, so who knows how it will develop? “It’s something I see continuing to grow,” says Emma. “I did wonder at first if it would just be another fad, but it just keeps gaining popularity. I can see it as a career that young people might aspire to be a part of, due to the way I’m immersed everyday in popular culture.” Although we might quickly apply an emoji to a tweet or a message without a second thought, it’s actually quite a complicated task to design one and ensure all the necessary detail is packed into one very tiny square. It all depends what’s going on in the world at the time or what is trending on Twitter, too. So, for example, during the Brit Awards, Twitter aims to drum up conversation around that and get fans more excited. “You have to think about what the fans are going to enjoy, so do they want to see a Brit Award or do they want to see faces, like One Direction, Adele or Justin Bieber?” Emma explains. “From there, I go in to researching. When Adele brought out her new album, she came back with a new hairstyle and she’s very famous for her eyeliner and lipstick – so I ticked these off as important elements. The length of the design process depends on how detailed or abstract they are, and they have to be approved by art and management too.” Of course, they have to be made instantly recognisable to be successful as well – a skill Emma has honed while illustrating everyone from 1D to the Queen and Shakespeare – and there are no-nos such as using bright neon colours, because on such a small scale you simply don’t see them.

Art and creativity have always been a huge part of Emma’s life, and her passion has seen her career take many different turns, from illustration and branding to her current work – all of which she sees Bristol as the definitive starting point for. “Bristol inspired me as an arty city,” she recalls. “I love it – it feels like a mini London, and I love North Street and all the graffiti. It helped to feed my talents growing up, as the culture is so creative and you’ve got amazing places like the Arnolfini on your doorstep.” Emma loved growing up with creative hubs like Arnolfini on her doorstep. Image © Max McClure

So what advice would she offer those hoping to follow into a similar career in modern design? “Practice the things that you can’t do – when I was studying, I learnt quickly that the internet and digital design was the way forward, so I pushed myself in those areas,” she says. “Always keep an eye on where the industry is heading.”

And we’re longing to know, as we struggle to think of anything to explain it rather than a possible proclivity for a nice bit of juicy gossip, if Emma can offer any insight into why exactly the watermelon, of all things, is so beloved in Bristol… But she’s at a loss, herself: “Who knows,” she laughs, “it’s a weird and wonderful language!”

Find out more about Emma Hopkins’ work at emmahopkins.co.uk