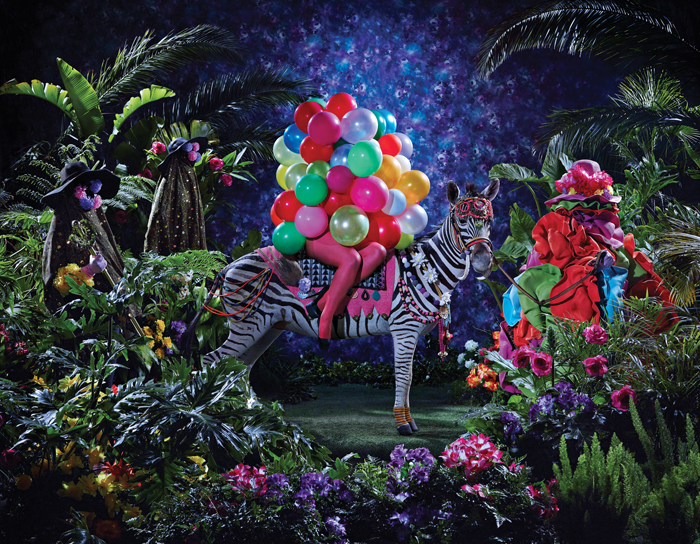 This group of contemporary photographers, primarily concerning themselves with the interrogation of ideas of ‘Africanness’, are revealing the continent to be a psychological space as much as a physical territory; a state of mind as much as a physical location. That’s according to Bristol’s Royal West of England Academy, which is this month sharing with the city subjective renderings of African life and identity by 15 artists from 10 different countries, to give an overview of the new photographic practice.

With photography being the art form that, more than any other, has framed how Africa is represented in the modern era, it’s a particularly significant medium by which to explore the continent. Colonial period photographs depicted its people as wild and untamed; TV news reinforced an impression of a continent defined by famine and war. But photography has also enabled the dissemination of more positive, contrasting views. The new generation of African photographers are now capturing life and landscape, and looking inwards to explore questions of gender, sexuality and identity as they seek to capture the experience of what it means, and how it feels, to live in Africa today.

The modern African city is documented in all its dynamism and contradiction. The fluidity of gender and sexual identity is addressed through compelling portraiture, while the legacy of history, from slavery and colonialism to apartheid, becomes the source of resonant new myths and dreamscapes.

The show at RWA is oriented around three main themes: firstly, ‘inner landscapes’ which focuses on photographers whose work offers a personal interpretation of setting or sensibility, in contrast to, say, the objective lens of reportage photography. Secondly, the ‘hybrid cities’ theme documents the African metropolis as a site of rapid transformation, with the urban photography of Sammy Baloji, Michael Tsegaye and Emmanuelle Andrianjafy revealing how communities are evolving new ways of living and organising and creating autonomous spaces within the sprawl of the city. Finally, ‘zones of freedom’ brings together photographers whose work explores questions of gender, sexuality and cultural identity. Homosexuality is outlawed in 34 of Africa’s 55 nations and socially conservative views on sexuality and gender are widely voiced, although not universally shared. Against that backdrop, the decision of photographers such as Sabelo Mlangeni and Eric Gyamfi to focus on the lives of LGBTI+ individuals and communities has a powerful resonance.

“This is a unique time for African photography,” believes curator Ekow Eshun. “There’s a wave of thrilling, artistically ambitious talent emerging across the continent. ‘Africa State of Mind’ isn’t trying to be a wholesale survey of that work so much as an attempt to offer insight into some of the key tendencies and themes informing the practice of those photographers. It’s about opening up new ways of looking at and understanding what it means to live in Africa, and be African today.”

The exhibition takes place at a time in which popular Western views of the continent still remain limited, she says. “On one hand, there is an ‘Africa rising’ narrative, that celebrates the development of an emergent middle class and the growth of a tech sector driven by a young aspirational population, while glossing over the inequalities of income and opportunity that still stymie social progress in many countries. On the other hand, the reductive stereotype of Africa as a land of would-be migrants and corrupt rulers. A vision given ugly validation by President Trump’s description of its nations as ‘shithole countries’.”

The exhibition draws inspiration from the work of the Senegalese economist Felwine Sarr, who has called for a fresh consideration of how to understand Africa and speculates about a new Africa conjured into being by artists, thinkers and cultural actors; creative figures whose work is intent on articulating the contemporary lived experience as a thing of nuance and imaginative reach.

It runs in conjunction with ‘Refuge and Renewal: Migration and British Art’, a new exhibition exploring innovation and cultural cross-fertilisation resulting from the migration of creative individuals and groups since the First World War. The main focus is the crucial influence of émigrés who came from eastern and central Europe during the 1930s and 1940s. However, it also looks back to the temporary exile of refugees from the First World War (especially from Belgium) and forward to the present, when the reception of refugees from war-torn Iran, Iraq and Syria and their contributions to British life are more contentious than ever. “These two powerful exhibitions demonstrate and celebrate the immense cultural enrichment flowing from international migration,” says RWA director Alison Bevan. “It is particularly relevant that we should show these exhibitions here in Bristol, a city that – for both positive and negative reasons – has become home to people from all parts of the world for more than 500 years and now boasts speakers of 91 languages (including Somali as the city’s third most commonly spoken language). The RWA’s exhibitions seek to reflect the diverse communities on its doorstep, and we are proud to use our outstanding galleries to showcase such important international talent.”

State of the art

Night of the Long Knives: Working in performance, photography and video, Athi-Patra Ruga’s artistic approach combines myth and alternate reality with a sly undercurrent of humour. Ruga’s world is populated with characters whose identities are in a constant state of transformation. The central figure in Night of the Long Knives is drawn originally from his performance series The Future White Women of Azania. Engulfed in a cocoon of multi-coloured balloons, the character is in the midst of a racial and sexual metamorphosis, their identity suspended between black and white, male and female. Here, the body has become the site to explore questions about South Africa’s troubled history and present-day politics. Azania is a reference to pre-apartheid activists’ dreams of building an African utopia free of white colonial presence. In Ruga’s images, that goal remains very much in the realm of fantasy.

Just Like Us: For Eric Gyamfi, these photographs are part of an ever-evolving record of the lives of his queer friends in Ghana, whom he considers collaborators in the work. Same-sex sexual activity is illegal in Ghana and to counter prejudice against the country’s LGBT+ community, Gyamfi aims to create images that normalise their presence within society. Just Like Us seeks to represent queer people as both members of a distinct community and valuable contributors to the country’s social fabric and history. Although the project uses sexuality as a starting point, Gyamfi’s goal is to photograph queer people in the wholeness of their intersecting identities and interests. In the process, he seeks to expand the visual account of daily life for Ghana’s LGBT+ community which exists outside, yet also inside and alongside, heteronormative society.

The Last Journey of the Dictator Mussunda N’Zombo Before the Great Extinction (in Five Acts): Kiluanji Kia Henda’s series draws from a raft of literary and historical references to consider the European gaze on Africa and the myths and stories the continent tells about itself. In particular, it critiques two persistent narratives about Africa: the colonial-era notion of Africa as a land of “noble savagery”’ as perpetuated by Europeans such as Joseph Conrad and his 1899 novel, Heart of Darkness, and the idea of Africa as a verdant paradise as proclaimed by populist African politicians. The central character in the work is based on the dandyish persona of Mobutu Sese Seko, former president of the Democratic Republic of Congo (1965 – 1997), who styled himself as a father to his people while robbing the country of its wealth. His death in the final image is read as a cautionary lesson in the seduction of myths.

Main image: Night of the Long Knives by Athi-Patra Ruga (b. 1984, South Africa)