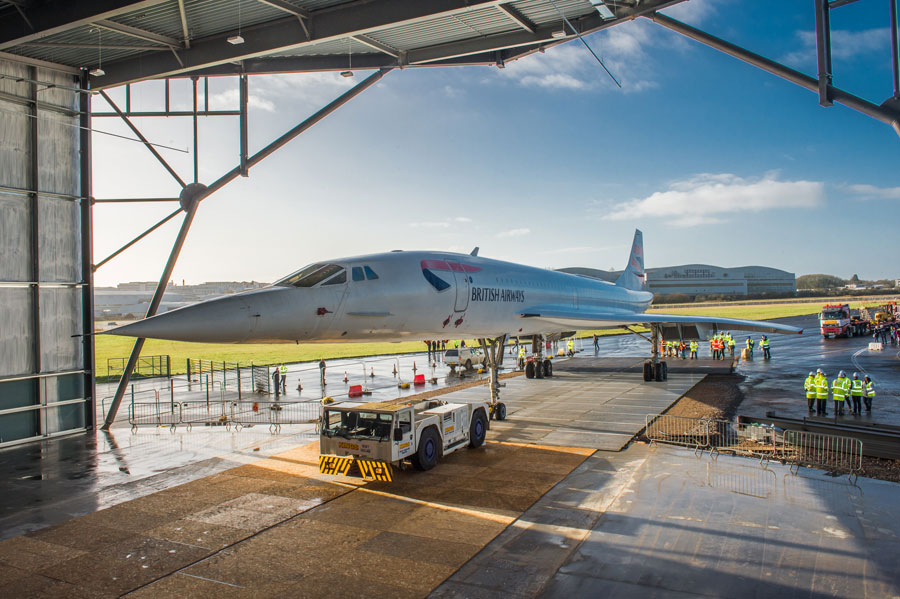 Flight of the Concorde: Aerospace Bristol

A £19million industrial heritage museum is soon to open in Bristol – telling the story of more than a century of aviation history in the West, through insight into the lives of the people and communities that have contributed to the industry

For many decades there has been an ambition to create a museum to recognise and celebrate the vast achievements of Bristol’s aviation industry and, over time, a heritage collection of Bristol-designed aerospace exhibits has been established.

The collection was given further impetus by the return of Concorde Alpha Foxtrot – the last Concorde to be built and the last to fly – when she landed for the final time at her birthplace of Filton in 2003. Since then, there have been plans to find a fitting home for Concorde at the place where the supersonic passenger jet was designed, built and tested.

Concorde returning to Filton Airport for the last time

Aerospace Bristol – developed by the Bristol Aero Collection Trust – will celebrate more than 100 years of aerospace design and engineering at Filton, and while Concorde Alpha Foxtrot will make for a showstopper of a centrepiece, there will be much more to enjoy. Starting in the earliest days of flight, when Bristol Boxkite biplanes flew over Clifton Suspension Bridge, Aerospace Bristol will take visitors on a journey through decades of fascinating history and tell the remarkable stories of the people who made it all happen and the communities that grew up around the industry. Visitors can learn about everything from the earliest pioneers of powered flight to the vital role Bristol played in the two world wars, exploring the drama and technological advances of the space race, hearing the stories of the designers and engineers who made Concorde a reality and – moving on to the modern day – discover the latest achievements of today’s aerospace engineers. An illustration of the Concorde over Filton by artist Sue Kelly

The museum aims to advance learning, skills and training, particularly in science, technology, engineering and design, and inspire the next generation of engineers while encouraging people to engage in the region’s world-class aerospace heritage. The exhibition will comprise a combined audio-visual show and object display – containing thousands of artefacts and Bristol-built aircraft including a replica Bristol Scout, replica Bristol Fighter, a Sea Harrier fighter jet and a Type 173 twin-rotor helicopter, as well as satellites, missiles and scaled models – that captures the passion and affection that the aircraft inspires. There’ll be tales of innovation and human endeavour, interactive exhibits that demonstrate the principles of flight, a static flight simulator and a virtual reality exhibit, and opportunities for formal and informal learning in partnership with local schools.

Where it all began

As an early cradle of UK aviation, aircraft production began at Filton in 1910 – less than two years after the first recorded flight of a powered aeroplane in British skies – with the British & Colonial Aeroplane Company. Over a century of succession, mergers and takeovers has seen the creation of the British Aircraft Corporation, Bristol Siddeley and British Aerospace, through to the well-known industry names of today such as BAE Systems, Rolls-Royce and Airbus, still at the forefront of the world’s aerospace industry.

The British & Colonial Aeroplane Company was the brainchild of Sir George White, entrepreneur and pioneer in electric trams. Two sheds were acquired at the top of Filton Hill, which became the first aeroplane factory in Britain to be run on a commercial footing. Within the first few months, the Boxkite biplane became a major success for the company, and steadily expanded over the next few years, until a large airfield was built in the early years of the First World War – when the company’s most famous product was the Bristol Fighter biplane, arguably the Spitfire of its day. British & Colonial was renamed the Bristol Aeroplane Company in 1920, and the factory continued to design and build a diverse range of aircraft during the interwar period ­– notably the Bulldog fighter in 1927.

The multi-role Bristol Blenheim of 1936 was a tremendous leap forward in aircraft technology, and became the backbone of the Royal Air Force early in the Second World War. The factory at Filton was the largest in Europe, and several shadow factories were set up around the country to support it. The Blenheim spawned several derivatives – the Beaufort bomber, the Beaufighter, the Buckingham, the Buckmaster and the Brigand. Early aircraft were predominantly designed with military activities in mind, but after the First World War, the company dabbled in civil conversions of existing models, including the Tourer, a Bristol Fighter that could carry one or two passengers, and the massive Pullman, a conversion of the Braemar triplane bomber that could carry 14 passengers in relative luxury. It wasn’t until the end of the Second World War that the focus switched to civil transport aircraft – the first new British aircraft post-war was Bristol product the Freighter. This rugged aircraft saw the company move towards commercial aircraft, while the huge Brabazon airliner of 1949 was another quantum leap in technology, providing invaluable knowledge that later went into the Britannia airliner, which became a worldwide success in the emerging holiday charter market of the 1960s. Meanwhile, also towards the end of the Second World War, The Bristol Aeroplane Company moved into helicopters, when Austrian-born Raoul Hafner joined the company. His pioneering research led to the Bristol Sycamore, the first British-designed helicopter. The prototype Sycamore – 180 of which were built at Filton and Weston-super-Mare – first flew in 1947, and was used by many military forces around the world for search and rescue, VIP transport and communications. In 1959, the company became a constituent of the British Aircraft Corporation pool of companies, which became a company in its own right in 1963. By this time, plans for a supersonic airliner were well underway and development began at Filton and Toulouse on the jointly designed and built BAC/Aerospatiale Concorde. Concorde made its first flight in 1969, and 10 years later, the last Concorde flew out. In nearly 70 years, over 22,000 aircraft were designed and built by Bristol in the UK or licensed for production abroad.

“Like many Bristolians, I have always been proud of Concorde and the achievements of all those that have worked, often their entire careers, in the aerospace industry,” – Iain Gray, chairman
of Aerospace Bristol

“Like many Bristolians, I have always been proud of Concorde and the achievements of all those that have worked, often their entire careers, in the aerospace industry,” said Iain Gray, chairman of Aerospace Bristol. “We will celebrate the innovation and endeavour of those generations who went before us but also look forward, to inspire the imagination of our young people through our learning programmes and encourage the school pupils of today to consider careers in our aviation industry. Creating a fitting new home for Concorde can only happen with the support of Concorde friends and admirers so we are asking everyone who remembers Concorde’s final flight, and shares our aim of keeping the spirit of Concorde alive, to please come on board by making a donation – any contribution will truly make a difference.”

Did you know about Bristol’s involvement in cosmic exploration? Space projects started in the Guided Weapons department of the Bristol Aeroplane Company in the early 1960s with Skylark, the high altitude sounding rocket, and the Anglo-American UK1 and UK2 university science satellites. In 1968, work began at Bristol on the design and manufacture of the structure for the UK’s Black Arrow technology satellite X3, which was launched as Prospero in 1971. It was and still is the only all UK satellite and launch vehicle combination.

Also in 1968 a prime contract was won by BAC Bristol from the Science Research Council for UK4. This was the first time that an industrial company had been awarded a spacecraft Prime Contract in the UK. In 1971 the Filton-built UK4 (also known as Ariel 4) spacecraft was successfully launched on the US West Coast.

Intelsat IV F-4 was built and erected in Bristol on behalf of the Comsat Corporation of the USA, and was the first to be launched into synchronous orbit over the Pacific Ocean – sending back live TV pictures of President Nixon’s visit to China in February 1972. Intelsat contracts led to dedicated space buildings at Filton and the construction of six complete satellites plus subsystems for eight more between 1971 and 1978. Later, on 14 March 1986, Filton’s GIOTTO intercepted Halley’s Comet, and survived – four years later it was steered to within 200km of Comet Grigg-Skjellerup.

The Filton site has also had a long association with road transport, from the earlier family businesses in electric trams, taxis and buses, to the car and bus body building in the early 1920s. At the end of the Second World War, Bristol Aeroplane Company took over Fraser Nash, and set up a car department in the factory. The first production car, the Bristol 400, was based on pre-war BMW designs, but with much higher performance, thanks to the manufacturing techniques of the aviation industry. The streamline 401 and the convertible 402 followed, with the company becoming world-famous for the quality of its luxury cars.

Bristol also developed a series of racing cars, the most famous being the Bristol 450, which took first, second and third place in both 1954 and 1955 Le Mans 24-hour races. Tragically, 94 spectators were killed when a Mercedes-Benz crashed during the 1955 race, and the Bristol team donated their prize money to the disaster fund. Later that year the racing department was closed down. Following the consolidation of the aircraft companies in 1959/60, the Bristol Car Division became an independent company. Shortly after, with the introduction of the 407, Chrysler V8 engines were used instead of Bristol engines. Then, in 1980, the company switched from numbered types to names, based on earlier Bristol aircraft. First was the Beaufighter, followed by the Britannia, Brigand, Blenheim and finally the two seat V10-powered Fighter sports car. The company went into administration in 2011, but was rescued by Frazer-Nash Group, and is currently developing a new car.

Aerospace Bristol has already welcomed a 1953 Bristol 403 saloon car home to Filton – discovered in a barn in the South West, where it had been stored for over 30 years and had fallen into disrepair. “The Bristol 403 was actually tested in The Bristol Aeroplane Company’s wind tunnel and its aviation heritage can be clearly seen in the aerodynamic body design,” explained Linda Coode, collections manager. “The bonnet, doors, fuel filler cap and boot all open from the inside, to remove the wind resistance that would be caused by external handles. It’s a fine example of high performance engineering to come out of Filton; we’re thrilled to feature it in the exhibition.”

The classic car was rescued by Bristol Owners Heritage Trust and restored to glory by volunteer apprentices from restoration experts Spencer Lane Jones. Now ready for public display, it has been delivered to the grade-II WWI hangar that will house the Aerospace Bristol exhibition when the museum opens.

Do you remember Concorde’s final flight over Bristol back in 2003? Have you sipped champagne while travelling faster than a bullet on the most glamorous airliner the world has ever seen? Have you seen the curvature of the Earth from 60,000 feet? As part of their appeal to support the new home of Concorde, Aerospace Bristol plan to start a digital archive and online map of Concorde memories – details to be published shortly on the website.

Aerospace Bristol is also appealing for donations to help bring a Type 170 Freighter ‘home’ to the UK from New Zealand – visit aerospacebristol.org to support its journey