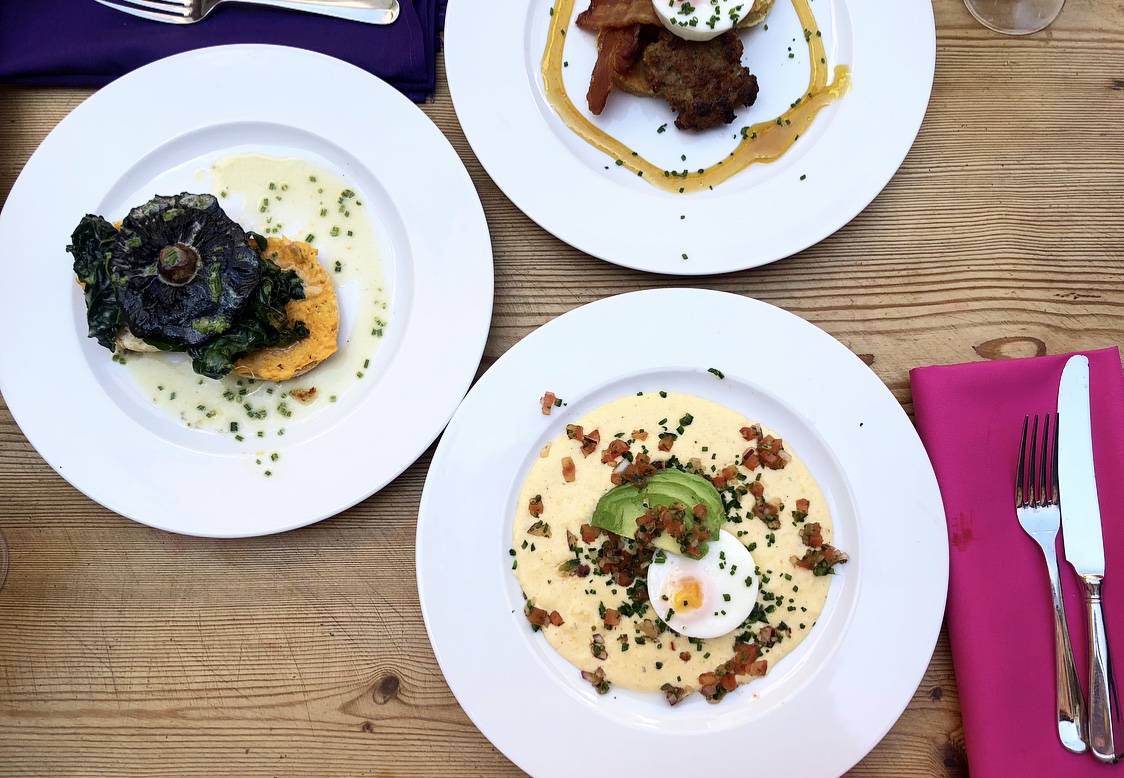 Seriously exciting stuff is on the way from Bristol chef Des Rogers and The Naughty Corner Deli, if the inaugural pop-up at Lantik Café is anything to go by

Seated in a cool corner of Lantik Café’s gorgeously tumbledown courtyard space on Lower Park Row – worn barrels for tables, tall walls washed in a warm shade of maize – on the scorching Saturday Des Rogers had alighted for his kitchen takeover, we shook off the week with a glass of red and relaxed into buoyant beats bouncing over from the decks to slickly soundtrack a Stateside-style brunch.

Heralding the Naughty newcomer’s arrival on the foodie scene, the set menu kicked off with spicy-sweet vegan canapés of oyster mushroom ‘fried chicken’ with American waffle, firing up the tastebuds with maple syrup, chives and hot sauce. It was like everything we’d eaten in Las Vegas. It was what dining partner J wished KFC would taste like, she confidently declared, denouncing the Colonel at first bite. To be sure, gently prised apart with a fork the crisply coated bite-size mushroom did a convincing job impersonating popcorn chicken, while bringing something balanced, new and entirely toothsome to the table.

A fat disc of French toast followed in the vegan vein, bearing a fruity trail of blueberry compote and a mild, just-sweet-enough coconut and vanilla cream. Despite a nearby toddler’s polite protest that ‘flowers don’t go on food’ we found the pansy-topped puff of pan-fried bread more than palatable.

Cornbread pancakes, all sweet, dense and lovely, came as a main for the carnivorously inclined, paired with smoked streaky bacon – “proper chewy American bacon; like what Gaga and Beyonce have in the video for Telephone” as J visualised it – baked eggs, bourbon maple syrup and sausage patty perfectly seasoned, like stuffing.

Meanwhile, back in the meatless camp, it was jalapeño and cheese grits all the way for the veggies, portobello mushroom and cavolo nero Benedict for the vegans; or both for bottomless-pit type diners among which we counted ourselves.

The grits – a kind of cornmeal porridge traditional in the Deep Southern states – were flavoursome with baked egg, salsa and avocado keeping them light, fresh and aesthetically appealing (not always easy). The base for the Benedict – served with vegan chive ‘Hollan-Dessy’ sauce, namesake of The Naughty Kitchen’s culinary king – was a butternut squash puree. It complemented its plate-fellows, providing a bright pop of colour and putting what felt like a more wholesome spin on the butter-heavy brunch favourite.

A trio of petit fours – French Madeleine, marmalade macaroon, and chocolate and Earl Grey éclair made by Bristol pastry chef Sherrazade (one half of Shez and Mez on 2021’s Bake Off: The Professionals) – were a delicious departure from the theme, and enough to finish us off completely. Stand-outs were the pastel orange macaroon, whose slight citrus tang managed to convert sceptic of the confection J (“the best I’ve ever had”), and the éclair. The tea flavour served to temper beautifully the chocolatey sweetness, and was also employed to intriguing effect in a vegan creme brûlée – a light lemon and Earl Grey gel replacing the customary crackable crown of caramelised sugar.

With thoughtful, adventurous, fun flavour combinations to rouse and excite even the most consistently spoiled-for-choice Bristolian palate, The Naughty Table made a deep (South) impact. As debuts go: dead impressive.