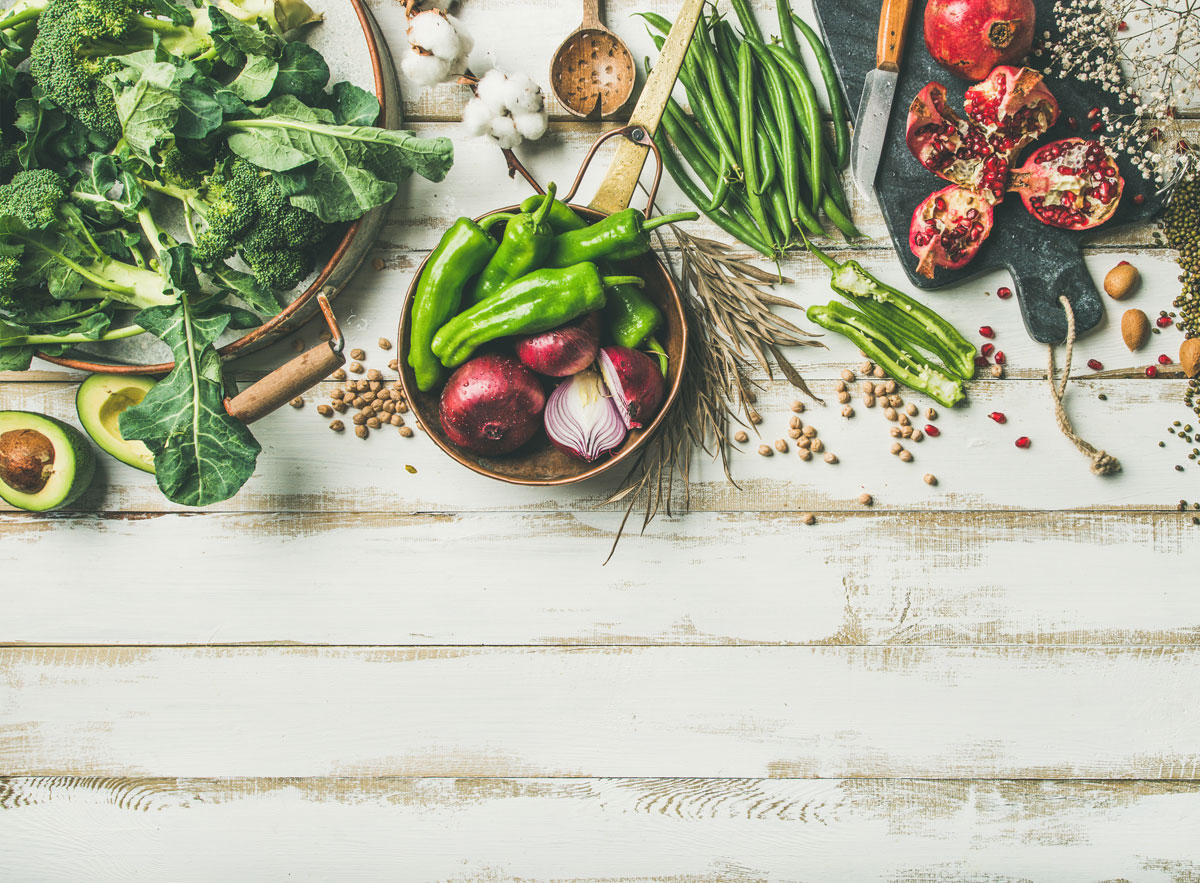 It’s a new year but is it time for a new diet? Melissa Blease investigates what will be hot and what will be dropped – from Veganuary to zero-proof drinks and flour alternatives, the future looks plant-based, sustainable and organic

What have poké bowls, posh crumpets and miso caramel got in common? They’re all – along with tacos, unicorn food, pét-nat wines, puffed rice and konjak (say whaaat?) just soooo last year. Wave goodbye to last year’s flash-in-the-pan food fads and say hello to six top food and drink trends that 2020 is poised to bring to the table.

Zero-proof – isn’t that just another way of saying alcohol-free? Well yes and no. Traditionally, alcohol-free alternatives to spirits have tended to attempt to mimic gin, tequila, vodka, etc, with varying degrees of success. Those of us who choose not to eat meat don’t need vegetarian or vegan alternatives to pretend to be meat. So in the same way, folk in search of a properly cool cocktail sans the hard stuff have sparked the rise of a whole new menu of chic alternatives using herbs, spices, shrubs, fruit, pickles and vegetables to create unique flavour sensations. Following in the wake of the huge success of Seedlip (who introduced us to the world’s first distilled non-alcoholic spirit in 2015), brands such as Stryyk, Borrago, Three Spirit, Atopia, ISH Spirits, Lyre’s and Caleño have totally shaken up the mixology market, replacing the old perception of alcohol-free alternatives being ‘what to drink when you’re not drinking’ with the hippest tipples for all to indulge in. Ironically at least three major gin producers are now attempting to create a traditional gin that tastes like a zero-proof gin created by one of the brands listed above.

Last year, we predicted that tahini would pretty much go everywhere peanut butter has already been – and in a way, we were proved right when stocks of Waitrose date and tahini cookies ran so low last spring that there was almost warfare in the aisles. But nut butters have far from melted into obscurity. While peanut, cashew and almond varieties still top the charts, nuts such as macadamia, walnut and almond are being buttered up in readiness for their turn in the hip foods limelight, alongside butters made from seeds including pumpkin, sesame, chia, poppy and hemp. As for palm oil as a nut butter lubricant – no, no, no! Argan oil – low in saturated fat and laden with vitamin E – is the new nut butter schmoo.

Sweetly seductive reductions made from familiar fruity friends (pomegranate, dates, coconut) will compete with attention-grabbing new sweeties on the block including syrups made with sweet potato, monk fruit and sorghum (a flowering plant with grass family roots, largely cultivated in warm climates around the globe), offering us new ways to shoo sugar entirely from both sweet and savoury dishes.

Plain and self-raising flours may be destined to be consigned to the dark, dusty corners of your larder in 2020 as almond, quinoa, plantain, amaranth, coconut and banana – just six of the flour alternatives that are set to trend this year – dominate the flour market. Banana flour – which has been used in Africa, South America and Jamaica for years – is the current market leader; like its fellow flour bed friends, it’s gluten-free… and perfect for pancakes.

Soy gets sent off

Soy has long enjoyed the spotlight at the epicentre of a plant-based diet. It does, however, bring a bit of controversy to the table. Even if we leave the is/isn’t it good/bad for you debate aside, it’s generally accepted that soy crops are the most destructive of all the monocrops, often pesticide-laden and almost always genetically modified. Little wonder, then, that innovative blends of grains and beans that mimic the creamy textures of yogurts and other dairy products are set to soar as soy sales sink. Meanwhile, those of us who can’t imagine life without soy sauce need worry not; soy-free incarnations are already widely available and taste exactly the same as the original version.

Scallop mortadella, salmon pastrami, swordfish salami, tuna ’nduja, lobster lomo: seacuterie will take over where the seafood platter sharing board leaves off. We’ll see sad smoked salmon, cheerless calamari and crestfallen crab pâté kicked to the kerb in favour of more complex, imaginative ways with fish and seafood, often involving processes such as dry-ageing, fermenting and salt-baking. Seacuterie is flashy, splashy and very, very hip; get ready to dive in.

Meat: off the menu for good?

Plant-based, vegan, meat-free, vegetarian, flexitarian: whichever label you choose to run with, the mass migration away from eating meat, which gained momentum throughout 2019, shows no signs of slowing down in the new year.

Cool campaigns
The Meat-Free Mondays campaign launched by Paul, Mary and Stella McCartney in 2009 will continue to gather pace in 2020, supported by celebrity endorsements from superstars including Woody Harrelson, Lauren Laverne, Richard Branson, Leona Lewis, Vivienne Westwood, Emma Thompson and Joanna Lumley. MFM aims to raise awareness of the detrimental environmental impact of animal agriculture and industrial fishing while encouraging people to help slow climate change, conserve precious natural resources and improve their health by having at least one plant-based day each week. Veganuary, however, goes one step further, asking us to give up all animal by-products for a whole month. Today, that commitment represents a far easier ‘ask’ then ever before, largely because of…

Market forces
UK food manufacturers launched more new vegan products than any other nation last year, making it the country’s fastest-growing commercial culinary trend of 2019 with a market worth of £310m. In a laudable effort to keep ahead of ­– or, in the case of some savvy entrepreneurs, dictate – the curve, supermarket chains will continue to stock more and more accessible, affordable vegan options and products in 2020. Meanwhile, the British Takeaway Campaign says that vegan meals are now the UK’s quickest growing fast food/takeaway choice, with meat-free orders rising almost fivefold over the last two years. The number of vegan restaurants on the online delivery platform Deliveroo increased by 168% in 2019, making it one of the company’s most burgeoning categories.

Guess who’s coming to dinner?
Even a mere decade or so ago, inviting a vegan/vegetarian friend to a restaurant get-together or to a domestic dinner party was seen as difficult. Those following such a diet considered themselves lucky if they
were confronted with the option of both vegetarian lasagne and mushroom risotto in a restaurant, while dinner party features in cookery magazines often included a sidebar paragraph headed “Help, I’ve got a vegetarian/vegan coming to dinner!” followed by a complicated recipe for cashew nut roast. But look at us now! Every restaurant in town flaunts multiple meat-free options, a vegan equivalent to pretty much every traditional ingredient (mincemeat, burgers, sausages, cheese, ham, butter… fish fingers!) is readily available, and endless recipe books and TV cookery shows make meat-free domestic menus a breeze, if not a joy. (Viewing figures for Jamie Oliver’s recent Channel 4 series Meat Free Meals, for example, surpassed his 2012 series 15-Minute Meals series by 38%.)

The naysayers
As meat continues to drop off the menu for millions of people, myths ranging from ‘vegans don’t get enough protein’ to ‘if cows aren’t milked they explode’ are peddled at every turn, largely fuelled by meat industry moguls quaking in their boots. Fortunately the myths section on the veganuary.com website debunks them all. Here is their answer to “Isn’t it natural to eat meat?”
What is ‘natural’? The chicken who cannot live more than six weeks, the turkey who can’t even breed without human help or the cow selectively bred to produce far more milk than is good for her health?
It’s all food for thought and it’s definitely the thinking about the impact of what we eat that is driving the food trends in 2020.

Previous
Noya brings flavours of the east to Harvey Nichols

Next
The Book of Mormon: Interview with the creators
Start typing to see results or hit ESC to close
bristol clubbing nightlife area 404 music venue
See all results