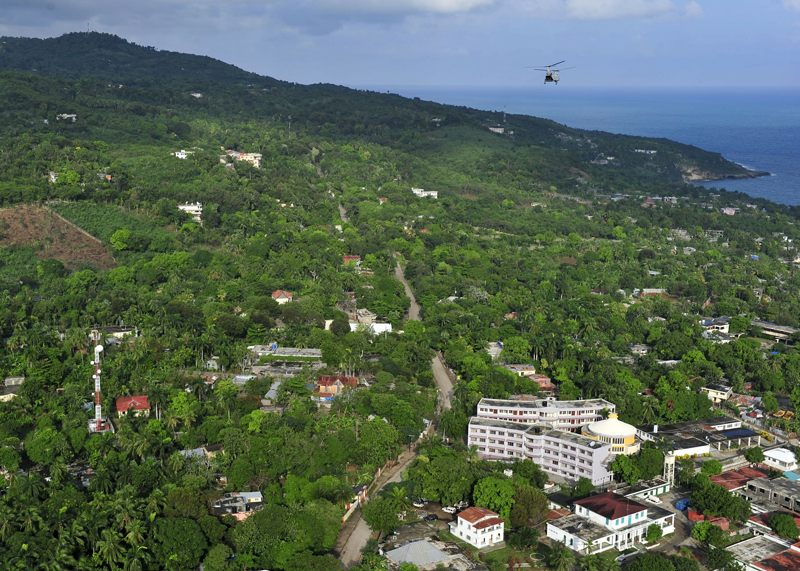 “From street copper to bouncer to bodyguard for the President of Haiti”, reads the front cover of Chris Nott’s memoir, Call Sign Chopper. Packed with relentless action, his debut book proves that Nott has unquestionably lived an extraordinary life. In it, he relives his experiences of his youth, growing up in Bath, working as a police officer and bouncer in Bristol and eventually a bodyguard in the Caribbean. His journey of tremendous courage is remembered with such vivid colour it is almost palpable. We caught up with Nott to discover more about his life, his work and how remembering the days of his youth was a cathartic experience during a year that forced the world to slow down.

From the outset, Nott speaks openly and candidly about his early years, his regular encounters with the police during his teens and his fascination with James Bond after its release in 1962. He sets the tone by explaining how, at the age of 15, his father left the family, leaving him to support his mother and younger brother. Nott left school at 16 and, in attempt to follow in Bond’s footsteps, picked up a job as a clerical assistant with the Ministry of Defence, hoping that “martinis and Aston Martins would soon follow”. Looking back on the experience, he now quips, “I thought I would be able to work myself up but, nah; you wish.”

Nott grew up in Bath and shares how, during his teens, he discovered “the wicked booze”. “I was going out on the town and enjoying myself a little too much,” he says. “A Bristol police officer who I dedicate the book to, Graham Cutting, once said ‘look Chris, some of the coppers are telling me about the antics you’re getting up to and you’ve got to start thinking about things.’” Nott soon left his job at the MOD and joined the police cadets in Bristol at the age of 17. As vividly described in Call Sign Chopper, giving civilians an insight into the magnitude of mental strength and resilience that must be acquired, he experienced the trials and tribulations of policing the streets as a frontline officer.

Suddenly, after 26 years of service, however, Nott was medically discharged from the force when a car accident left him with a broken neck. His career may have been cut short but his adrenaline-filled days were far from over. He became a bouncer at the forefront of the club scene in Bristol, where he shortly appeared in BBC documentary Muscle. “The series premiered in 1999 and exposed the drinking culture in city centres,” Nott recalls. “As a result of that, I worked around the country running training courses and working security. It was a stepping stone; I met some guys and next thing I knew I was out in California doing a training course. Two years go by, and then I get the phone call.”

“Are you ready to go to Haiti?” it said. The president had been subject to coup attempts and he was recruiting extra protection.

“And that was the start of it all,” says Nott, who committed to 18 months in the Caribbean and an experience that simply couldn’t be prepared for. “When I arrived in Haiti, it was sensory overload. I had never been to anywhere like that in my life before. They were the most exciting times of my life. You lived on adrenaline every day and you went to sleep to the sounds of voodoo drums, gunfire and screams in the night.” Call Sign Chopper grippingly details Nott’s experience in a severely impoverished country plagued by corruption, gang violence, drug trafficking, and organised crime. His descriptions of near-death experiences are tangible and he ensures the reader is standing by his side as he walks down memory lane, making for a heart-racing read.

The front cover of Call Sign Chopper is etched with Nott’s motto, ‘never let your memories become greater than your dreams’. “It became my mantra in 1996 and I still try to live my life by it today,” he says. “Because I’ve worked police and security all my life, as you get older, you’re supposed to get more mellow. Well, I was still working as security up until last year and I noticed my fuse was getting shorter so I had to find something else that would keep me motivated into my old age. I thought; let’s put this book together.” Nott explains that another deciding factor to finally publish his story was his children and grandchildren. “It would be nice to leave these stories as a legacy to them.”

Thinking back on his life – and there’s no hesitation from Nott – he wouldn’t change a thing. “I achieved my dream. In effect, I had a 007 number when I was in Haiti. Our briefing was to keep the president alive and in power, using whatever force we considered necessary. Effectively, I had a licence to kill. There’s nothing I would change. I’m 70 years old now, I’m still fit and strong and I consider myself to be a very lucky man. I stared death in the face and one thing I did learn is that when you’re under fire and when you think you’re going to die, you’re never more alive than in that moment.”

Call Sign Chopper is available to buy on Amazon and Waterstones; £9.99