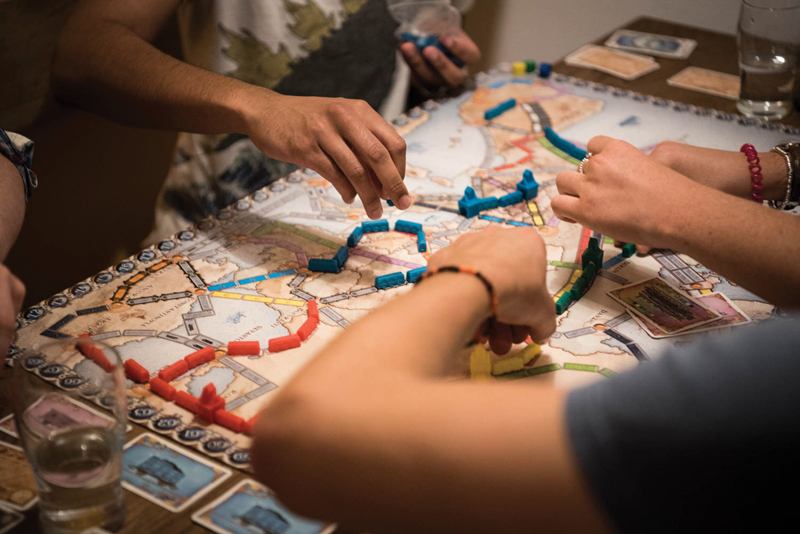 Bristol & the board game revolution

This Christmas, Britain looks set to still be at war with itself – but rather than Brexit we’re talking about the board games at fault for unfestive family friction, simultaneously bringing together and tearing apart. Malcolm Croft rolls the dice on why they remain so popular in the jolly season, and how Bristol is leading the charge in the board game revolution

Christmas is the time where the whole family – well, parents at least – can agree that the days and nights, up until New Year, are all about spending quality time together. That means unplugging from iPhones, iPads and laptops and bringing down board games from the loft and dusting them off. After all, for decades, playing board games with the family has been as much a tradition of Christmas Day as setting fire to a boozy Christmas pudding, falling asleep in front of the TV and drooling/duelling over the last roast potato.

Board games have historically always enjoyed a huge Christmas bump in sales. But recently the return to playing them has stretched further than just a holiday hobby. As 2020 rapidly approaches, it has been declared that we’re living in the Golden Age of Board Games, an era that has seen a wholesale return to ‘real things’, brought on by a large rejection of social media, a ‘disconnection’ from distracting technology, and a resurgence of traditional gameplaying.

“We have seen a real growth of interest over the past 10 years,” said Tony Hyams, director of UK Games Expo, earlier this year. “While the internet is a great thing, sitting down and playing with friends and family is becoming increasingly important. Having time away from our phones and computers, where we can talk, play and enjoy being together is something board games let us do. Board games are part of a trend – from books to vinyl, there is evidence of growing interest in the ‘real thing’ rather than the digital versions.” To prove this point, many of the biggest computer games in the past five years have all seen the launch of their own board game versions, including Tomb Raider, Horizon Zero Dawn, This War Of Mine and Fallout.

Before the advent of the internet, utterly addictive table-top family games such as Monopoly, Scrabble and Trivial Pursuit (to name the top three, in a list of thousands), ruled the roost and quickly became household names. As often quoted as the statistic is, it’s still true: more than half of all homes in the UK, and the US, own at least one copy of the ‘big three’ – that’s hundreds of millions of copies.

More recent numbers indicate the increasing – and surprising – popularity of board games. By 2023, and for the first time, the board game market will be worth more than £9 billion; sustaining a rate of growth of almost 10 per cent each year. Understanding why is easy when you consider the timing: there is the multiplicative effect of generational and family gaming (if your parents did it, you do it, so do your children); the rise of ‘geek culture’ alongside internet boom; social media (connecting people with shared interests); Kickstarter (funding new games and creators); Chinese manufacturing (keeping production cheap); 3D home printing (build your own game pieces); screen fatigue and game cafés, which grow gaming communities.

Dicky Duerden, head of games at popular board games café Chance & Counters (aptly located at the foot of the Christmas Steps) witnesses first-hand why, and how, board games remain not only one of the nation’s favourite holiday hobbies, but also a perennial pastime. “It’s a great way to spend time with family, and that’s never going to go out of fashion. And that’s especially true at Christmas. But, in recent years, playing board games has become a thing to do, with friends, out of the house. As such, board games, and their culture have had a huge boost in popularity over the last decade.”

Chance & Counters, founded by friends Steve Cownie, Luke Neal and Richard Scarsbrook, following a Kickstarter campaign, first opened in Bristol in May 2016 and has been growing confidently ever since. It is fully booked most weekends. “We started with 250 games, and now have a library of over 900,” says Dicky. “We’re now on the High Street in Cardiff too, where we have 500 games and opened in The Custard Factory in Birmingham in mid-November.”

The new old-fashioned way – to connect

What the Chance & Counters entrepreneurs have discovered is that ordinary people – not just archetypal ‘gamers’ – are keen to find new and interesting places to go to socialise and connect, other than just the pub. People want more from their days/night out, without having to pay a heavy cost. Naturally, dedicated board game cafés have begun to pop up all over the map, first in Toronto in 2010, then the US and now the UK, with scores of cafés now aiming to offer something different. Chance & Counters was the first dedicated board game café to open in Bristol, according to Dicky.

Cities like Bristol grow because they allow alternative innovators such as Chance & Counters the space and time to develop. “Bristol’s got a booming scene of designers and publishers, as well as a very knowledgeable city full of players and gamers,” continues Dicky. “Everyone seems to have a couple of friends or colleagues who play board games regularly; they have become this great reason to just get around a table and spend time together.”

Indeed, the South West is alive with board game development thanks to companies such as Alley Cat Games, Triple Ace Games, Auroch Digital, Ndemic Creations, Aardman and City of Games. “People like Frank West, Bevan Clatworthy, Robin Elliott are all really good designers and active in the community,” says Dicky. The concentration of gaming companies in Bristol is the seventh highest in the UK. At Chance & Counters, playtesting of new games, conceived and created by local designers, occurs every first Tuesday of the month. It’s a great place to showcase the local game talent and take advantage of the huge income to be made by creating a popular board game where mark-up is high and the cost is low. Think Cards Against Humanity – the recent word-of-mouth party game success that blew the doors to the game market, and what gamers wanted, wide open.

Naturally, Chance & Counters took a leap into board game publishing themselves recently, with their dedicated games arm Counters Out. “We teamed up with Triple Ace Games and Chaos Publishing to launch Exploriana on Kickstarter,” reveals Dicky. “A push-your-luck game about scientific discovery in the Victorian era, it was designed by one of our games gurus, Miles Ratcliffe, with the art created by one of our chefs, Richard Dearing. We smashed our funding goal, ending up 283 per cent funded!”

The continued success of Chance & Counters has allowed the three founding entrepreneurs to branch out and offer the best of what Bristol has to offer, including local beers, produce and themed events. The café recently hosted its first Dungeons & Dragons event is hosting various Christmas parties over the jolly season.

“The whole month of December is always a huge time for us at the café. We’ll also be running Christmas parties up and down the city, either taking a library of games to offices or running extravagant ‘you-dunnits’ for local businesses – large games for around 60 people to get all dressed up, with a sense of intrigue,” says Dicky. “We’re really excited about our new festive seasonal menu, created by Bib Gourmand-awarded chefs, so watch out for that too.” In this Golden Age of Board Games, the possibilities of the brand are endless.

Of course, playing family board games at Christmas almost inevitably leads to familial civil war and cheating around the dining table, with members battling it out among the detritus of Christmas dinner, discarded cracker jokes and paper hats, and novelty jumpers thrown on the floor after arguments became too heated. Recent research by Hasbro, the company that makes Monopoly, revealed that 61 per cent of game players are cheaters, and 83 per cent have seen a game turn ugly when a cheat was exposed. It also emerged that a Christmas Day board game lasts no longer than 53 minutes on average and is usually brought to an end by someone cheating. The same research also revealed that families are most likely to reach for a board game at 2.28pm on Christmas Day – once the presents have been opened, dinner has been served and everyone is too exhausted to do anything else. “I normally try and hit that sweet spot between presents and food,” says Dicky. Of course, the family in-fighting has become as much as a Christmas tradition as the games themselves.

“In our experience, the games that cause the fights are the ones that’ve always caused fights in the past,” says Dicky. “Everyone’s got a history with Monopoly, but that’s partly because the games go on for so long. Try and keep the games quick – not everyone in the family is up for sitting down for a four-hour epic after a huge meal. There’s an assumption that things will be different every time you play Monopoly, but my advice is to just to resist temptation and put the game back in the box and try something new! Most of our games at the café are over by the time you hit an hour, which means players don’t often have time to get into too much hoo-ha with each other.”

There are ways to stop the fighting before war breaks out – the best is to pick a strategy and stick to it. In order to win at Monopoly, for example, the best strategy is to buy orange – Vine Street, Bow Street and Marlborough Street. According to Natalie Fitzsimons, a 2015 UK Monopoly champion, “Statistically, you are most likely to land on these, so buy the set if you can. This is because they are close to Jail, and anyone who sets off from Jail is more likely to land on them.” For Scrabble, keep it short and sweet. Ditch the long words and stick to as many two and three-letter words as possible.

In search of a new go-to game?

For those families wanting to skew the family favourites in favour of something unfamiliar, Dicky has seen a few new games boom in popularity at the café. “There’s been a couple of really good new releases this year,” he says. “Head Hackers from Big Potato Games is a really good shout for families that know each other well – the game comes complete with a tinfoil hat! We’ve yet to find anyone who can pull it off as a ‘look’. My other recommendation would be Paranormal Detectives from Lucky Duck Games. It’s the weirdest game of the year. Players have to solve the puzzle of a murder, but by the strangest means possible. Everything from ghost quill, where your pen is possessed, to having the answer drawn on your back by a finger! Paranormal Detectives will definitely be getting a run-out at my home this Christmas but my own family favourite is Funemployed. It is kind of like Cards Against Humanity, but a bit more improvisation based on the silliest job interviews ever!”

Obviously, it’s the big-hitters such as Monopoly and Trivial Pursuit that get trotted out most at Christmas, when it is expected that approximately six out of 10 families will play a board game. “At the café, we find that families request games like Scrabble and Cluedo with their bookings this time of year because it’s a family tradition,” says Dicky. “It’s a bit like putting on an old jumper that feels 100 times comfier because of all the memories you made in it.”