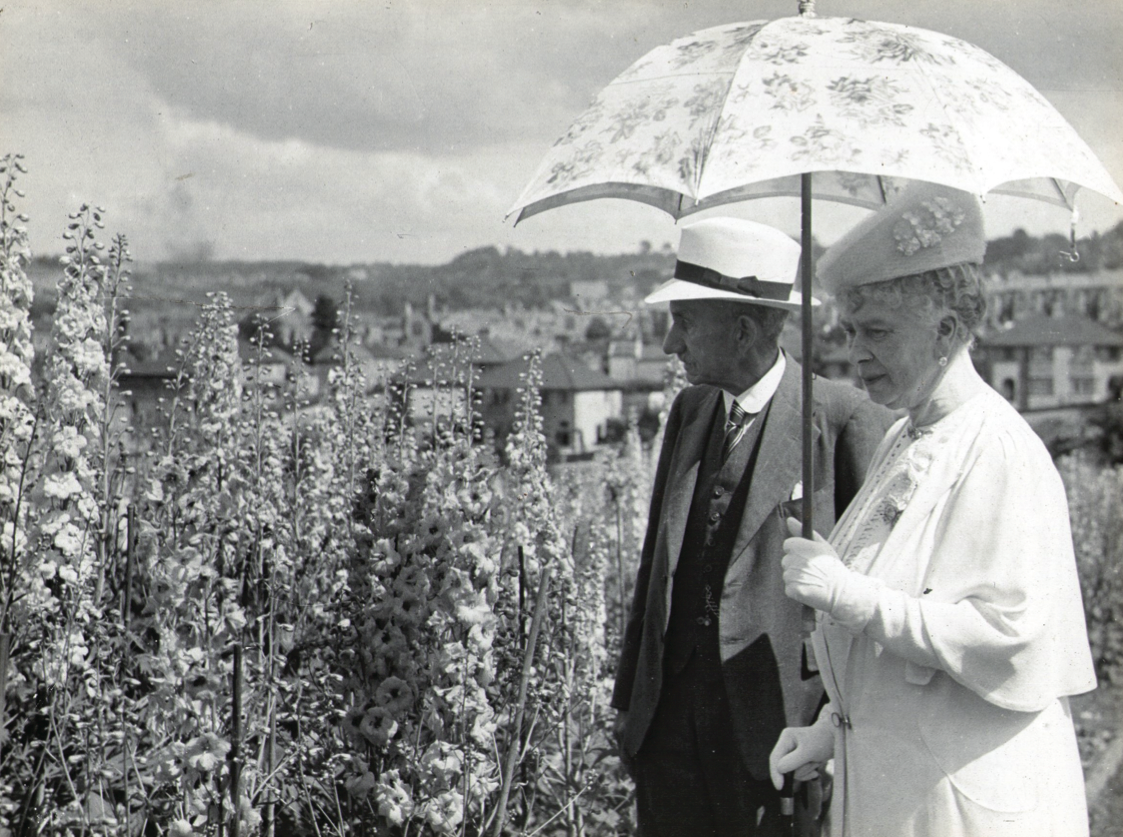 It’s hard to find two such unlikely bedfellows as the begonias and delphiniums at Blackmore & Langdon’s, says Elly West

Much of my work as a garden designer is about finding planting combinations that complement each other, looking at colour, form and texture. Sometimes it’s about creating harmony and at other times it’s about contrast. I like to mix things up as much as the next person, but it’s hard to find two such unlikely bedfellows as those grown at local nursery, Blackmore & Langdon’s.

Begonias and delphiniums are rarely seen together in a border, but these are the plants that four generations of nurserymen have lived and breathed since the family company began in 1901. And every year its stand at RHS Chelsea Flower Show combines the two, the begonias squatting at the front and the stately delphiniums towering behind them, continually impressing the judges with the high standard of the plants and winning the company more than 80 Chelsea gold medals since the first show in 1913.

Blackmore & Langdon’s, based in Pensford, is the only company in the world to have exhibited at every RHS Chelsea Flower Show since it began (and prior to this, at its predecessor, the Temple Show). And with Chelsea fast approaching at the end of the month, I visited them to find out what goes into preparing for such a big event.

Tucked away down a long track, the site covers 35 acres in total, although only the delphiniums make it to the outside fields while the begonias stay under glass. Very much a family affair, it’s now run by Simon, Nick and Steve – the great grandsons of Charles Langdon (pictured above with Queen Mary) who founded the company along with James Blackmore.

Charles and James met at the Bath Flower Show, both exhibiting prize begonias. James had been growing begonias in a greenhouse at the end of his garden, while Charles worked as a gardener at the Rectory in Newton St Loe, where his employer financed and encouraged his interest in breeding and growing both begonias and delphiniums. Their friendship became a business partnership and in 1901 Blackmore & Langdon’s was created.

Today much is done in the same way as it was over a century ago. Technology has allowed some processes to be automated, such as irrigation and the blinds controlling light in the greenhouse, but cuttings and plant crosses are all still done by hand. It’s a labour-intensive business. When I visited there were more than 50,000 delphiniums in production, plus about 20,000 begonia seedlings.

“Some things just have to be done carefully by hand,” says Simon Langdon. “There was no formal training. We were just brought up with it all around us and picked it up as we went along. We watched and learned.”
A big part of the business is hybridising and finding new varieties, as well as growing on and propagating new introductions from other sources such as the Begonia Society. But it’s a long and difficult process, hence the price tag of £15 to £30 for a single begonia tuber.

“We grow around 5,000 seedlings that are crosses in the hope to find something interesting,” Simon says. “From this we may get half a dozen that look good. Then we have to trial them for a few years to see how they develop, so may only end up with four decent plants. From a single plant we can’t take more than six cuttings each year, so it takes a long time to get the numbers up enough in order to sell that new variety.” He gives the example of creamy variety ‘Snowgoose’, which had very limited numbers when they first introduced it, and it sold out within 12 hours.

In bright and vibrant shades of pinks, reds, oranges and yellows, exotic looking begonias may not be everybody’s cup of tea, but they remain popular plants that sell to enthusiasts all over the world. Lots are shipped out for the Ballarat Begonia Festival in Australia each year, and White Flower Farm in Connecticut is another big customer. The tubers are cleaned in the autumn to remove all traces of soil and are subject to a DEFRA inspection before they can be issued a ‘plant passport’ to send abroad.

Simon is the first to admit delphiniums and begonias are a strange combination. “Begonias are big and blowsy,” he says, “while delphiniums are tall and elegant – the queens of the border. People tend to like one or the other. At the shows they share a space and it’s an odd mix as they are completely different.”

He recalls a visit from Highgrove’s head gardener Debs Goodenough to the nursery. “She didn’t even want to go in the begonia section of the greenhouse,” he laughs. “But then she ended up taking one away with her.” Perhaps it was a present for Prince Charles.

The company is currently royal warrant holder to HRH The Prince of Wales – a mark of recognition for businesses that have supplied a royal household with goods or services for at least five years. Other customers have included Claude Monet and Winston Churchill, and Charles Langdon was friends with Queen Mary (pictured).

Despite the stresses of relying on the weather and the enormous sense of responsibility that comes with keeping a family business going, Simon wouldn’t have it any other way. “It’s not a job you can walk away from,” he says. “But I love working in this environment, and we meet some wonderful people.”

Elly’s plant of the month: delphiniums
Sorry, but it’s delphiniums all the way for me. True blues are hard to find in the garden, but delphiniums offer that gorgeous, pure sky-blue, along with beautiful purples, pinks, mauves and whites. Favourites in traditional cottage gardens, they are unmistakable with their towering spires, usually placed towards the back of the border. Shorter varieties are available, but for those topping 1.5m or more, they will need staking if you’re not to lose the lot in a gust of wind. Delphiniums aren’t the easiest plants to grow and their flowering season is relatively brief, but for the month of glory they offer, they’re well worth the effort. These hungry plants will benefit from organic matter added to their planting hole, then some slow-release fertiliser sprinkled around them a couple of times during summer. And watch out for slugs! New delphinium plants are like caviar to these pesky molluscs. If you don’t want to use slug pellets, there are organic methods you can try, including physical barriers such as copper rings, grit and broken egg shells.

Although Blackmore & Langdon’s is a working nursery, it’s open to the public and plants are also available by mail order. The first weekend in May is the nursery’s ‘sale weekend’ when the Chelsea plants are available to preview and there are lots of offers and extra plants to buy. For more details visit blackmore-langdon.com or call 01275 332300.

Previous
Bristol: A hotbed of healthtech