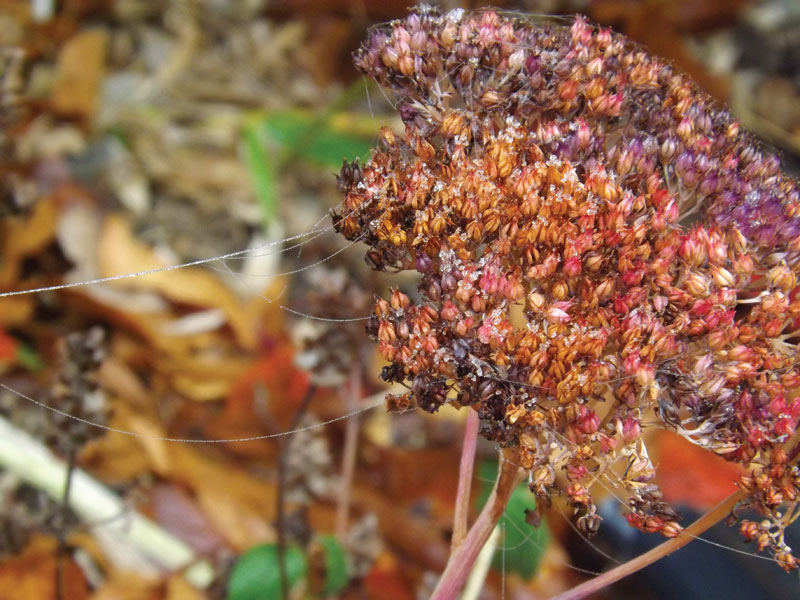 Gardening: brown is the new green

…So don’t go clearing everything away after flowering season, says Elly West

When I’m creating planting plans for clients’ borders, I’m nearly always asked for year-round colour and interest. That’s why I have a list of go-to plants – those solid performers that keep giving even when the growing season draws to a close. Those that flower for months, then put on a stunning winter display of seed heads, are worth their weight in gold. Until fairly recently, the trend was to clear borders when plants die back, leaving bare brown earth ready for a fresh start in spring. Think of the grand, double herbaceous borders typical of stately homes, with a team of gardeners to weed, mulch, stake and clear at the end of the season. But there is much beauty to be found in the dead and dying, and the trend today has moved towards leaving plants standing over winter, only clearing them in early spring when the new growth starts.

The Dutch garden designer Piet Oudolf pioneered this trend as a leading figure of the ‘new perennial’ movement. His approach utilises grasses and perennials, planted in blocks and chosen for their shape and form rather than flower colour. Texture is key, as is seasonal beauty. “The skeletons of the plants are for me as important as the flowers,” he says, and as such he chooses plants that have an ‘afterlife’, which in turn makes them better for overwintering insects and the ecosystem. You can see his work at the Hauser and Wirth garden in Bruton, Somerset, which is open all year round. He’s designed the planting scheme for the entire site, including Oudolf Field, a large perennial meadow with plenty of grasses that come into their own in autumn and winter, creating a landscape of swaying brown fronds.

If you’re planning a year-round garden, make sure at least 25 percent of your plants are looking good in each season so you have an even spread. Invariably, spring and summer will dominate as bulbs pop up, and fresh green leaves sprout in abundance, but when you’re choosing new plants, keep in mind what they will do in winter as well. Think about which way the sun shines, especially the low sunlight of the winter months, and try to position plants with interesting seed heads where they will be backlit to best effect. Coated in frost and sparkling in the sun, the effect can be magical, and is somehow all the more appreciated in winter when gardens can often look bleak and bare.

“…There is much beauty to be found in the dead and dying; and the trend has moved towards leaving plants standing over winter…”

I love using ornamental grasses in borders, mixed with perennials and shrubs, to add movement and also for their long season of interest. If you have the space, go tall, as the fronded plumes are more likely to catch the low winter light. Miscanthus sinensis has airy plumed seed heads from August right through until January or even longer, fading from gold to a silver-grey and reaching two metres or more in height. There are some attractive variegated and dwarf forms as well.

Clump-forming calamagrostis x acutiflora ‘Karl Foerster’ is another favourite that’s great as an informal hedge or screen, with its multitude of upright bronze flower stems reaching around a metre tall. A smaller grass that cries out to be touched is stipa tenuissima, or Mexican feather grass, which has particularly soft, feathery fronds. At around 60cm tall, it can be squeezed into just about any space or is happy in containers.

There are also plenty of flowering perennials that more than earn their keep after the blooms have faded. Honesty is more often grown for the seed heads than the flowers. While the blooms aren’t too noteworthy, the seed heads light up the winter border with their luminous, paper-thin, penny-like discs. Phlomis russeliana is another plant that I prefer after the flowers have died, the seed heads creating a distinctive tiered effect like balls on a stick.

Hydrangeas actually benefit from being left standing in winter. Leaving the large mop-head flowers protects the tender new buds from frosts as they form, so resist cutting them back until spring. The faded flower heads will sparkle in the sunlight when glazed with a winter frost.

Eryngium, or sea holly, has distinctive thistle-like seed heads that create a delicate, lacy network, while sedums are great all-rounders from late summer through the winter, when their flat panicles of flowers fade and crisp up into beautiful, dark brown seed heads.

Seed heads can also be cut and brought indoors to add to flower arrangements or to use on their own. A few stems in a vase make for a good seasonal display, or you can spray them gold or silver to add a touch of festivity.

This style of gardening, leaving plants standing, is a trend that suits low-maintenance gardeners, as well as those who want to do their bit for wildlife. Not only will your garden look good, but it will provide much needed food and shelter for birds and small mammals in the colder months. The more you leave, the greater the variety you’ll provide to cater for different creatures. Teasels act as a magnet for butterflies and bees in summer – and then their seed heads look great as well as being loved by goldfinches. Birds will prise out the seeds of many different plants, including sunflowers, honeysuckle, coneflowers and echinops, and beneficial insects and their larvae will find homes in old stems and seed heads.

So think twice before you pick up the secateurs, as you might just be depriving your garden of some winter wonder. Sometimes it’s good to be messy…

• Phlomis russeliana: The candelabra seed heads combine well with wispy grasses and stand tall and sturdy through the winter
• Hydrangea: Large flowers dry to form long-lasting pom-poms in shades of beige, bronze and cream
• Stipa tenuissima: One of the most tactile of grasses in my opinion, and compact enough for just about any garden
• Lunaria annua: Also known as honesty, the silver coin-like seed pods are great for indoor displays
• Sedum spectabile: When the flowers die, the seed heads continue to put on a display, especially when dusted with frost

Previous
Murmurations of Avalon: spectacle of the starlings