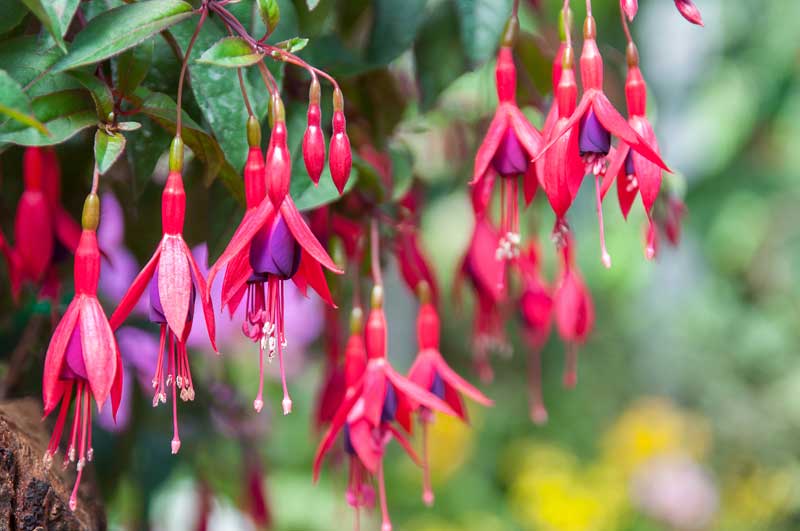 Usually associated with exuberant summer bedding schemes and hanging baskets, fuchsias can be slightly Marmite in their appeal. Big, blowsy and bright has a place in many, but not all, gardens. Modern breeders and showers have worked hard to create bigger and showier flowers, which perhaps hasn’t helped.

Although they are not necessarily the most cutting-edge choice in terms of fashion, I think they are long overdue a revival. Go back to some of the original species varieties and you’re more likely to find a hardy plant that can create backbone and structure in a modern border, along with attractive flowers for months on end, and what’s not to like about that? Case is proven by the fact they continue to sell well year after year in garden centres, so there must be good reason for their persistent popularity.

Like dahlias and even gladioli, which also fell out of favour but are now grown in the smartest gardens again, I firmly believe there’s a place for fuchsias in contemporary border schemes. If something has once been popular – the Victorians loved them – there’s usually a good reason why (in gardening terms anyway; there was no excuse for the mullet haircut).

Plants and gardens are subject to fashion just like anything to do with our home, and we can often date gardens by looking at the choice of hard landscaping materials or planting styles. Crazy paving was everywhere in the 1960s and ’70s, along with conifers and heathers, the latter of which are being seen again in increasing numbers at RHS Chelsea Flower Show and elsewhere. Fashion rules are made to be broken in my view, and I’ve always been an advocate of growing plants because you like them, rather than because someone has decided they are in vogue. So if fuchsias are not strictly on-trend right now, they may well be about to enjoy a resurgence in popularity; then you’ll be ahead of the game.

Despite the somewhat kitsch reputation, there are plenty of people who remain faithful to these classic flowers. The British Fuchsia Society was formed in 1938 and is still going strong. Fuchsia shows are held up and down the country year after year, and there are several Facebook pages dedicated to fuchsia enthusiasts.

The main thing that these blooms have in their favour is sheer flower power. They keep going right through the summer and up until the first frosts, providing much-needed colour into November and even December in mild areas. And although often associated with flouncy hanging baskets, with ballerina-skirt petals in vivid shades of crimson and purple, there are also plenty more varieties to choose from – some exuberant, others more sophisticated and calming in deep shades of burgundy, or palest pink and white.

They are also easy to grow and propagate. And who hasn’t enjoyed popping open the distinctive buds (or ‘dancing ladies’) when they were young, or not so young? The beautiful cascades of colour are well suited to containers and baskets; they can be trained as standards (with large mops of flowers on clear stems), used as hedging, or slotted into the border. There really is a fuchsia to suit every situation, from low-growing ground-cover types to larger shrubby plants several metres high. A drive through Cornwall in summer pays testament to this, where the crimson and mauve flowers of fuchsia magellanica are a common sight in hedgerows.

Hardy fuchsias – the varieties that will survive our British winters outdoors – mostly originate from mountainous South America, with a few species from New Zealand, which gives them their exotic look, but also their resilience. They appreciate sunshine and are happy in most soil types, particularly if it’s fairly free draining, as they don’t like cold, soggy winter roots. Those in the border will appreciate a mulch of extra compost or other organic matter in winter, to deepen the roots and ensure they come back with healthy vigour in spring. Once flowering is over and the leaves have fallen, in late autumn, it’s a good idea to cut plants back to about half their size to keep them compact and encourage a bushy shape.

Good plant partners are late-summer grasses and any silvery foliage, such as senecio or artemisia, which act as a fantastic foil for the ruby-toned fuchsia flowers.

John Lockyer, of Bristol-based Lockyer Fuchsias, is passionate about these plants and has been growing them all his life. The award-winning, family-run nursery in Coalpit Heath just outside Bristol, has been around for 60 years, and is a regular exhibitor at garden shows up and down the country. Chatting to him at RHS Malvern Spring Festival in May, he agreed that fuchsias can certainly hold their own with other more ‘contemporary’ plants in the right setting.

“I’ve seen a trend towards the darker varieties such as ‘Soila’ and ‘Blackie’, which always sell well at shows,” he said. “In the lighter colours, you have pure-white ‘Hawkes Head’ and the very pale-pink ‘Alba’. Slender, pale-pink ‘White Knight’s Pearl’ is also popular.

“I say it’s all about the right variety in the right place. There is a variety for every location, it’s just about getting the right one. One of the main merits is that they grow beautifully in shade or semi-shade, so will provide colour in darker areas of the garden.

“Contrary to popular belief,” he added, “fuchsias come in a wide range of colours. There is even a yellow form of the low-growing Fuchsia procumbens. It’s not all about mauve and red.”

The hardy varieties, of which there are more than 50 to choose from in the Lockyer’s catalogue, tend to have narrower and slightly less showy flowers, although there are plenty of blowsy varieties in this category too, such as ‘Garden News’ (one of John’s bestsellers) and ‘Delta Sarah’. 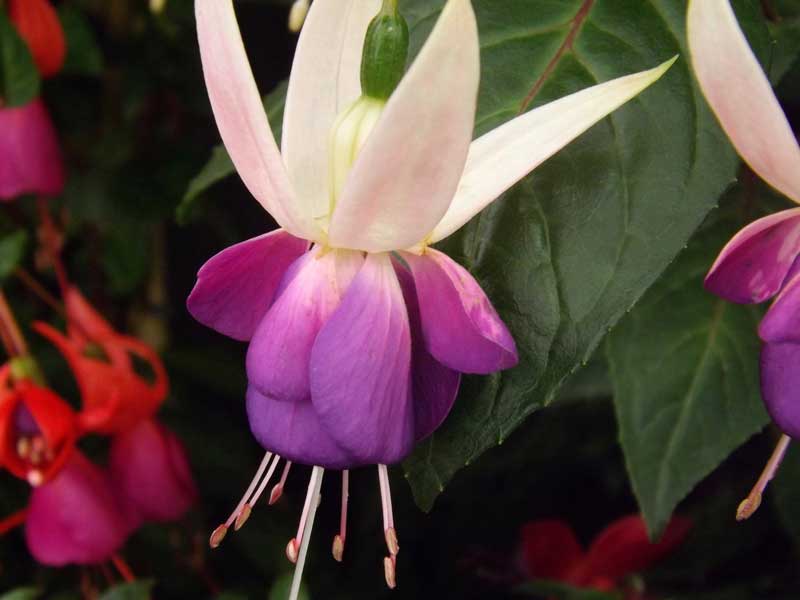 A FLOWER WITH STAYING POWER

Fuchsia ‘Delta Sarah’ is a fantastic example of a hardy fuchsia that can be grown in the border as a permanent feature alongside your other shrubs and perennials, where it will happily flower for months on end, year after year. It has unusual white and mauve-blue flowers that are semi-double in form, and will reach around 90cm in height and spread. Like other fuchsias, it is happy in shade or sun, although it will appreciate some shade during the hottest part of the day. And, like other hardy varieties, it should be happy outside all year round in all but the very coldest of winters. A thick layer of winter mulch will help see it through.

Previous
Art at the heart of education