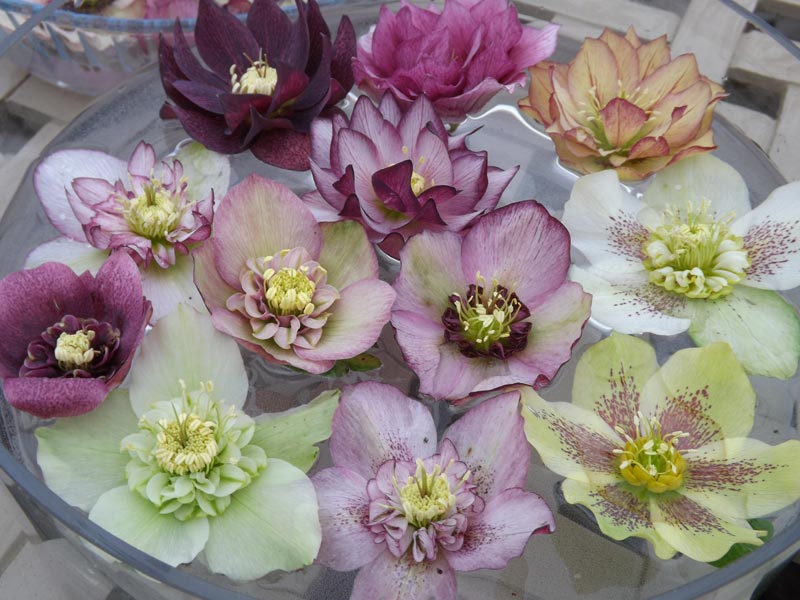 Elly West is a particular fan of the subtle yet promiscuous hellebore, signalling the onset of spring, in the early months

I have a hellebore in my garden that’s followed me from house to house over the past two decades. It’s one of those plants that I forget about for the majority of the year, when the garden is in full flow, but it’s the understated star of the border when it quietly does its thing during the colder months. Every year I remove old and tatty leaves to make way for the new growth, and it flowers away happily with literally no more than this in terms of care and maintenance. It’s a solid clump, but is in no danger of outgrowing its space. As I write this in early February, there are at least 10 fat buds sitting just above the soil surface, full of hope and promise, waiting to unfurl with beautiful freckled flowers followed by fresh, glossy leaves.

There’s something special about any plant that brings us colour and excitement in the early months of the year, and hellebores are one of my long-time favourite plants for their elegant dusky flowers in subtle greens, yellows, creams, and whites, through to every shade of pink and purple, the darkest plum and even black. The flower heads hang towards the soil, encouraging us to interact with them and lift them gently to see what lies within. Some are single, some are fully double, and others anemone centred, with smaller rows of frilly sepals around the stamens. And the patterns vary as much as the form, from a pure colour, to heavily veined or spotted, delicate with freckles, blotched, or with a picotee (darker) edge.

Despite their shy, demure appearance, hellebores are extremely promiscuous, which makes them very easy to propagate and raise from seed. Unless you deadhead your plants, they will cross pollinate and self-seed, and you’ll end up with new plants popping up in varying colours and forms with no effort on your part. Or if you have a variety or two that you really like, why not have a go at cross-pollination and create your own unique plants? A quick Google search on ‘how to breed hellebores’ and you’ll find clear, illustrated instructions on several websites, including gardenersworld.com. 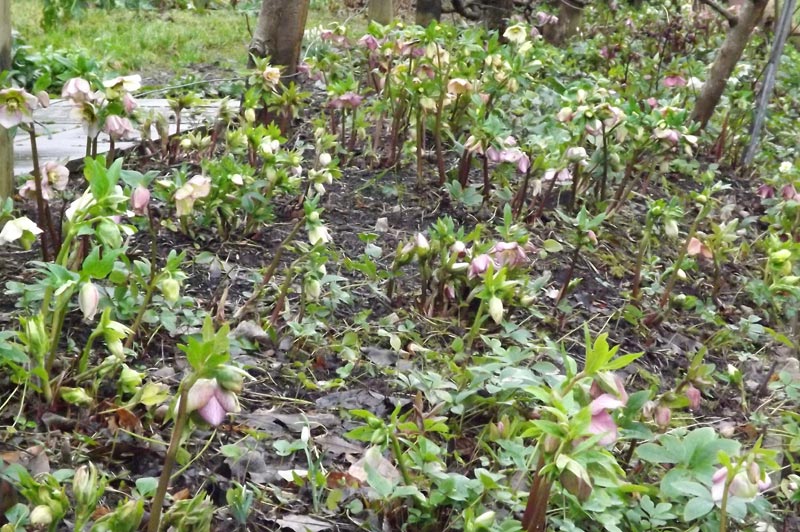 Hellebore enthusiasts, of which there are many, have been working hard in recent years to create new, improved forms, chosen for their appearance, and also for health and vigour. Alan Down, owner of Cleeve Nursery near Bristol, has a garden border full of hellebores, and sells 1,500 to 2,000 plants in an average year, many of which are bred and grown on site. Alan has called his own range the ‘Ciderhouse strain’, named after the farmhouse where he lives. This range has benefited from an influx of new colours, shapes and forms from a fellow grower inBelgium, with whom Alan has collaborated.

“Our plants tend to be heavily spotted with picotee blooms and lots of unusual yellow varieties,” he says. “The heads are also held slightly higher, so the flowers are easier to see.”

Although Alan also sells named varieties of hellebore, including evergreen types, the flowers in the Ciderhouse strain vary enormously. “We don’t give our varieties individual names as we propagate them all from seed and you can’t guarantee what you’re going to get. Sometimes it’s an exciting surprise,” he explains.

Alan, who holds the RHS’s highest qualification, the Master of Horticulture, has been at the nursery in Cleeve since 1983, and has been growing hellebores for nearly 20 years, along with around 700 other hardy plant varieties. But hellebores remain a personal favourite.

“They’re reliable,” he says. “Give them the right growing conditions and they’ll give you early colour and excitement. You lift their head and you might see something completely new. They’re good for shade, they suit the soil in this area, and nothing rivals them at this time of year for colour en masse. They give a hint of freshness, and signal that spring is not far away.”

At Cleeve Nursery they are grown for production in a lightly shaded polytunnel, open at each end to the elements, and given a special ‘compost tea’ – a kit imported from Holland made from finely composted plant prunings, mixed with a range of tasty treats such as brown sugar, kelp and fishmeal. Seed is harvested fresh as soon as the seedpods burst, and sown immediately outside so they are subject to normal temperature fluctuations. Seeds quickly go into a dormant phase if they are not sown immediately, and it can then be tricky to get them to grow. Germination is usually the following autumn or winter, with plants ready to sell around 18 months to two years later.

Hellebores are versatile plants, suited to modern cottage schemes, woodland gardens, naturalistic and informal plantings. They are the perfect partners for many spring bulbs and early flowering plants such as pulmonaria, muscari and anemones, and there’s nothing quite like the darkest black varieties among a sea of snowdrops. Woodland plants by nature, originally from Europe through into Asia, they grow well in humus-rich soil under deciduous trees and shrubs, and are happy in shade. The flowers last for months, fading gracefully as other plants take the limelight, leaving just the architectural, palmate leaves.

While many spring bulbs are gearing up for a much more flamboyant display, the subtlety of hellebores is something to cherish. It’s plants like these that encourage me to step outside during the colder months.

• Hellebores can be expensive, so it’s worth investing some time and effort in your soil preparation to give them the best possible start. They’re deep-rooted plants, so dig in plenty of well-rotted compost or leaf mould.
• Choose a sheltered site away from cold winds and preferably shaded in summer. A spot under deciduous shrubs and trees suits them well. They also like good drainage.
• Feed with a general purpose fertiliser early in the year when the flower buds are forming.
• Plants are prone to leaf spot, so remove old, tatty leaves in winter. This stops the tell-tale black marks spreading to the new leaves and also makes the flowers easier to see.
• Enjoy the flowers indoors by floating them in a bowl of water, where they will last for several days.

Featured image: Give them the right conditions and they’ll give back – nothing rivals hellebores at this time of year for colour en masse, says Alan Down.