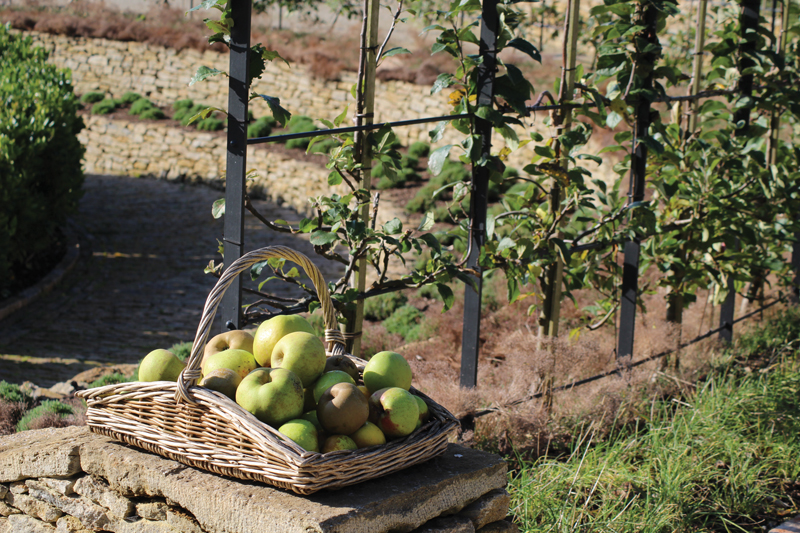 Created in one sitting, rather than having evolved, there’s a logic to the ordered, meaningful gardens at The Newt – where there are hundreds of apple varieties and the ambition is to have the best-trained fruit in the country. Elly West reports

I’ve visited many gardens over the years, but none quite like those recently created at The Newt in Somerset. With immaculate attention to detail and respect for the surrounding Somerset landscape at their heart, these beautiful gardens, designed by French architect Patrice Taravella, are a stunning example of what can be achieved with vision and no shortage of cash. This second point is worth emphasising as the investment here is nothing short of mind-blowing. From the beautiful farm buildings in the entrance courtyard, to the vast Victorian-style glasshouse, through acres of meadow planted from turf, miles of mature hedging, thousands of trees, walling, cascades, fountains and ponds, no expense has been spared. All the more impressively, it’s been built and planted in such a short space of time, after being bought by South African billionaire telecoms magnate Koos Bekker and his wife Karen Roos in 2013.

Or perhaps ‘recreated’ is more accurate, as there is a long tradition of fine, innovative gardening on the 800-acre estate. Formerly Hadspen House, built in the late 17th century, it has been home to seven generations of the Hobhouse family, most recently garden writer and designer Penelope Hobhouse. The gardens she created were the subject of her book The Country Gardener, published in 1976. During the 1990s it was redesigned by Canadian couple Nori and Sandra Pope and for them it was all about colour, with vast flower beds featured in their Colour by Design book and inspiring gardens the world over, including the borders in my parents’ garden, which run from one colour through to another.

Now renamed The Newt, the hotel in the main house opened at the end of August, along with a restaurant headed by former River Cottage chef Ben Bulger, and the gardens have been open to the public since the spring. In true Somerset tradition, this estate is all about apples. It’s also a working cyder farm (yes, that’s cyder with a ‘y’), and there are orchards with more than 3,000 trees stretching to the horizon. There’s a cyder press, cellar, farm shop and café to explore, with cyder tours run daily – and, of course, the 30-plus acres of formal gardens completely replanted and redesigned by Taravella over the last five years.

I like the fact there’s a logic to this garden. Created in one sitting, rather than having evolved, it feels ordered and has meaning. The main focus and masterpiece of the estate is the walled Parabola Garden, originally created in 1790, but totally restored and replanted with a maze of paths and apple trees. Although still in its infancy, with the trees due to take perhaps another 15 years to reach the tops of the pergolas, it’s a beautiful piece of architecture and design with low, honey-coloured, curving limestone walls laid out in baroque style.

The apple trees are organised and arranged according to their county of origin, and trained every which way – cordons, espaliers, step-overs, spiral supports twisting up, around orbs and over pergolas. There are waterfalls and secret areas to discover, quirky topiary and meandering paths, all with order and form. The ambition is to have the best-trained fruit in the country, if not further afield, and to gain National Collection status, with 267 apple varieties in the Parabola garden alone.

“If you throw an apple, the shape it makes through the air is the basis for the Parabola Garden,” says gardener Dean Parsons, who showed me around one sunny autumn day. “It’s all about gravity – swirls, spirals and orbs. And we are constantly manipulating gravity and the capilliary action in the trees as we train them. Weaker branches are tied upwards and the stronger branches are tied down to even out the growth.”

Swathes of green underplant the trees. “The planting is kept very simple to really showcase the apples,” says Dean. Plants that would have been found in a 17th-century garden have been used. Santolina, chives, rosemary and thyme feature heavily, planted in large blocks to create green carpets that spread below the apples and overhang the walls. Wall space is maximised both within the Parabola Garden and on the outer perimeter, where more fruit trees including medlars, cherries, figs and blackcurrants are carefully fan-trained at regular intervals.

Although these gardens are brand new in their current form, history is key, with each area carefully planned and designed with a period and style of gardening in mind, so it feels like a journey through the ages. The new Victorian-style glasshouse is filled with citrus, cacti, ferns, proteas, bird of paradise and other tropical delights, and is a tribute to the great plant hunters of the time. There is also a Victorian Garden, which had recently been cleared when I visited, but will contain seasonal bedding plants again in spring. The Colour Gardens pay homage to the Popes and Penelope Hobhouse, while the Cottage Garden, complete with 200-year-old thatched cottage is inspired by Gertrude Jekyll, with a diverse blend of flowers and plants celebrating the Arts and Crafts movement.

My favourite area was perhaps the Cascade Garden, modern in style, with water flowing from a huge lily pond down through rills and over falls to a spot where a giant toad and her babies lurk. Watch out for these fun sculptures though, or you could get wet legs if you stop too close to their mouths. “For me this is the happiest garden, as there are always shrieks of laughter to be heard from visitors here,” Dean laughs.

Beyond are swathes of grasses to extend the season, again in a modern style, and looking particularly beautiful in the October sunlight on the day of my visit. The grass beds lead to the vegetable gardens in one direction and, in another direction, an enormous cloud-pruned yew hedge, which was brought in on 17 artic lorries and planted in three weeks last autumn.

An original Victorian bathing pond remains, and five more ponds have been created to provide homes for the thousands of newts that give the estate its new name. Dean explains how they erected ‘newt fences’ during the construction of the gardens, so the newts would follow the fence lines and drop into buckets, from which they could then be added to the ponds. I also learnt that newts have four toes on their front legs and five on their back legs, a fact that’s in evidence on the various newt sculptures around the gardens, even if you don’t get close enough to a live amphibian to check.

• The Newt in Somerset, near Bruton, is open all year round with daily garden and cyder tours; thenewtinsomerset.com

Plant of the month: Apple tree
Every garden needs a tree of some description to add height, structure and a sense of permanence. An apple tree is a great choice, offering plenty of seasonal interest with blossom in spring, followed by fresh green leaves, plus edible fruits and autumn colour. Apples are usually grafted on to a rootstock that controls their eventual size, so they are particularly suitable for small gardens where space is an issue, and can even be grown in decent-sized containers. They are also easy to train into different forms such as espaliers, so can be grown flat against a wall. Any time from late autumn to early spring is a good time to plant an apple tree, available bare-root during the dormant season, or containerised all year round. Crab apple, Malus ‘Red Sentinel’, is one of my favourites for its clouds of white blossom in spring and heavy crop of shiny red fruits, while old favourite ‘Cox’s Orange Pippin’ remains top of my list of dessert varieties.