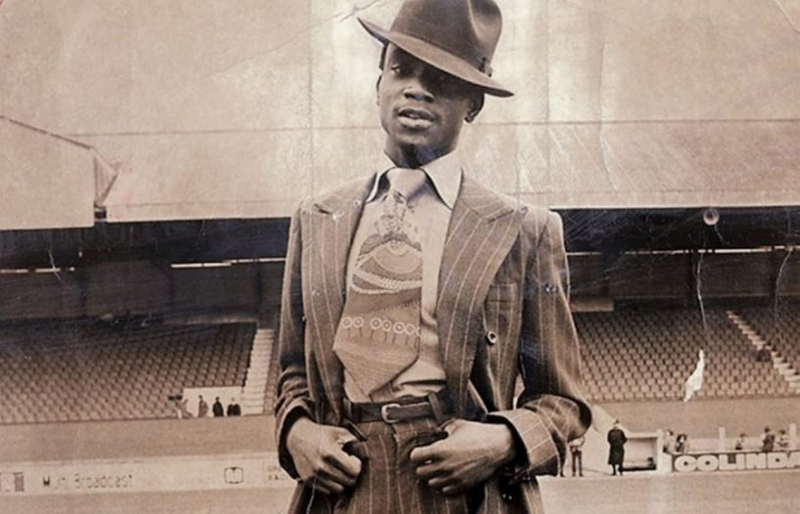 Getting the Third Degree: Interview with theatre’s Dougie Blaxland

Playwright Dougie Blaxland talks to Melissa Blease about his brand new play, Getting the Third Degree, at the Wardrobe Theatre in October

“He was, without doubt, the architect of cool. There was a touch of David Bowie about him because he kept reinventing himself every four or five months: there was the Gatsby look, the James Dean look, the funk look. He was one of the most stylish guys of the 1970s/1980s era – and if he was around today, he would have absolutely cruised Strictly Come Dancing…”

Cunningham came to prominence with West Bromwich Albion in the late 1970s before going on to become the first ever millionaire black footballer, the first black player to sign for the mighty Real Madrid… and the only footballer with enough swagger, style and super-slick flamboyance to make this distinctly football-phobic writer swoon despite the fact that I know FA (Cup?) about FIFA. But this is exactly why, perhaps, that Dougie – a former professional cricketer who has, to date, written almost 50 plays – has been the well-deserved recipient of several national awards for his work. His ability to paint a multi-sensory picture, with words alone, captures the imagination so strongly that… well, to give it a personal spin, he makes even football fascinating.

“Cunningham was, quite simply, stunningly brilliant,” says Dougie, his ‘audience’ now enraptured. “He had blistering pace, lithe athleticism and a unique elegance on the field. But it was his graciousness and panache off the field that really won people over; he was a true pioneer, and groundbreaking in more ways than one.”

Indeed, the backstory of the man that Dougie speaks of so eloquently goes far deeper than striking ball skills, chic clothes and cool charisma – which is why Getting the Third Degree was commissioned by Kick It Out, English football’s equality and inclusion organisation tackling racism and discrimination, to mark the campaign’s 25th anniversary and coincide with Black History Month UK 2019.

“When Cunningham started with West Bromwich Albion alongside Cyrille Regis and Brendon Batson in the late 1970s, they were dubbed The Three Degrees – a term they really hated – by their manager Ron Atkinson,” Dougie tells me. “They hit form and came to prominence in the winter of 1978/79: the winter of discontent. It was a time of huge political crisis with people fearing for their jobs, fearing for their future, fearing a huge economic crisis – sound familiar? The National Front seized the opportunity to stir up fermenting feelings of xenophobia and racism, and the black community were targeted. Cunningham, Regis and Batson were prey wherever they played: outside the ground, inside the ground, around their homes. To give the story further context, when Cunningham moved to Birmingham, the MP for Wolverhampton was Enoch Powell. Somebody set fire to his flat, incited by the National Front. Regis was sent a bullet through the post with a note saying, ‘This is what you’ll get if you accept selection for England’. That’s what they were up against. And Cunningham transcended it all.”

Tragically, Cunningham died in a car accident in Spain 30 years ago this year. “The anniversary of his death is another reason for telling his story today,” says Dougie. “And, 40 years ago this year, he made his debut for Real Madrid. He wasn’t just the first black player to play for Real Madrid – he was the first British player too. He was the one and the only player ever to get a standing ovation for RM at Camp Nou, Barcelona’s home ground. I wasn’t there to witness that moment, but I first saw him play in the early 1970s; the Will o’the Wisp black boy made Bobby Moore look like a cart horse. It was a breathtaking moment for me. I’d never seen football played like that, I’d never seen anybody move like that – he was more like a dancer than a footballer; he was extraordinary.”

Getting the Third Degree follows (fairly) swiftly on the heels of The Long Walk Back, which focused on the trials and tribulations of former England cricketer and international sporting superstar Chris Lewis who, in the 1990s, enjoyed a meteoric rise to fame and fortune before his life took a distinctly different downturn-direction. Prior to that, there was Dougie’s 2016 one-man play When the Eye Has Gone, about the life and death of test cricketer Colin Milburn. Is the sporting life backstory a recurring theme for Dougie, who, as we’ve already established, is himself a former professional cricketer? “I’ve used sport as a vehicle for storytelling, for sure, but overall I firmly believe that theatre is one of the most perfect places to wrestle with contemporary issues,” he says. “I’ve written plays that deal with mental health issues and prison issues; now this one is about racism – and sport is, again, just the vehicle for telling a fascinating and relevant story. Engaging with issues that are achingly relevant, and letting people go away and consider those issue for themselves – all Shane and I ever want to do is to have people come up to us three or four months later and say, ‘I’m still thinking about that play’; when that happens, it’s wonderful, it really is.”

The Shane of which Dougie speaks is RoughHouse Theatre director Shane Morgan, whom Dougie has collaborated with on many occasions and, alongside his wife and acclaimed movement director Moira Hunt, directs Getting the Third Degree. “Shane and I have a kind of shorthand understanding between us,” says Dougie. “I trust him totally – he’s my sounding board and a fantastic critic, and he’s got a wonderful mind. Shane can create what I visualise, on stage. He always adds something. On this occasion, he’s co-directing with Moira, who’s a very talented lady. This is a very physical piece, with lots of dance, lots of movement, and lots of the music of the time – the music that Cunningham loved, and danced to a lot!” Ah, talking of music…

Following the Bath performance of Getting the Third Degree at the Rondo Theatre (of which Dougie was a former long-term trustee, and today describes as “a brave, wonderful theatre that Bath is so lucky to have,”)   there’ll be a post-show Q&A with Shane and singer-songwriter, musician and music producer Midge Ure. “Midge is a strong and powerful anti-racism advocate with a lot of experience of his own to share – and of course, he’ll also have a lot to say about the music!” says Dougie. “He’s incredibly articulate and incredibly bright; we’re delighted to have him join us on stage.”

And Dougie, it seems, has more than qualities around articulation and brightness in common with Ure. Midge is a phonetic reversal of Jim, the diminutive form of James, which is Midge’s real name… and Dougie’s, too.

“I write under the name Dougie Blaxland because, many years ago, I was a headteacher, and I wanted to write about things that I wanted to write about without people saying, ‘Ooh, you shouldn’t be touching on that sort of thing’,” says the man christened James Martin Hilary Graham-Brown. “So I changed my rather posh, middle-class name using my grandfather’s surname – Blaxland – and my father-in-law’s first name, Dougie. It just sounded more gritty and ‘writerly’, really! So I lead a bit of a double life, in name terms. My agent and theatre-world folk all call me Dougie, but my wife and all my friends call me Jim. I turn around for both names if somebody I know stops me in the street.” Which name is he happiest with? “Oh, I’m never more happy and relaxed than when I’m writing, whichever name I’m called,” he says. “Of all the things I’ve ever been in my life – and I’ve had a fair few careers – I’m at my happiest right now.”

Keepie-uppie, Dougie; when it comes to contemporary theatre, you play a beautiful game.

Getting the Third Degree