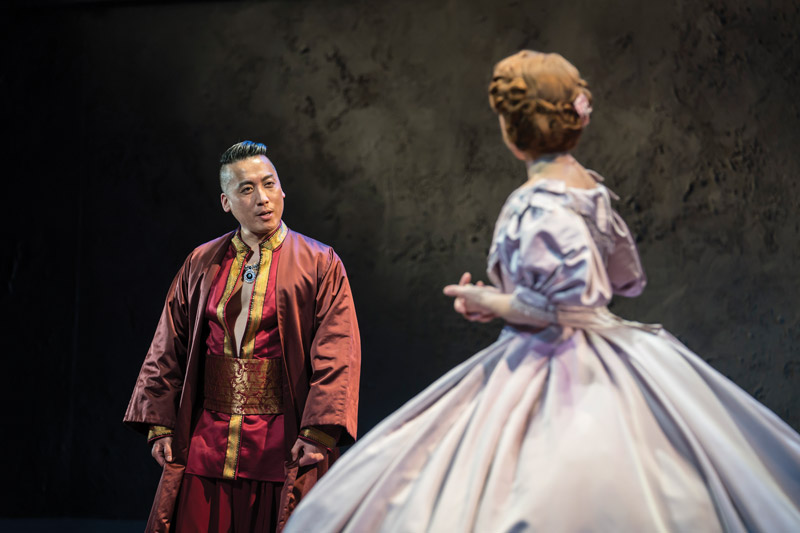 Getting to know… The King and I

How good is your knowledge of the Rodgers and Hammerstein classic? And what is its significance in today’s world? Words by Jasper Rees

A testament to the lavish heritage of gloriously romantic musical theatre, The King and I is considered by many the greatest musical from the genre’s golden age. Now, featuring a company of over 50 world-class performers, a full-scale orchestra, classic songs and extravagant costumes, a critically acclaimed, multiple Tony Award-winning version of the production is having its turn in Bristol this month.

How well do we all know The King and I? The story of a young English widow who takes a job teaching the children of the king of Siam is one of the ‘big five’ from Rodgers and Hammerstein. It has some happy tunes – not least I Whistle a Happy Tune, as well as Getting to Know You and Shall We Dance? Some may remember that Yul Brynner clung tenaciously to the title role rather like a real king refusing to let go of power. He died a few months after his 4,625th performance, 34 years after his first. Most have experienced the musical via the 1956 film.

But it’s in a theatre that The King and I really needs to be seen. A sumptuous spectacle directed by Bartlett Sher, the 2015 Lincoln Center Theater production, which has embarked on a UK tour following its sell-out season at the London Palladium, has four Tony Awards to its name and a full house of rave reviews: “I doubt I’ll see a better production in my lifetime,” said The Wall Street Journal; “Breathtaking. Exquisite. Remarkable,” said The New York Times, and “Too beautiful to miss! An astonishing achievement,” exclaimed New York Magazine.

Set in a glittering palace where everyone dresses in ravishing costumes, it’s the most visually splendid of Rodgers and Hammerstein musicals, and teems with a small army of the king’s children, wives and servants. But as Sher says, “It is essentially a very large-scale two-person show.”

…Yul Brynner clung to the role rather like a real king refusing to let go of power. He died a few months after his 4,625th performance, 34 years after his first…

The King and I has a long and intriguing pre-history. The real Anna Leonowens kept a diary of her time teaching the children of the king of Siam in the 1860s. It was published in 1870 and remains, as such, a fascinating snapshot of a hidden world emerging into the light. Three quarters of a century later, the novelist Margaret Landon fell on the journal as a rich source for a heavily fictionalised reimagination of her story entitled Anna and the King of Siam. That was instantly snapped up by the Hollywood producer Darryl F. Zanuck and was filmed with Rex Harrison.

It may seem an odd choice for Rodgers and Hammerstein. At that point they were known for ambitious, all-American stories. Oklahoma! (1943) and Carousel (1945) brought solace on the home front during the war. Their next success, South Pacific, focused on the American experience of conflict, based on the eye-witness stories of combatant James A. Michener. And yet what marked out South Pacific, and helped win it the Pulitzer Prize, was its liberal stance on race relations: the song You’ve Got To Be Carefully Taught explained that no-one is born a racist. The King and I featured no Americans, and yet it continued the project of closing the gap between different cultures.

…If a tale of ancient royal protocol, polygamy and slavery was a challenge to 1950s American values, it has a different task to perform now…

This is most apparent in the spectacular show-within-a-show in the second half. To impress visiting diplomats with Siam’s project to modernise, the king commands Anna to stage a version of Uncle Tom’s Cabin, the book by Harriet Beecher Stowe which, in the 1860s, was a very current commentary on slavery. It doubles as a wonderful opportunity for dazzling spectacle, courtesy of set designer Michael Yeargan, costume designer Catherine Zuber and choreographer Christopher Gattelli.

The director thinks of Rodgers and Hammerstein as “good liberals investigating these cultural issues. Hammerstein’s attraction to certain stories in which these kinds of transformations was very well keyed to pushing the entire form ahead.” Their politics didn’t extend to ethnically appropriate casting; the original cast had two Asian actors. This tour, like the London production and the New York incarnation before it, showcases the talent of young actors of Asian ethnicity.

If a tale of ancient royal protocol, polygamy and slavery was a challenge to American values in the 1950s, it has a different task to perform now, Sher argues. “Whenever we address a classic, we must address what is the immediate significance of the work right now. The question of education of women in the Third World, the position of women moving from a patrilineal society where power is maintained through marriage and he’s got millions of wives – and how a schoolteacher comes in and transforms that – it’s a complete reason to do the show. It’s what theatre does.”

There is a romantic subplot in The King and I, but what is richly unusual about it is that the main players act out a subtler and more deeply resonant story about east and west, men and women, tradition and modernity. It’s beautifully expressed in Shall We Dance?, the climactic duet between Anna and the king which is most memorable as the ecstatic meeting of minds, hearts and, most of all, feet. And that will always be timeless.

Next
Top flight: an afternoon with ‘Queen of the Palace’ Fallon Sherrock