The ghost signs of Bristol

Andrew Swift has been out hunting for signs of the city’s commercial history.

Those faded advertisements for long-forgotten businesses – otherwise known as ghost signs – are among the most potent reminders of a bygone age, and a surprising number can be found in Bristol. Some are easily spotted, but most are elusive, tucked away in back streets or so faded that only a few stray letters are legible. Yet they can be doorways into the city’s hidden past, and tracking them down and unlocking their secrets can be strangely addictive. If you’re prepared to take the risk, whet your appetite with these stories behind some of our most evocative signs.
On the corner of Whiteladies Road and Worrall Road, you’ll find a ghost sign dating from around 1884, when WM Appleton opened a cycle depot there. The sign not only advertised bicycles and tricycles, but also perambulators, washing machines and other, now illegible, items. However, at some stage, when it was repainted, the logo of the Cyclists’ Touring Club filled much of the lower part of the sign. William Appleton also opened a cycle depot in Weston Super Mare, which seems to have been more successful, for around 1892 he gave up the business on Whiteladies Road to concentrate his efforts there.

The sign for Easton Colliery is easy to miss, but provides one of the most tangible links with Bristol’s time as a coalmining centre. Easton Colliery opened in 1834, and eventually employed several hundred men. Accidents were a regular occurrence, and in 1886 an explosion claimed the lives of eight miners. It closed, after a prolonged strike, in 1911, and demolition started the following year. The office building on St Gabriel’s Road survives however, along with its sign.

One of Bristol’s most impressive ghost signs, on Cave Street off Portland Square, is currently covered by scaffolding. It is pictured here (below, right) before the building’s long overdue refurbishment began, advertising the business of Parsons & Co, Boot & Shoe Manufacturers, who were there between around 1876 and 1902.

Bristol brand Fry’s was established in 1761 and by 1822 was the largest commercial chocolate producer in Britain. In 1885, a trademark was registered for Fry’s Pure Concentrated Cocoa – it can be seen emblazoned on a wall at the end of Fraser Street, overlooking Victoria Park. 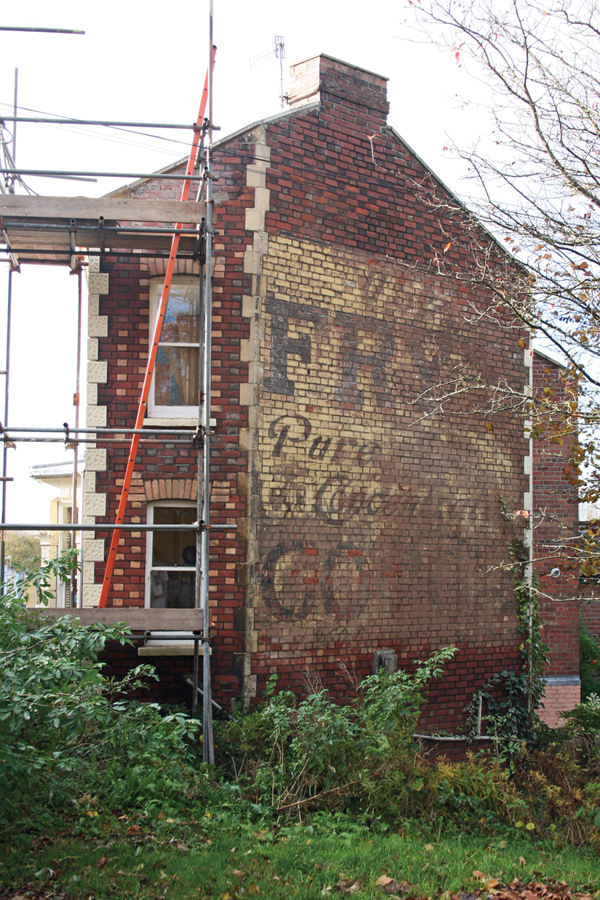 If you walk along Hanover Street – the alleyway south of the Hippodrome – and look up, you will see a 19th-century sign for a piano factory on the back of a building in Denmark Street, where Abraham Dimoline established his factory in 1840. The style of lettering is consistent with this date, making it one of the oldest signs in Bristol.

In 1912, a society ‘to care for the spiritual and social well-being of the deaf and dumb in Bristol’ opened an institute at 4 King Square. By the time it moved to newly-built premises across the square in 1962, the sign on its wall (our lead image, pictured left) had been repainted several times. Over half a century on, earlier versions of the sign have reappeared as later ones have faded, creating what ghost-sign aficionados refer to as a palimpsest.

George’s Brewery was absorbed into Courage’s in 1961, but reminders of it still linger if you know where to look. Its sign is on the back wall of a pub which is itself under threat, having been recently forced to close. The Three Crowns on Blackswarth Road in St George dates back to at least 1826, and was rebuilt in 1904, but closed in October amid widespread protests. So far over 1,100 people have signed a petition to save it, along with this reminder of Bristol’s brewing heritage.

3 Perry Road is ‘The Cheapest House in Bristol’ according to its ghost sign – the lower part of which has almost completely disappeared. A matching sign – on which ‘Builders supplied with …tres, …sses and …nrichments’ can be made out – has suffered a similar fate. They probably date from around 1890 when number three was occupied by the Cecchini Brothers from Tuscany, who made plaster mouldings or ‘enrichments’ for builders.

A shrapnel-scarred sign for J Bishop & Co’s Coal Office – an earlier sign visible beneath it – can be found in Temple Gate, on an archway of the original Temple Meads station. The company was founded by Frederick Bishop in 1894, folding two years later. When he appeared before the bankruptcy court in July 1897, it was revealed that he had started the business with virtually no capital, obtained coal on credit, sold it at a loss, spent the money, and then had liabilities of almost £1,400. While so many reputable, long-lasting businesses have disappeared without trace, the name of this one lives on.

A splendid palimpsest sign can be found on the side wall of 5 Victoria Parade in St George. The building was occupied by Albert West from around 1925 to 1937, which presumably accounts for the earlier sign for West Bros, Builders, Decorators and General Contractors. As for the later sign, the Victoria Cake Co Ltd moved into 3 Victoria Parade around 1927, expanded into number five when Albert West moved out, and commissioned a sign to cover up the old one. Today, both jostle for the attention of passers-by, providing graphic testimony of the building’s history.