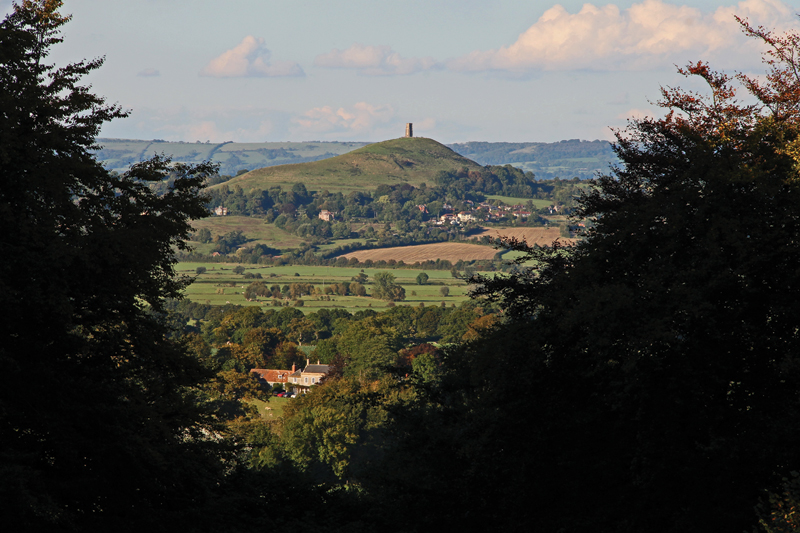 An area of great history and healing, myth and mysticism, where the tang of incense hangs in the air, this little Somerset town’s legends have left an indelible mark says Andrew Swift

Many places have half-forgotten legends connected with them – Bath, for example, with Bladud and his pigs; Goram and Vincent in the Avon Gorge. In a few places, though, far from being half forgotten, the legends have taken over, and nowhere more so than in Glastonbury. Perhaps that is because, instead of mythical beings, they involve real – if somewhat shadowy – historical figures.

There is nothing shadowy, however, about the impact they have had on this small Somerset town, where shop after shop sells rune stones, crystals, dragons and all manner of esoterica. The tang of incense hovers in the air. Paths to healing and enlightenment lurk at every corner. Long before you arrive, Glastonbury proclaims itself a place apart. The tor which rises 500 feet above the town is visible 20 miles away. Topped by the tower of a ruined church, it has an air of unreality. Two thousand years ago, when the surrounding levels routinely flooded, it would have looked even more unworldly. Then, the silver waters of a vast lake would have stretched to the horizon, and waves driven inland from the Bristol Channel would have lapped at the base of the tor.

That is how it would have looked when the first of those shadowy figures made landfall here. Legend has it that Joseph of Arimathea, who buried Jesus after his crucifixion, founded the first church in Britain here. Stepping onto dry land, he plunged his staff into the ground, where it took root and flowered. It is also said that he brought with him the chalice used at the Last Supper, which he hid in a well for safe keeping.

The tree which sprang from Joseph’s staff became celebrated as the Glastonbury Thorn which flowered twice a year, in spring and at Christmas, while around his tiny church grew up a great abbey.

In 1184, however, the abbey was destroyed by fire. Rebuilding work started straight away, but the scale of the project was huge – as was the cost. Because of the fire, pilgrim numbers had fallen sharply and the money was running out – at which point the monks claimed they had discovered the tomb of King Arthur and Queen Guinevere. As luck would have it, the cult of Arthur – largely invented by an imaginative historian called Geoffrey of Monmouth a few years earlier – was at its height.

Pilgrims and money flooded back in, the abbey arose more magnificent than before, and in 1278 Edward I attended a service marking Arthur and Guinevere’s reinterment. Over the next two and a half centuries the abbey grew ever more magnificent, ever more powerful. It all came to an horrific end in 1539, when Henry VIII dissolved the monasteries, and Richard Whiting, the last abbot, who refused to submit, was dragged on a hurdle to the top of the tor, there to be hanged, drawn and quartered.

The abbey was plundered for building stone and, although a few curious visitors came to see its ivy-cloaked ruins, the town fell quiet. Then, in 1750, Matthew Chancellor, who lived in a nearby village and had long been afflicted with asthma, was told, in a dream, that if he drank from a chalybeate spring in Glastonbury he would be cured. He followed the advice, his asthma disappeared and, as word spread, people followed his example. By the following May, there were over 10,000 visitors in town, many claiming miraculous cures, and a pump room was built to accommodate them. 40 years later, long after the craze had run its course, the Rev Collinson, in his History of Somerset, declared that “the whole story had been designedly trumped up with a view of bringing custom to the town, which had strangely dwindled since the demolition of its abbey”.

But, although the craze had passed, belief in the healing properties of the waters held firm. By now, the old legends, which had never really gone away, were starting to reassert themselves, and to be joined by a host of new ones. The iron-rich waters which had drawn so many to the town stained red the channels through which they flowed. This tied in neatly in with the legend of the hidden chalice, so it was natural that the well from which they flowed became known as Chalice or Blood Well.

By the late 19th century, Glastonbury was gaining a reputation as a place of myth and mysticism, and attracting increasing numbers of latter-day pilgrims. One of the unlikeliest was a prominent Bristol architect called Frederick Bligh Bond, who had worked on Clifton College and the University of Bristol. In 1908, the Church of England appointed him director of excavations at Glastonbury Abbey. At first all went well, until in 1919 he revealed that his investigations had been directed by spirit guides. Dismissed from his post, he became editor of the magazine Psychic Science, before becoming education secretary of the American Society for Psychical Research. By this time, such esoteric beliefs were in full spate. In 1927, an artist called Katharine Maltwood discovered a map of the constellations formed by landscape features around the town. She claimed that it had been laid out by Sumerians around 2700 BC. Landscape archaeologists have dismissed it as having no basis in reality, pointing out that many of the ‘prehistoric’ features had been created comparatively recently. Nevertheless, the ‘Glastonbury Zodiac’ has proved one of the most potent and popular of the newly discovered legends.

Whatever your view of these myths, ancient and modern, they have left an indelible mark on this small Somerset town and on many of those who have come as pilgrims over the centuries. It is a place where legends somehow become tangible.

Visiting the abbey, for example, where jackdaws croak on crumbling walls, you can see the spot where Arthur’s tomb was found. Scions of trees descended from the thorn that sprang from Joseph’s staff can still be seen in bloom. And walking out of town, past the pump house built to accommodate those teeming hordes who came in search of healing, you can drink from the spring at Chalice Well, and spend time in the gardens laid out around it as a ‘living sanctuary’. From there, you can climb the tor to look out across the levels to the western horizon.

Glastonbury is, as it always was, a place apart; a place which, for whatever reason, has always seemed that bit special.

Featured image: The ancient tor as seen from the west: it has an air of unreality and unworldliness