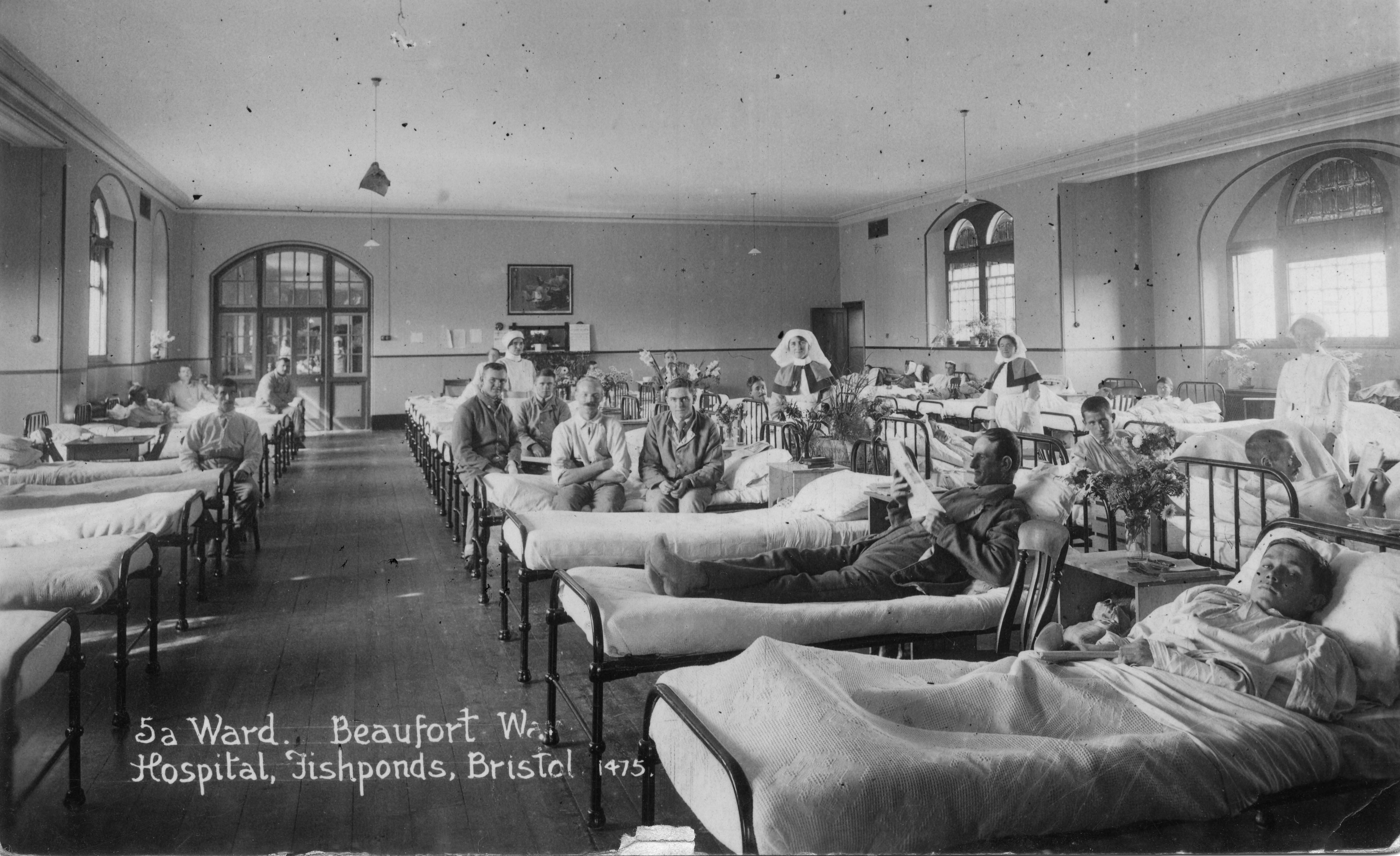 All Change on the Home Front: Glenside Hospital Museum

While war raged overseas in Europe, by 1915 hospitals in Britain were quickly becoming overcrowded with the sheer number of wounded soldiers being transferred from across the English Channel. In a desperate attempt to create more facilities and beds for soldiers, the War Office took over Bristol Lunatic Asylum and developed it into a war hospital in order to deal with the increasing demand for orthopaedic treatments.

After agreeing to change the asylum’s name for the duration of the war, the newly titled Beaufort War Hospital (named after the Duke of Beaufort) expanded the building’s facilities on an enormous scale. The number of beds increased from 520 to 1,640 – including beds that were even added to the corridors as the hospital came under pressure to treat the growing numbers of patients. The day rooms and night wards of the asylum were transformed into medical and surgical wards, while corrugated iron and patent plaster were used to make temporary operating theatres. The wounded arrived in Bristol by train, with many soldiers making the journey in the middle of night so that members of the public did not witness the extent of the injuries they had suffered while fighting abroad. As the soldiers arrived in their hundreds, they were greeted by volunteers and members of the Red Cross.

“the red and white of the sisters and the dark blue and silver of the ambulance men, looked picturesque, spectacular – like a theatre scene…”

One letter by Bernard Joseph McDermott of the Royal Engineers recalled how surprisingly uplifting his arrival into Bristol Temple Meads was, after such a long journey from the trenches: “We arrived at Bristol Station about 2am on Whit Monday; a sore, tired lot, after many weary hours on train and boat. We thought we were going to London, but many of us seemed so fed up that we didn’t care much where we were going. We certainly didn’t expect any fuss to be made of us at that hour of the morning, so you can imagine our glad surprise to see a bright array of Red Cross sisters and smart-looking Ambulance Corps. The cheery, animated scene, with the red and white of the sisters and the dark blue and silver of the ambulance men, looked picturesque, spectacular – like a theatre scene. “Before you could wink twice, we were putting ourselves outside of tea and cake to our heart’s content. While some served the good things, others gave us postcards – wrote them for us and arranged to post them for us – and one dear, thoughtful, motherly lady gave us luxury of luxuries – a nice pocket handkerchief each. And then there were the cigarettes. The splendid handling of the large number of stretcher cases was a sight good to see.” (Published in the Western Daily Press, 28 May 1915.)

As the wounded arrived at the Beaufort, they were cleaned, their often dirty, lice-ridden clothing was removed, and they were given clean, brightly coloured blue flannel uniforms with red ties (known at the time as convalescent blues) to wear before being assigned to a particular ward. While the photos available from this time are in black and white, you can imagine how bright and colourful the scenes around the hospital must have been with these uniforms. Trips to Bristol Hippodrome, Bristol Zoo and the countryside were regularly organised to keep morale high

It wasn’t just British soldiers who were treated at the Beaufort. Large numbers of Canadian and Australian troops were admitted and 10 beds were allocated for German prisoners of war from labour camps on the outer area of Bristol who had fallen sick in 1917. Thirty beds were also created for local soldiers requiring mental health treatment.

In order to keep morale up, the hospital organised plenty of entertainment to ensure patients were occupied during their stay. The Beaufort planned visits to Bristol Zoo, trips to the countryside, and football and cricket matches, plus the patients enjoyed theatre performances every Thursday afternoon from the stars from The Hippodrome. They would pile into the theatre, with some even being wheeled in, in their beds, to enjoy the show. The staff and soldiers also put on their own concerts, and Sergeant Major Kench (who was the head male nurse of the asylum before the outbreak of war) was a frequent performer and a popular entertainer among the troops.

While a number of the male workers at the asylum joined up to the armed services, the female staff became auxiliary nurses. By 1916, the hospital’s number of nursing staff had been cut significantly as so many women were drafted overseas, so members of the Voluntary Aid Detachment were brought to the Beaufort to help with the wounded.

From 1915 to 1918 29,434 patients were admitted to the hospital, with 164 deaths being recorded (30 were civilian casualties from the Spanish flu epidemic in 1918) – a toll that seems remarkably low for such a high figure of severely injured men coming through the door. One key factor for the smaller number of fatalities could be owed to the introduction of the Thomas splint to the hospital by orthopaedic surgeon Sir Robert Jones. Records show that by using the splint to support patients with fractures, this reduced the death rate for these kinds of injuries from 80% to just 8% – an extraordinary drop for such a simple piece of equipment, and Glenside Hospital Museum currently has one of these splints on display to the public.

And what of the patients who were originally in the hospital before the war broke out? As the wounded began to be transferred to the hospital in 1915, the occupants of the asylum were moved from Bristol to other asylums in the South West of England, including those in Wells and Taunton, while 45 male patients were kept onsite to work around the hospital and the grounds.

After the war ended in November 1918, the soldiers that were still recovering were moved on to other hospitals closer to home, whereas the asylum patients that had been taken to other institutions returned to the Bristol asylum throughout the months following the armistice. The asylum eventually began to return to how it was before the outbreak of the war, employing most of the original staff and admitting its first new patient on 18 December 1919.

Glenside Hospital Museum is open from 10am to 12.30pm on Wednesdays and Saturdays, and group appointments are available to view the collection at other times of the week. Visit: The Chapel in UWE Glenside Campus, Blackberry Hill, Stapleton, Bristol, BS16 1DD.