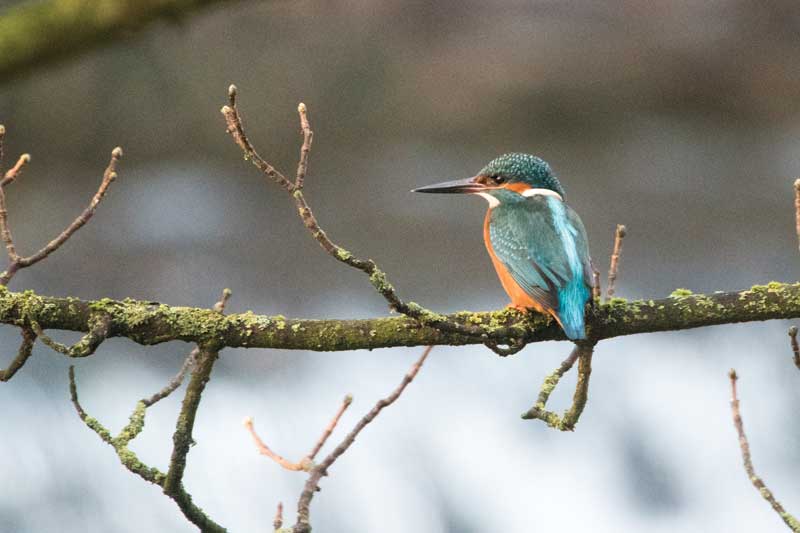 Kingfishers are kept busy on Bristol’s rivers during September but they’re not always easy to observe, says Pete Dommett

Every birdwatcher has a bogey bird: a species that, for some reason and despite their best efforts, has somehow managed to elude them. Until recently, mine was the kingfisher. You’d think it’d be simple to see Britain’s most brightly-coloured bird, wouldn’t you? And, in some ways, it is – I had seen them many times, but only ever for the briefest of moments. Getting a good, long, lingering look at this feathered jewel can be decidedly more difficult.

Kingfishers are usually doing one of two things. They’re either sitting very still on a branch above the water, where that aquamarine and burnt orange plumage blends in remarkably well against a riverbank backdrop and makes them easy to miss, or they’re flying low and fast across its surface like a neon tracer bullet, so that often all you’re offered is a frustratingly fleeting glimpse.

To watch a kingfisher, head to Eastville Park. Go early in the morning if you can, before the joggers and the dog-walkers are out in abundance, and listen for the distinctive, shrill, peeping call that confirms there’s one about. Look around the lake, especially the leafy fringes of the little islands, for a tiny pixel of electric blue (they’re surprisingly small birds – barely bigger than a sparrow). Or take a slow stroll up the River Frome, scanning ahead and checking low, overhanging boughs for the same – kingfishers, especially inexperienced juveniles, may spend lengthy spells hunting from the same perch. If you do spot one, creep up quietly for a really close-up encounter.

Alternatively, wait for them to come to you. I was finally granted a more leisurely audience with a kingfisher at Colston Weir in September of last year. As I paused there for a while on a walk along the river, a bird suddenly appeared from nowhere to land on the top of a wooden post sticking up from the water. It stayed for so long – and allowed me such extravagant views – that I felt obliged to back away and move on, having had more than my fair share of this gorgeous creature.

September is an active time for kingfishers. They’re fiercely territorial and, in early autumn, birds are aggressively establishing whose patch is going to be whose for the winter. After spending the summer breeding, adult pairs drive out any youngsters that are still hanging around the home – along with any other interlopers – before dividing their stretch of the river between them and splitting up to fend for themselves.

Kingfishers suffer severely during the coldest months: prolonged spells of icy weather, when rivers and streams freeze over, prevent them from hunting and can cause the UK’s population (which is thought to be around 5,000 pairs) to crash. Fortunately, their prolific breeding ability (kingfishers can have up to three broods a year with six or seven chicks in each) means they usually bounce back relatively quickly.

The Ancient Greeks called the common kingfisher the Halcyon (after the goddess Alcyone). They believed the birds built a floating nest of fish bones and had the power to calm the wind and waves for 14 days while they sat on the eggs. Today, a sighting of a kingfisher is said by some to be followed by a fortnight of guaranteed tranquillity. I’m off on holiday for two weeks soon (to Cornwall rather than Corfu), so I’d better bag myself another kingfisher before I go. Halcyon days indeed.

Find out more about the wildlife of Eastville Park at eastvillepark.org.uk