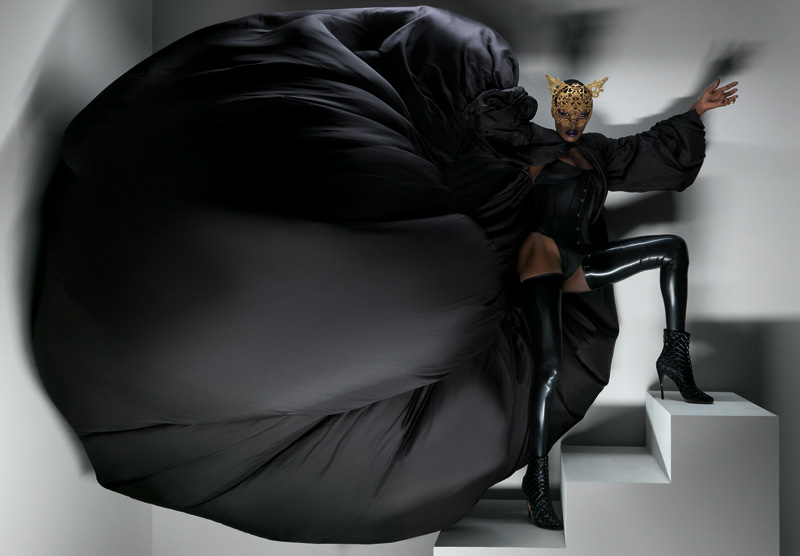 Have you met Ms Jones?

The word ‘iconic’ is chronically overused – but never in reference to this unique star, arriving in Bristol this summer. Photography by Andrea Klarin­

With a career spanning four decades, Jamaican-American singer, songwriter, producer, model and actress Grace Jones secured her first record deal with Jamaican label Island Records in 1977, becoming a star of New York City’s disco scene in the process. A legendary figure in the arts scene, she has inspired the likes of Lady Gaga, Nile Rogers, Annie Lennox and so many others.

Star of the stereo, silver screen and catwalk, Grace Jones has led a life that mere mortals may only dream of. Leaving Jamaica for New York at the age of 13, she embarked on one of the most spectacular artistic careers the world had ever seen. Around Island Records, Capitol, countless runways and fashion houses, her androgynous and controversial style made her a true queen and embodiment of the expression ‘sex, drugs and rock and roll’. She’s been there, seen it and done it and now she’s coming to Bristol to, with no doubt whatsoever, take the stage by storm, so we dug deep to find our favourite moments proving that nobody does it… quite like Grace.

Grace Jones and fashion: few terms go hand in hand as effortlessly as these. Throughout her career, she has walked many a time, however one of her most stand-out appearances came fairly recently. Jones, now in her 70s, closed fashion designer Zendaya’s collaboration collection with Tommy Hilfiger sporting a gold body suit and metallic blazer in a way only she could.

Readers of a certain age may remember watching this live and it’s surely up there as one of the most memorable live TV moments ever as Jones, feeling shunned and ignored by the television host, reacts with a flurry of slaps… Younger readers, imagine Cara Delevingne giving Graham Norton a perfect right hook and you get the picture. This clip can be found all over the internet; watch it for yourself and you can see Harty did nothing to help the situation. Rule number one for a talk show host – never turn your back on a guest, especially if that guest is a leather-clad Grace Jones.

Jones may have spent the ’70s hanging out in the hottest Parisian clubs with the likes of Lagerfeld and Armani. But in 1985 she returned to Paris in an entirely different guise, playing the role of May Day, a seemingly superhuman chief henchwoman in A View to a Kill. After taking out a detective called Aubergine, May Day takes off up the Eiffel Tower with Bond hot on her heels. Reaching the top, all looks lost for the Amazonian assassin, but in true Grace Jones style she leaps off, soaring eagle-like through the air.

Grace had been nominated for her video A One Man Show, but was pipped to the post by bouffant New Romantics, Duran Duran. The record goes that Grace got into a bit of a corridor ruckus with Le Bon and co before being thrown out of an afterparty… She likened the loss to Ordinary People claiming the Best Picture Oscar over Raging Bull and The Elephant Man.

In 1985 Jones released Island Life, a compilation album summing up the first nine years of her musical career. It sits as one of her most successful to date, but despite the quality of the music within, it’s the cover shot that many remember most. The impossibly statuesque pose was actually a montage of separate images – nonetheless it’s one of pop culture’s most famous photographs.

Rock ‘n’ roll riders spawn some weird and wonderful stories: Van Halen requesting M&Ms with all the brown ones removed; Motley Crue with a list of local Alcoholics Anonymous meeting spots and a 12-foot boa constrictor; and Madonna, whose backstage room, it’s said, must look exactly like her own home. However in 2017 a screenshot of Grace’s rider went viral and, looking through it, you can’t deny the woman has style. Louis Roederer Cristal, sashimi and sushi platters and two dozen Findeclare oysters on ice and unopened… Because Grace Jones does her own shucking!

A rather strange Bristol link…

During her time as one of the world’s elite jet-set models, Grace spent a lot of time in the air and developed quite an affinity with Concorde; even harbouring aspirations to fly the iconic jet herself. “The Concorde made life a lot easier, and I was the symbol of a Concorde crowd that had replaced the jet set,” she once said. “I flew on the Concorde so many times I knew the pilots. I knew their families. I could have flown the plane, except I would have wanted to do it naked, sprayed silver, in roller skates.”

A woman of her word

Never one to shy away from making her own opinions public and sticking to them, Grace was not a fan of George W Bush and promised to leave the country should he become president. “There seemed to be more happening in London than in New York; more interesting artistic people to collaborate with,” she said. “I had vowed to leave America if George Bush became president, and the day after he was voted in I left.”

At the festival in 2015 she was carried through the crowd on the shoulders of event security, sporting a vast headdress, unclothed with a mere spattering of body paint covering a few areas… She was 67!

Jones and her guest showed up fashionably late to the 1986 wedding of her Conan co-star Arnold Schwarzenegger. Changing in an airport bathroom and no-show limos meant that at the crucial point of Arnie and Maria’s day, the church doors cracked open and in walked Grace to a sea of unimpressed faces. Her guest, by the way: only Andy Warhol…

Jones was part of one of Hollywood’s original power couples during her spell dating Swedish film giant Dolph Lundgren. It can’t have ended well because one day Grace received a call from her then record producer, calling her into the studio immediately. The studio was 15 minutes away from Grace’s home; she arrived three days later because she was busy burning Dolph’s clothes.