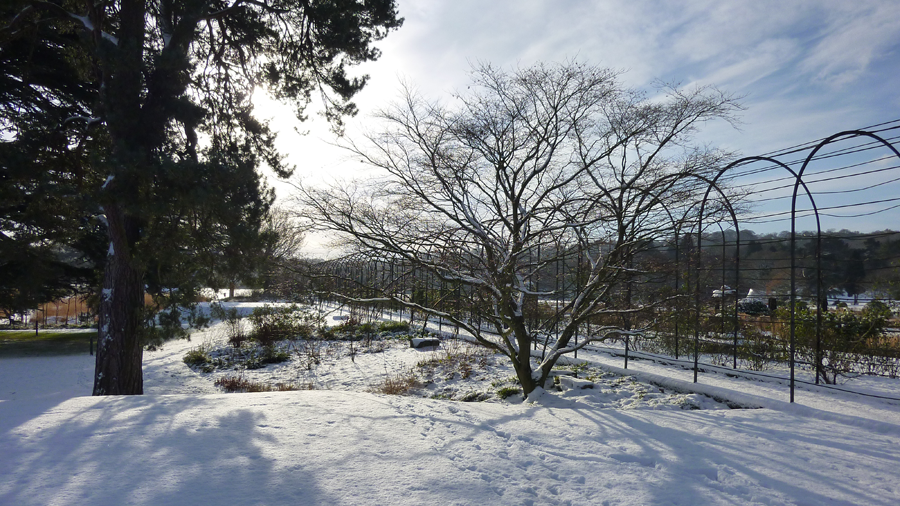 Bristol-based award-winning RHS garden designer Jason Loh welcomes us into the magical world of the winter garden, with plenty of tips to hone your horticultural skills as the days get shorter and the frost starts to settle…

“It was almost quite dark in there and she kept her arms stretched out in front of her so as not to bump her face into the back of the wardrobe… And then she saw that there was a light ahead of her. Something cold and soft was falling on her. A moment later she found that she was standing in the middle of a wood at night-time with snow under her feet and snowflakes falling through the air…”

Most people will have either recognised those words from C.S. Lewis’ ‘The Lion, The Witch and The Wardrobe’ or have themselves felt the magical exuberance of walking in the fresh crisp air of a winter wonderland. Each falling flake of snow unique in its own right, together they create a stunning canvas which covers the landscape in robes of white. Everything looks clean and pristine, there is a sense of peace and rest.

Winter is a very special time of the year. It is a season of respite, when the natural world takes a well-deserved break from a year of productivity and busy-ness. But there is still great beauty to be found even during the coldest months of the year. The problem with most ‘DIY’ domestic gardens is that they are far too dependant on flowers for interest. The result is that one tends to end up with large groups of amorphous shrubs that blend into one another, with patches of colourful flowers visible for a brief season and everything is cut down before the winter. What remains is a garden of lawn and bare soil. Not pretty.

It is important to have a level of visual interest in the garden throughout the year, not just during the growing season. This is where conifers, evergreen planting and stone really stand out. Japanese landscape artists have long understood that a garden needs to have a good ‘foundation’, and not just one that is below ground level.

When foliage fades away, your attention is drawn to elements of the landscape that you have taken for granted before but have always been there. Aged trees become more noticeable, the strength and character of stone takes on a different perspective in the cold of winter. If you stop to consider them, you might see that some of the trees or stone have been weathered through seasons of trials and tribulation… and yet they remain.

I remember visiting my sister-in-law in the Isle of Man and observing trees battered by the winds, leaning to one side with broken branches and beautifully asymmetrical. Large boulders dotted the landscape, characterised by deep textures and colours that come with age.

The form and structure of the garden becomes apparent in winter. Low-growing plants like Phlomis russeliana and Eryngium giganteum look simply beguiling, their strong forms holding well when touched by ice and snow. Morning frosts create beautiful crystalline veils on the tall grasses of Miscanthus silberlicht, and spider webs give an eerie yet fascinating quality to the garden. The pure white of snow rests in soft clouds on the dark evergreen foliage of conifers. The Colour of Magic

Better than the wands available in Diagon Alley, there are spectacular twigs to be found in nature. Some shrubs shed their foliage in winter to reveal their gorgeous stems.

Most people will recognise the crimson red of Dogwood (e.g. Cornus sanguinea, C. alba) that can be found growing along woodland edges and in hedgerows. The red tones emerge only when they are in lots of sunshine, otherwise they tend to be on the plainer side of green. A really interesting one is Red Osier Dogwood (Cornus stolonifera), whose stems change from bright red to purplish-red in winter. The stems of Cornus sericea ‘Flaviramea’ are yellow.

Trees with coloured bark are a fantastic feature, especially where careful thought has been given to the planning of the garden and landscape. Imagine the dazzling-white columns of silver birches against a backdrop of pure snow, their silhouette just barely camouflaged. If you have the space for it, I recommend the Himalayan Birch Betula utilis var. jacquemontii, otherwise known as ‘Grayswood Ghost’.

Another great introduction is the increasingly popular Chinese red birch (Betula albosinesis, ‘Fascination’ or ‘China Ruby’) which is not as tall as our natives but has a lovely coppery-orange satin peeling bark. The silver birch is always a winter favourite, and Jason suggests the Chinese red Betula albosinesis as an alternative to our native trees

For Narnia, the White Witch had changed the landscape so that ‘her spell made it always winter but never Christmas’. There is something melancholic about the denial of hope, when there is nothing to look forward to. I have always taken the winter season as an opportunity for thought, reflection and anticipation… rather than just slumber! Let’s be more deliberate than making rash New Year’s resolutions – in the words of C.S. Lewis, “there are far, far better things ahead than any we leave behind”.

Jason Loh is a multiple award-winning RHS garden designer based in Bristol. Originally from Singapore, he worked as a property solicitor for nearly ten years before retraining at Oxford in landscape and garden design.  He is a keen photographer, horticulturist and artist, who also sings with the Renewal Gospel Choir.

If you would like help creating your very own garden with a heavenly perspective, visit jasonloh.co.uk, call 0117 325 8600 or email design@jasonloh.co.uk