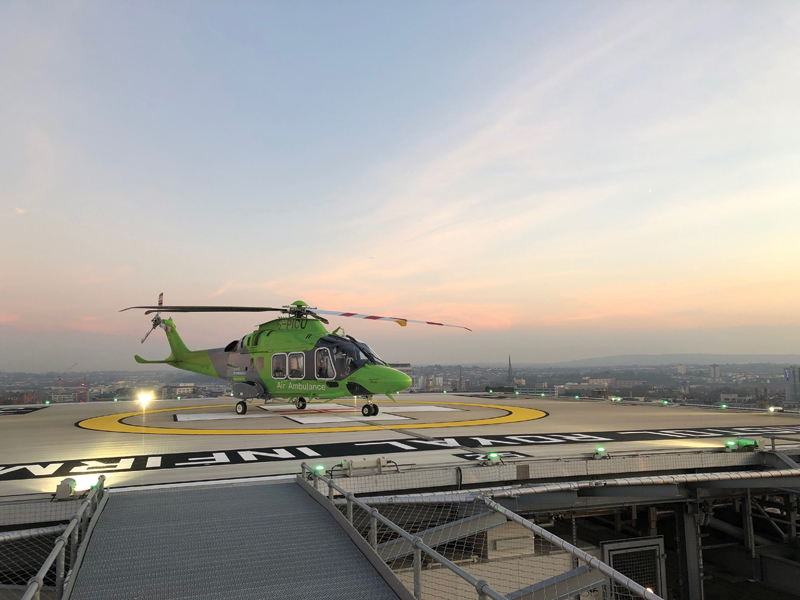 Children’s Air Ambulance is a life-saving charity working with clinical transfer teams in lead hospitals such as Bristol, and has recently become the first service of its kind in the UK to provide ECMO – a system similar to a heart and lung bypass machine – on-board. Hollye Kirkcaldy has more.

Oscar Edwards has just celebrated his first birthday with a lockdown party and a rainbow cake. It wasn’t what his mother Clare had originally planned but, for Oscar, simply reaching the milestone birthday is reason to celebrate. At three days old, Oscar was flown from the Royal Cornwall Hospital to Bristol Children’s Hospital to receive emergency treatment for a rare heart condition. Within hours of being born, Oscar’s oxygen saturation levels had plummeted. Doctors had begun to suspect that he might have something wrong with his heart and had set up a video link with the specialist paediatric cardiac team in Bristol to get a second opinion. “Apparently it was the first time in three years that a baby had been born in Cornwall with the condition and the doctors in Bristol said they wanted Oscar there within 48 hours. It was awful,” Clare says.

While Oscar was kept stable, hospital staff in Cornwall tried to make arrangements for him to be transported to Bristol. Twice a land ambulance was arranged but, on both occasions, it was cancelled. “We completely understood that something more serious had come up, but it was very frustrating, and we were getting to the point of despair,” explains Clare. It was at this point that a call was made to the Children’s Air Ambulance, a national charity which provides lifesaving helicopter transport for babies and children and works closely with clinical transfer teams in lead hospitals, such as Bristol. Within a matter of hours, the Children’s Air Ambulance helicopter had collected a specialist team of doctors from Bristol, flown down to Cornwall and brought Oscar back.

“When we were told the Children’s Air Ambulance was coming, we were shocked and so pleased that he was going to be taken to where he needed to be. We looked out of the hospital window and saw the helicopter like a big green angel in the sky,” Clare recollects.

Oscar is just one of 75 children in the South West for whom the life-saving difference has been made over the last few years by the partnership between the Children’s Air Ambulance and the transport team at the Bristol Children’s Hospital. Set up originally in 1997 to coordinate the transfer of critically ill children within the South West region, the team re-branded as WATCh (Wales and West Acute Transport for Children) in 2015 when it took on additional responsibility for children in Wales. Staffed 24/7 from an ambulance station near Temple Meads, WATCh now receives around 1,500 calls each year from regional hospitals spanning from Cornwall up to Gloucestershire and Wiltshire and across the border into Wales. Half of these calls involve children who need to be moved to a specialist hub – usually Bristol or Cardiff – for more complex treatment.

Bristol Children’s Hospital is one of just a handful of hospitals nationwide with a highly specialised paediatric intensive care. It has a number of major specialities such as its neurosurgical and epilepsy surgery programmes and is the only designated hospital outside of London in the entire south of England and Wales for children with burns. Given this level of expertise and the sheer size of the South West region, it is no surprise the WATCh team is one of the most frequent users of the rapid helicopter transport provided by the CAA.

“We receive calls from physicians in local hospitals about children who have presented as seriously unwell, and the physicians are either looking for advice about management or transport to Bristol or Cardiff,” says Will Marriage, paediatric intensivist and WATCh lead.

“While a small proportion of the calls are trauma-related, most tend to be medical patients with illnesses ranging from meningitis and heart disease to kidney failure and neurological issues.”

The WATCh team acts as a referral hub, with a paediatric intensive care consultant taking the initial call and patching in specialists directly from Bristol Children’s Hospital. The complex decision on whether and how to transfer the child often depends on a range of factors, including an assessment of how unwell the child is, the ability of the local hospital to provide the care needed and how quickly they need to be moved. In some cases, it is no exaggeration to say that speed saves lives, and it’s here that the Children’s Air Ambulance makes that crucial difference. From the time a call comes into WATCh, it can take them just an hour to coordinate with the Children’s Air Ambulance and arrange a rendezvous for the clinical team with the helicopter on the rooftop helipad of the Bristol Royal Infirmary. The helicopter then flies the team down to the local hospital and returns with the patient, with journeys that would have taken hours by road taking minutes by air.

“Being able to transfer children by air makes two huge differences,” says Will. “The reason people are moving these children at all is because the local hospitals are not all set up to care for these children who are critically ill. That expertise lives in Bristol with us, so the first advantage is you can deliver a critical care team of experienced doctors and nurses to the patient much more quickly. We can be at their bedside making a difference sooner.

Secondly, for the patient themselves, the journey time is important. For some children who are particularly unstable, the fact that you can get them to where they need to be as quickly as you can makes a difference.”

According to Donna Young, head of fundraising at Children’s Air Ambulance, flight times are commonly more than four times quicker than transfer by road. “Time saved can mean a life saved and this is where the service really does make a difference in the South West,” she explained. “The aircraft is able to bypass road networks and reach more remote locations.”

Damian Inch knows better than anyone what a quick response can mean to the family of a desperately ill and rapidly deteriorating child.

As a newborn, his daughter Elsie was transferred by air ambulance from North Devon District Hospital to Bristol Children’s Hospital for emergency heart surgery. It is a flight which Damian believes saved Elsie’s life. “She would’ve died – no two ways about it. The speed and the extra time that was saved, had a massive impact,” he said.

Born with an undiagnosed congenital heart disorder, Elsie’s condition was only noticed by chance by a midwife and after taking a sudden turn for the worse, her only option was a transfer to Bristol for emergency specialist surgery. Her critical condition, however, made transport by road a real challenge. The decision was taken to call in WATCh and the Children’s Air Ambulance. “They were hopefully going to transfer her straight back up if she was stabilised, but when they started to put a feeding tube in, she was gasping for air and it took them four hours to stabilise her enough to fly,” says Damian. “It was getting close to being dark but the pilot was keen to take off and she probably wouldn’t have made it if we hadn’t.’’ The 100-mile journey took just 24 minutes by air, delivering Elsie safely into the hands of the surgeons in Bristol. Now three years old, she takes centre stage at nursery with her singing and dancing.

As the needs of the medical teams and patients evolve, so too does the service provided by the Children’s Air Ambulance. Already the only intensive care aircrafts in the country dedicated to paediatric transport since 2012, the charity has just added two new pieces of life-saving equipment into their two bespoke state-of-the-art helicopters. Alongside ventilators, monitors, infusion pumps and a baby pod, they are now the first air ambulance service in the UK to provide ECMO (extra corporeal membrane oxygenation) and nitric oxide functionality on-board. ECMO, a system similar to a heart and lung bypassmachine, is a temporary means of providing oxygen to the body when normal methods of intensive care are failing, while nitric oxide is an inhaled gas used with a ventilator to treat respiratory failure in premature babies and infants. The new equipment enables the doctors to provide pioneering in-flight care for the sickest of children, for whom a transfer by road may not even have been an option.

“Children’s Air Ambulance have been very helpful and proactive in developing their service in response to what the teams have said they wanted,” says Will Marriage. “They fly all the equivalent teams in other major cities across the country, and the reason all the teams work with them is that they’ve been very good at listening to what we say we need. It’s been a very good relationship.”

Donna Young works closely with WATCh through annual training days where the teams are able to immerse themselves in the flight environment and carry out clinical simulation training. “There are also monthly governance calls which provide a forum to debrief mission activity, training needs and any lessons learnt,” she says. “All this is done to ensure the best outcome for the young patients we fly.” With no standard government funding and hit hard by the impact of covid-19, the charity relies on public donations to keep flying its vital missions – a mission can cost £3,500 on average – and has plans to develop its fundraising capabilities in the South West. “Our plan is to build on the network of community fundraisers we have to cover the UK, and the South West region will be a priority for us in this growth,” Donna adds. “It would be fantastic to grow our web of fundraising volunteers into the South West and support more local people with their fundraising. We are exploring challenge events in the area and would encourage budding fundraisers to get in touch with our team so we can help them to raise money for us.”