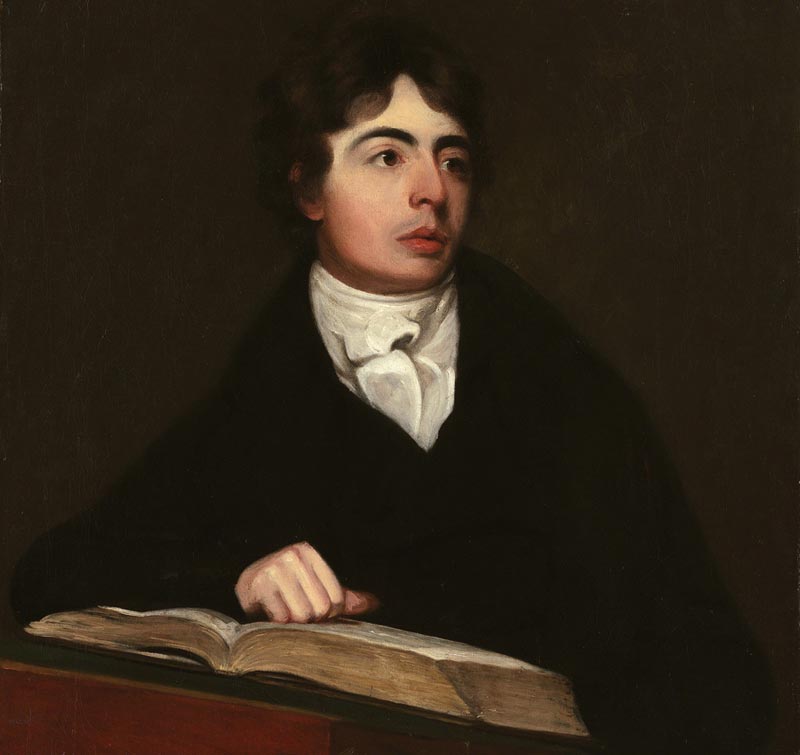 Bristol-born Robert Southey died in relative obscurity but was once a national asset, as Poet Laureate and close pal of fellow Lake Poets Wordsworth and Coleridge. Stephen Roberts looks back at the life, career and contribution of a true wordsmith eclipsed in literary history by the nursery tale he turned into a children’s classic

Goldilocks. If you were a serious writer and contemporary of some of the most famous Romantic poets, as Robert Southey undoubtedly was, would you be frustrated if your fame seemed to rest on a tale about a little girl and three bears? Then read on and learn more, for this is a yarn in itself with many twists and turns…

The poet, who passed away 175 years ago this month, on 21 March 1843, was born in Bristol at 9 Wine Street, on 12 August 1774. Sadly, the extensive bombing the city suffered during the Second World War means the actual house no longer exists, however, a plaque has been placed on a post-war office building close to the original, reading: ‘In a house near this site was born Robert Southey 1774-1843, Poet Laureate 1813’.

Having hovered around the birth spot, it is easy to embark on a Southey tour of Bristol. He was baptised in Christ Church, just yards away in Broad Street – where apparently he liked to return to watch the quarter-jacks striking when he was young. In another sad setback for Southey fans, the church was demolished in 1786, although those admired quarter-jacks were placed on the new building.

Southey’s father, a linen draper, died when he was young, so Robert spent much of his childhood with an aunt, Elizabeth Tyler, in Bath and an uncle who sent him to Westminster for schooling. Southey repaid that act of kindness by being expelled ‘for applying his Jacobin principles to a school magazine’, suggesting his views (influenced by the Jacobin Club in Revolutionary France) were distinctly left of centre. (He’d actually criticised the school’s flogging policy…) Young Robert prospered though, and was next at Balliol in Oxford in 1793 where he was dreaming of an English ‘pantisocracy’ (where everyone is equal). His guiding light was one Samuel Taylor Coleridge, a poet-cum-philosopher, whom he first met in 1794. Southey left Oxford without graduating, although he claimed to have learnt swimming and boating. 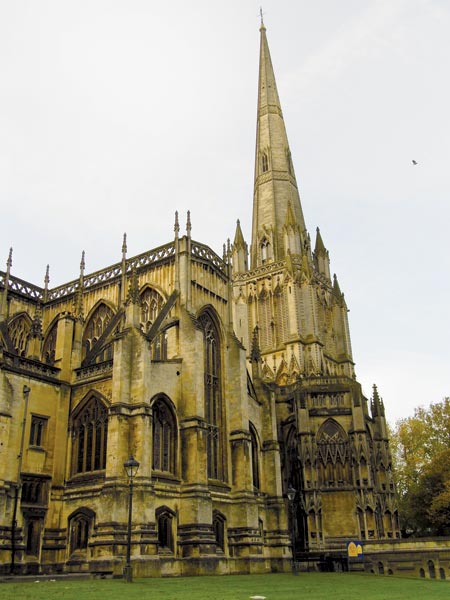 The next stop on the Southey stroll is St Mary Redcliffe, where he secretly married Edith Fricker in 1795, when he was 21. Edith’s elder sister, Sara, meanwhile, married Southey’s buddy Coleridge. There must have been some lively gatherings when the four assembled around the dinner table! Then, finally, a visit to Bristol Cathedral is recommended to see a bust of Southey.

He seems to have got the travel bug shortly after, visiting Lisbon in 1795 and 1800. Experiencing a bit of Europe persuaded Southey he was fortunate to be English and ended his revolutionary fervour: he quietly transitioned into a Tory. Having studied law, he settled in the Lake District where the triumvirate of Coleridge and the two sisters, had already settled. Here Southey remained as one of the so-called ‘Lake Poets’ of the Romantic literary movement, the three main figures being himself, Coleridge and their friend William Wordsworth. The Coleridge-Southey household seems to have depended on Southey economically and he also had seven children of his own to feed.

There was an interlude, however, down on the south coast (1795-1800), when Southey resided with Edith at Burton Cottage in Christchurch. It is a chocolate-box thatch that looks like it could have been lifted from a fairy tale.

Southey was not exactly wealthy. He apparently had £160 a year to live on, which was gifted by his friend, Charles Wynn, from college days (an income of £160 in 1800 would be less than £9,500 today, so, indeed, not a fortune). The government later gave him a similar amount, presumably his stipend as Poet Laureate, a position he attained in 1813, by which time he was regarded as a national asset.

Robert was getting regular work having joined the Quarterly Review in 1809 (he’d have needed it to sustain that large household), and as both a poet and writer. The Goldilocks link first came about in 1834, when Southey published The Doctor, a miscellany including the nursery classic The Three Bears. Now, let’s be accurate here. Southey was a collector of stories as well as a writer of original material, and The Three Bears was a tale being told in the early 19th century. Southey firstly repeated the story (around 1813), then recorded and published it.

His political views had mellowed, meanwhile, which probably made him more acceptable and employable, and having actually become something of a Tory and lurched from left to right must have helped the Tory prime minister Robert Peel, to raise his pension by a further £300 in 1835, which put him on a decent income.

Southey was very much a family man at heart, and it was a grievous blow to him when his wife grew insane and died in 1837. They’d been wed for over 40 years. In the same year he might have brought a shuddering halt to the literary career of one Charlotte Brontë, who approached the great man, seeking advice on her fledgling output. Southey discouraged her from taking up writing, not because she lacked talent but because; “literature cannot be the business of a woman’s life.” He was as wrong then as he would be today. Brontë reckoned Southey’s well-intentioned missive actually encouraged her; perhaps it determined her to prove him wrong. 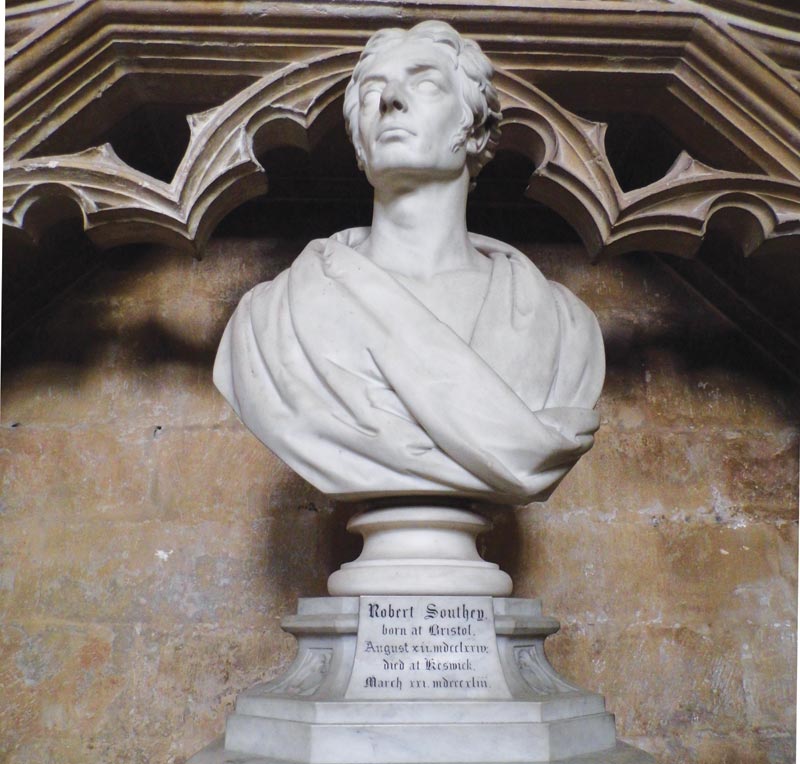 Southey would remarry, to another poet, Catherine Anne Bowles, in 1839 a liaison that caused quarrels within Southey’s family. However, she became little more than a nurse, as Robert headed into his twilight years. He finally passed away in March 1843 due to softening of the brain, aged 68.

We have a poet here who is relatively well-known by name, but surprisingly obscure as far as his poetry is concerned. Some of his pieces were very influential at the time he wrote them, however, including: The Holly Tree; Battle of Blenheim; and Old Woman of Berkeley.

Southey’s ‘fanciful epics’ have been largely dismissed as having ‘little appeal’ whereas his prose, clear and easy, is praised. His The Life of Nelson deserves to belong among the world’s pantheon of universal literature. What with this and Blenheim, I begin to appreciate that his writing was sometimes based on real events and that military themes were not off-limits. He also tackled Joan of Arc (1795), in which he showed his enthusiasm for the French Revolution. He tended, however, to write too much; his historical subjects often over-long. He was also a “voluminous letter writer”. I, myself, receive the occasional e-correspondence beginning, ‘A brief e-mail…’ which is nothing of the sort. I nickname these ‘Southeys’ in the poet’s honour.

Now, it’s funny how things happen sometimes. I arrived in Bristol by train to tackle the Southey tour, and so had my head in a book. Southey was mentioned – a visit he made to Birmingham in 1807, when he was clearly not enamoured with the changes the Industrial Revolution was wreaking: “A heavy cloud of smoke hung over the city…” I read. “The contagions spread far and wide.” Southey may have morphed from revolutionary to Tory, but he retained his conscience and wrote articles advocating state provision of ‘social services’. He was ahead of his time there. His youthful republicanism often came back to haunt as his critics delighted in reminding readers of his chequered past.

My book gave me more of local interest. Those other members of the triumvirate, Coleridge and Wordsworth, first met in Bristol, at the house of a sugar merchant. Bristol loomed large in this story of the Lake Poets. Coleridge and Wordsworth shared a mutual reverence for another Bristol-born poet, Thomas Chatterton, a tragic Romantic who took his own life at the age of 17. With my Southey pictures taken, I was headed back to Temple Meads when I came across Chatterton’s Café. It was the birthplace of Chatterton, generally regarded as the first Romantic poet and inspiration not only to Coleridge and Wordsworth but to Robert Southey too (Chatterton’s house is across the road from St Mary Redcliffe, where Southey was married). Although Chatterton died almost four years to the day before Southey was born, he shared the reverence for this earlier poetic genius, even editing Chatterton’s works.

At first sight, Bristol may not seem the obvious place to have been a hotbed of Romantic poetry, but it was writ large and clear. The tragically short-lived Thomas Chatterton (born here), Coleridge and Wordsworth (met here) and finally, Robert Southey, the glue holding it all together (born here, editor of Chatterton, friend of Wordsworth, brother-in-law of Coleridge). Next time you’re feeling in touch with your Romantic sensibilities, why not go and try the Southey tour for yourself?

The Southey Tour: in summary