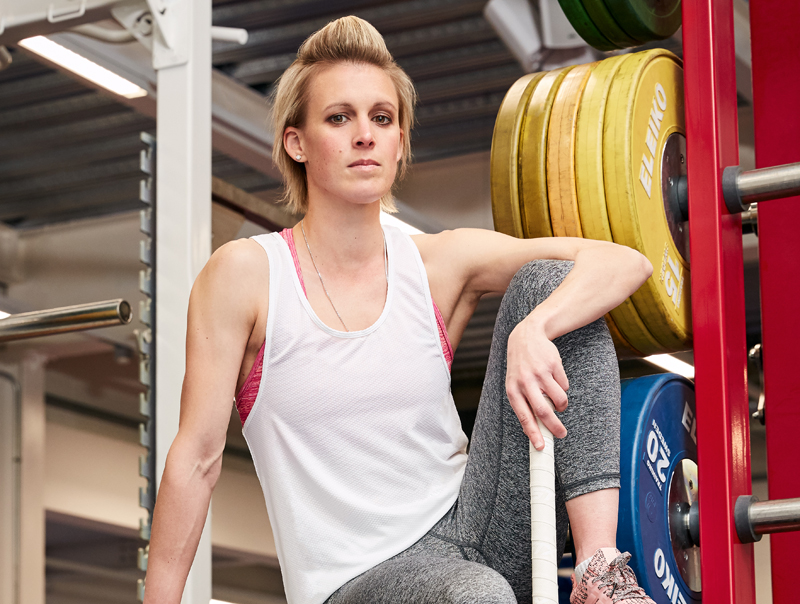 Olympic medallist and hockey ace Alex Danson on getting more people into the sport, fond memories of playing for Clifton Robinsons and this month’s hockey World Cup

Hockey has enjoyed a popularity surge over the past five years, with Olympic medals at London and Rio helping to drive 10,000 new people to join clubs. The number of girls playing the sport has doubled since 2012 and there have been over 100,000 ticket applications for the World Cup at Queen Elizabeth Olympic Park this month. England and GB captain Alex Danson, who has over 100 international goals and has played for Clifton Robinsons in Bristol, told us more…

I grew up in Hampshire; my older brother spurred me on to try different sports – I was always trying to catch him up! I joined Alton hockey club at 12 and then moved to Trojans in Southampton, which is where I received my first England under 16s cap. I’d never been out of the country at that stage and remember going to Lyon with the team. I won my first senior cap when I was 16 in 2001. Women’s sport and hockey is unrecognisable from when I first played for England. To go from where it started, with no funding or central programme, to winning bronze at London 2012 and then gold at Rio is just incredible.

What brought you to Bristol?

My best friend Sarah Ellis, who was playing at Clifton Robinsons in the Investec Premier League, and I had played hockey together since we were 13 years old and after the Rio Olympics we realised it would be the last chance we’d have to play together so she talked me into coming to play in Bristol. To be honest it didn’t take long to persuade me as throughout your playing career you get a sense of different clubs and Clifton Robinsons was just one of those places with a lovely vibe.

Any World Cup goss for us?

The whole squad is so excited, to have the opportunity to play in a home World Cup isn’t something a lot of players are lucky enough to experience and it can’t come fast enough. The England matches are sold out but I’d still encourage anybody to come to the Olympic Park and watch a match. There is so little to choose between the top teams in the world and in particular I’d look out for Stacey Michelson (New Zealand), Lidewij Welten (Netherlands) and María José Granatto (Argentina) who are some of the world’s best players.

Why are there so many more girls playing the sport now?

I think it’s a combination of things. The success of the national side through London 2012 and Rio means hockey’s profile has risen and we’ve had some fantastic role models like Kate Richardson-Walsh. On top of that, England Hockey has been excellent at making sure girls that are interested get the chance to play. The hockey family is an amazing network of clubs and volunteers, and without them giving up their time we wouldn’t have been able to capitalise on the international success. Inspiring kids to pick up sticks is one of the biggest joys of my job. I started The Alex Danson Hockey Academy last year to give 10,000 primary school kids the opportunity to pick up a stick and give hockey a go by 2020 because I believe so much in the power of sport and what it can do for young girls’ confidence.

Is it just youngsters getting involved?

Not at all, England Hockey’s Back to Hockey campaign – getting girls who played the sport to give it another go as adults – has been a great success. Since 2012 they’ve had a 54% rise in over 46s giving it a go.

Why did you personally choose hockey to pursue over other sports?

It was always going to be hockey as it encompasses almost every aspect that a sport should. It requires a mixture of intelligence, athleticism, toughness, skill; for me the way these attributes create different styles and tactics makes it the best sport to both watch and play. What I remember about Bristol and playing for Clifton Robinsons was what a warm and friendly environment it was. Bristol’s a big, beautiful city but it’s also incredibly welcoming.

Obviously Clifton Robinsons but Firebrands is another excellent club where my teammate Lily Owsley used to play.

What are your health and fitness tips?

Find a friend to work out with. If it’s more enjoyable you’re more likely to stick with it and a good friend won’t let you give up! I’ve been a vegetarian since I was a kid so I’m a big advocate of a plant-based diet but either way, lots of fresh veg. Set yourself small targets. If you aim for the overall goal it sometimes seems unachievable and means you’re more likely to give up. Set small goals, reach them, move onto the next. Celebrate the goals you reach! It’s ok to have a rest day and treat yourself. Find the exercise you enjoy. The gym isn’t for everybody and a lot of the time I’d rather be outside walking or cycling.

Which other Bristol sports people do you rate?

I really like Jenny Jones’ story, starting on the West Country dry ski slopes before a long journey to Olympic bronze in Sochi. I’ll also get in trouble if I don’t mention my teammate Lily Owsley. I’m sure she could have gone into athletics but we’re very pleased she chose hockey!