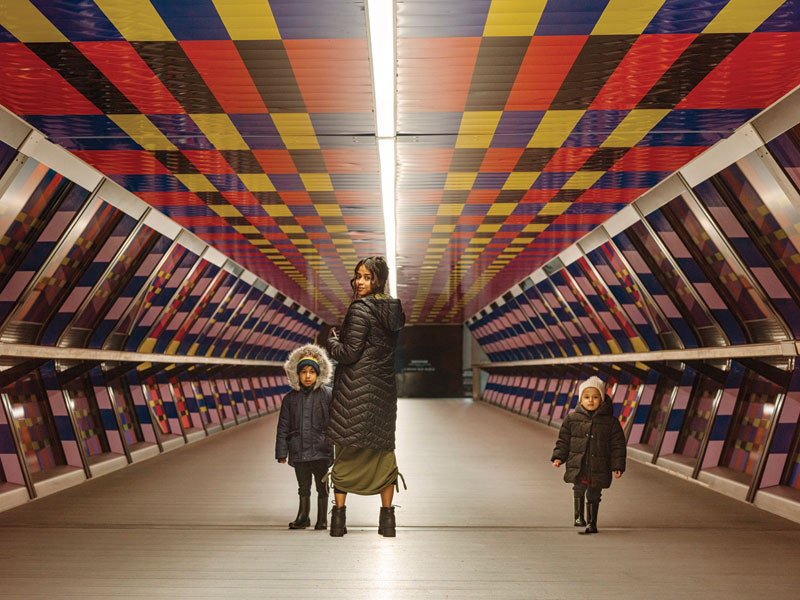 Documentary photographer Polly Braden’s latest exhibition, Holding the Baby, explores the day-to-day reality of what it means to be a single parent in the UK. Now open at Arnolfini, we take a closer look at this powerful collection of portraits and speak to Polly about the extraordinary expression of stoicism, anger, exhaustion, pride, compassion and love she witnessed along the way…

“We need a system that’s kinder, less judging and not set up to punish those who stayed,” says award-winning documentary photographer Polly Braden, who has recently opened her latest exhibition, Holding the Baby, at Arnolfini. After spending time in the homes of seven single parents – six mothers and one father – Polly’s poignant photographic work celebrates the strength of single-parent families, brings the inequalities they face to the fore and explores the issues that are often left out of the national conversation.

The inspiration for the project came in the form of a 2019 United Nations report by poverty expert Philip Alston, which stated that single parents have been hardest hit by austerity measures imposed by the government. It’s important to note that single parents are no longer a small minority in Britain. In fact, according to charity Gingerbread, there are around 1.8 million single parents in the UK, which accounts for nearly a quarter of all British families. With those figures in mind, Polly – a single parent herself – began delving deeper into the policies that must be endured by those who are left “holding the baby”. She started documenting the lives of single parents in London, Liverpool and Bristol, including mother-of-one Carike and mother-of-three Gemma, who live in Easton. When Covid-19 stopped visits, she set up cameras and lights so they could take photos themselves. Polly’s work beautifully encapsulates the families’ sense of adventure, optimism, creativity and ambition that transcends the often difficult situations they encounter. Through their stories, the exhibition transforms national politics into a local concern and places the current childcare system under a microscope, highlighting the desperate need for reform.

“First and foremost I wanted to show single parents in a really positive light, to show what they are able to create,” says Polly. “And through people’s stories, I wanted to explain the inequalities that single-parents face and show the harsh realities of the government’s policies – like how the child maintenance support is really not fit for purpose in this country. But I didn’t want to shout about it, I wanted the stories to tell themselves. I want people to come in, enjoy these families’ lives, get a glimpse of these brilliant people and learn some facts along the way.”

Although the pandemic brought the project to a halt in March 2020, lockdown, without a doubt, accentuated the resilience of single-parent families. Nodding in agreement, Polly says: “Gingerbread did a report saying that single parent families were three times more likely to rely on food banks during the pandemic; 1 in 10 fell out of work. Then there was just the fact of being alone at home, trying to work, trying to home-school. If there’s two people, you can juggle everything but if you’re alone, how do you do that?”

This seamless collaboration of extraordinary minds has made for one of the exhibition’s greatest accomplishments: exposing and celebrating the universality of everyone’s lives

The exhibition at Arnolfini is the final instalment of the series, following shows in London and Liverpool. Holding the Baby was originally created by Museum of the Home in London and curated by Sinéad McCarthy. Each intimate story is accompanied by revealing and tender excerpts from interviews with the parents conducted by journalist Sally Williams, alongside reflective words from a wider group of single parents instigated by writer Claire-Louise Bennet, and data from statistician Rob Minto outlining the daunting reality of what it means to be a single parent in the UK today. This seamless collaboration of extraordinary minds has made for one of the exhibition’s greatest accomplishments: exposing and celebrating the universality of everyone’s lives. “It is the will to make a really good home for your kids that is very universal,” adds Polly.

The award-winning photographer is renowned for exploring the relationship between everyday life, work, leisure and economics and Holding the Baby is simply the most recent piece of work in a long line of deeply moving and thought-provoking projects. In 2016, Polly’s national exhibition, Great Interactions, looked to engage decision-makers and the wider public to ensure that people with learning disabilities received the same opportunities as anyone else.

In 2018, she further explored what would happen to individuals if they didn’t receive the right support. Her exhibition, Out of the Shadows, saw Polly once again collaborate with Sally Williams to offer a very different view on the human cost of imprisoning people with learning disabilities and/or autism. Her work not only drew attention to the sheer number of people currently trapped within the criminal justice system but it provided a springboard for debate and discussion.

Today and as always, Polly’s work is stitched together by those courageous enough to tell their stories, from women who have escaped abusive marriages to foster carers who have become single parents via sperm donors to divorced couples who have successfully forged co-parenting relationships. What’s more, in spite of carrying the full weight of a cruel system on their shoulders, suffering from benefit sanctions, welfare cuts, discrimination and all its associated ills, Polly makes it clear that single-parents are able to succeed in giving their children the most important thing of all: a sense of home and belonging.

Polly Braden: Holding the Baby is running at Arnolfini until 12 June. The exhibition will be accompanied by a pop-up version at Baraka Café in Easton. Polly’s accompanying book of the same name, with words by Sally Williams and Claire-Louise Bennett, will be published by Dewi Lewis on 31 March and available to buy at: dewilewis.com

All images by Polly Braden | Courtesy of the artist