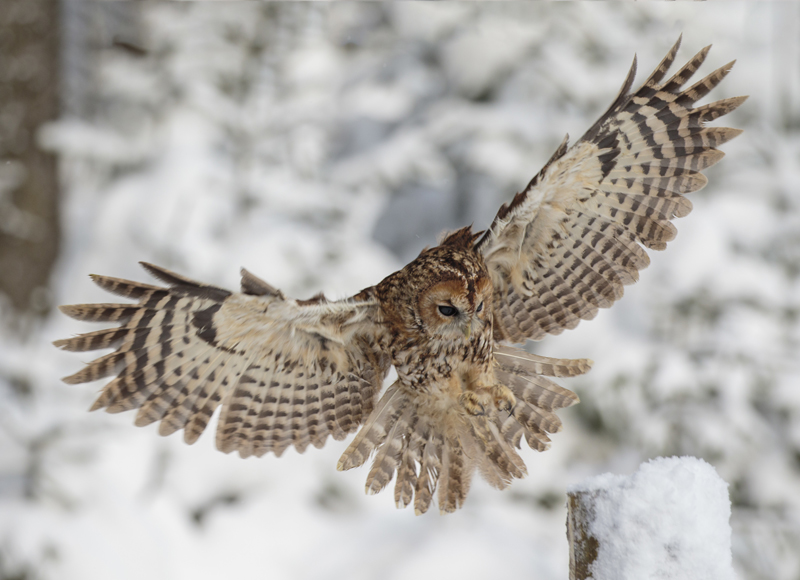 Bristol’s owls are loved-up and loud. Listen out for them this month, says Pete Dommett

In The Tale of Squirrel Nutkin by Beatrix Potter, Nutkin and his bushy-tailed cousins sail across a lake (in rafts made from twigs) to Owl Island. There, they ask Old Brown the owl for permission to forage for nuts in his woods. He’s a curmudgeonly bird, is Mr Brown, so they butter him up with gifts – mice, minnows, wild honey and six fat beetles wrapped in dock leaves – although, at the end of the story [spoiler alert], he bites Nutkin’s tail in half for bothering him.

Brown owl is an old country name for the tawny owl. This is by far our most common species of owl – and the largest – but that doesn’t mean it’s easy to spot (I can count the number of close encounters I’ve had with tawnies on the fingers of one hand). These birds are strictly nocturnal, hunting during the hours of darkness for small mammals, insects, frogs and occasionally fish (but never honey) and sleeping away the day in a tree-hollow or hidden among an ivy-covered trunk.

Consequently, tawny owls are more often heard than seen, especially at this time of year when they’re busy establishing their breeding territories. The familiar ‘tu-whit, tu-whoo’ call – first transcribed by Shakespeare in Love’s Labour’s Lost and immortalised by countless film and TV soundtracks since – is not the cry of a single owl, but a duet. It’s usually the male bird that tu-whoos with the female tu-whitting back (although both sexes can allegedly make both sounds) and it is used during courtship in the autumn and, in late winter, to tell other owls in the area that this pair preside over that particular patch.

Tawny owls are early nesters – the female may be sitting on eggs by the end of this month with the chicks hatching another month after that. Come April or May, the owlets leave their tree-hole home well before they can fly to explore their surroundings. This so-called ‘branching’ sometimes results in a chick falling to the ground and a well-meaning member of the public – on discovering an apparently abandoned bird – putting it back in the tree. But a word of warning: don’t be tempted to do this – the owlet is capable of climbing back up by itself and you may aggravate a watching adult. Tawnies owls are infamously aggressive when defending their brood and have no qualms about attacking a human (a friend of mine twice took a blood-drawing blow to the back of the head when attempting to replace a fallen youngster).

…The familiar ‘tu-whit, tu-whoo’ call – first transcribed by Shakespeare in Love’s Labour’s Lost – is not the cry of a single owl, but a duet…

Tawny owls are birds of countryside woodland, but they’re also our most urban owl. You can find or, most likely, hear them all over Bristol in parks, churchyards and leafy gardens – wherever there are trees large enough for them to roost and nest in and sufficient food. The city dweller’s diet differs from that of its country cousin, however. Towny owls (sic) frequently feed on small birds, snatching them from their night-time roosts, while rodents (the preferred prey items on a rural menu) make up a measly 7% of their meals.

Why not pay old Mr Brown a visit? Go to Eastville Park and look across the lake to Owl Island. With a bit of luck, he’ll be at home, sitting in his wooden house and still looking a bit bad-tempered. So say hello, but please, be polite and don’t bother him for too long. You never know what might happen.