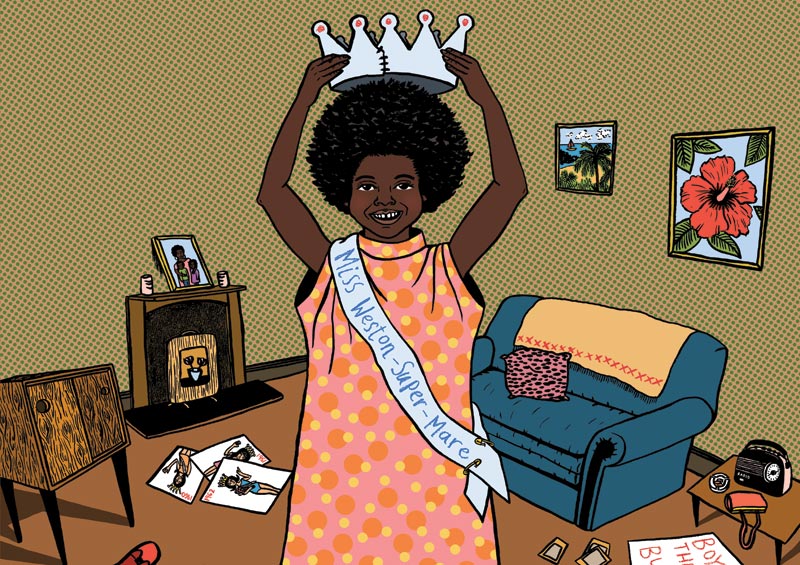 If the crown fits: Princess & The Hustler at BOV

The year is 1963. Civil rights activists are taking to the streets of Bristol, the city’s buses are being boycotted, and the national news is turning its cameras to the West Country.

By the early 1960s, despite there being labour shortages in local transport companies, the Bristol Omnibus Company colour bar meant that many of the local residents were refused jobs as bus crews on the basis of being black or Asian.

After months of pressure the bus company agreed that discrimination would not be tolerated when employing new crews. The Bristol Bus Boycott is seen by many as having a vital influence on the UK parliament passing the Race Relations Act in 1965, making racial discrimination unlawful in public places.

This pivotal story in the British civil rights movement is often overlooked or forgotten. Some Bristol residents may never have heard of it, yet it played a crucial role in securing anti-discrimination laws in this country.
The tale is now being used as the backdrop for award-winning local playwright Chinonyerem Odimba’s new play, Princess and The Hustler, which opens at Bristol Old Vic this month. Shortlisted for the Alfred Fagon Award 2018 for Best New Play, it follows 10-year-old Princess as she conjures up a plan for how to win the Weston-Super-Mare Beauty Contest. But with a busy working mum, a brother who doesn’t even want to take her picture, and civil rights activists protesting on the streets, Princess discovers what it really means to be black and beautiful. We caught up with Chinonyerem ro find out more about the production…

Could you tell us a little about Princess and The Hustler and where the idea came from?

The story follows a young girl who has big dreams to win a local beauty pageant. When her estranged father comes back into her life, her dreams are threatened. For me the idea came from wanting to write a story that spoke to what I call ‘black girl joy’ – a celebration of what it is to be a young, black, British girl full of dreams for the future, and the joys of being young and innocent, as well as the magic of that.

It is set against the backdrop of the 1963 Bristol Bus Boycott. Why did you choose this particular event?

I was initially unsure about taking on the Bristol Bus Boycott story. I felt that many people were also trying to tell the story. I had known, talked to and interviewed Paul Stephenson (who led a boycott of the Bristol Omnibus Company) many times, and if I’m honest, I was a little scared of not doing the story justice. However when I started to talk about it as an event in Bristol and British history, I realised that actually there are still lots of people who don’t know that story. Yet it is a national story because it is one of the emergence of a black civil rights movement in the UK and it led to the first race equalities act in this country. It suddenly felt important to tell it and to tell it in a way that we could all understand – and highlight how it affects us personally.

How does the bus boycott influence the lives of the characters and the plot of the play?

The boycott is, in one way, a catalyst for all the characters to come to some understanding of how they can create a future in Bristol; how they work and live in this country; and how they find a voice to fight the racial injustice they are faced with.

Princess’ brother is a budding photographer. How did photography play a part in the British civil rights movement in the 1960s?

One of the first points of contact I had in researching the play was photographs. I remember, one day, thinking how lucky we are that there were men like Princess’ brother to capture those moments because without them, who would have told these visual stories of the black British experience? Photographers like Raphael Albert (who photographed many black beauty queens) and Armet Francis were capturing the ordinary, as well as the extraordinary, lives of black people in the 1960s and ’70s, capturing worlds and people that can inspire the next generation of civil rights campaigners. That was when I decided to make Princess’ brother and his friends photographers.

Do you think that audiences will be shocked by the historical context of the play, especially in regards to discrimination and colour bars in the workplace?

In some ways yes, and in some ways no. If anything this is an opportunity to learn more about our history as a city.

What has it been like working with director Dawn Walton and the creative team?

The creative team are amazing. Even after years of being in rehearsal rooms, I am still in awe of how hard so many people are working to make my little dreams come true.

People from the local communities of the cities and towns where the play is touring will be taking part in the production. Why did you want to get local people involved?

This element of the play was always part of the story I want to tell. I wrote in the involvement of local people from the first draft because it felt important that we do not assume that some of the things the play touches on are just a challenge for Princess. I want people from across Bristol to be part of the discovery of her beauty, and this exciting moment in Bristol’s history.

Your work has previously been shown at Bristol Old Vic, including Medea in 2017. Are you excited to be staging this play in the new Weston Studio?

Bristol is my home for the foreseeable future and it is the city in which I became a writer. And I have had my work performed at BOV several times, but now to be part of its new building and its new place in people’s imaginations, it is very exciting.

Princess and the Hustler is on at Bristol Old Vic from 9 – 23 February. Tickets from £16; bristololdvic.org.uk