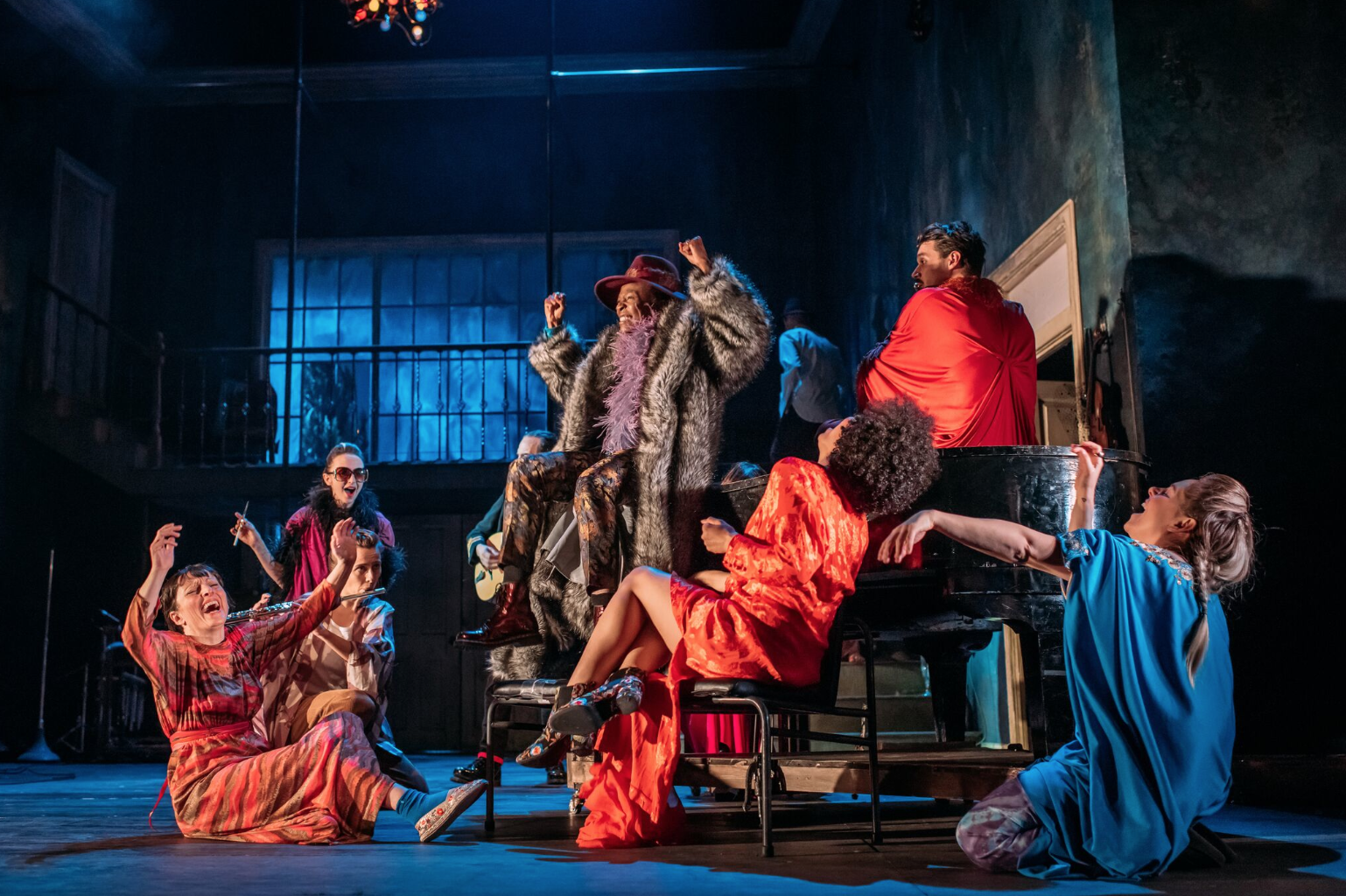 “Blurred genders, crossed boundaries and a world turned upside down” – if ever there was a modern-day era to butt up beautifully against the Bard’s barmy comedy, it’s the Sixties and Seventies.

Director Wils Wilson’s take on Twelfth Night, a collaboration between Bristol Old Vic and Edinburgh’s Royal Lyceum Theatre, is an indulgent feast for the eyes and ears, set in an abandoned, Warhol-inspired mansion. Pegged as a Factory-style afterparty overrun with hedonistic artists of fluid gender and identity, it’s a brilliant bender in all senses of the word – and Ana Inés Jabares-Pita’s gorgeous set design and vibrant, Technicolour costumery make it a visually spectacular one.

Welsh Music Prize winner Meilyr Jones – appearing as sort-of whimsical resident minstrel Curio – has created a score that’s nothing short of superb, played live by the multi-talented actor-musicians, featuring instruments of many ilks including full drum kit and amped guitars but also zither and dulcimer for extra Elizabethan feel. We’re left wondering if we can somehow get our hands on one atmospheric ditty played on pipes recycled from an old organ, lament the fact it’ll never be available on download, and wistfully return to enjoy living in the moment.

The mark of good Shakespeare, for me, is when the story still manages to sink in via osmosis even when you’re not familiar with the play, and this ensemble’s deep understanding of the language on their lips made for an expert modern interpretation; lovestruck Olivia’s incredulous, cringe-tinged repetition of her misjudged chat-up line “what is thy parentage?!” after Viola’s departure elicits an especially appreciative guffaw from everyone sat around us. Comic timing is on-point, most memorably from the three tricksters hiding behind poor, maligned Malvolio as he reads out the forged letter that leads to his yellow-stockinged humiliation.

Stand-out performances come at us from every direction but Christopher Green’s outraged/outrageous cockney gent – “there was never a man so notoriously abused” – is particularly deserving of praise, as is Guy Hughes as Andrew Aguecheek, an Elton-esque vision in white, and chunky platforms, who you’ll struggle not to develop a soft spot for. Dylan Read’s fantastically physical, nimble fool Feste is always entertaining, and most fetching in purple feather wig, Colette Dalal Tchantcho gives gorgeous timbre and pleasing vocal delivery to Duke Orsino, while Lady Tobi (Dawn Sievewright) – in top-to-toe tweed – is a riot throughout.

The forest setting beyond the front doors of the house feels more immediate in the second act, with nature effectively used as another fitting meeting point for the Elizabethan and hippy-dippy Summer-of-Love contexts but the biggest take-away is the message surrounding love and diversity. A wonderful pre-festive treat of a production with a cracking cast, the party continues on King Street until 17 November so do make a guest appearance; they’d love to have you…