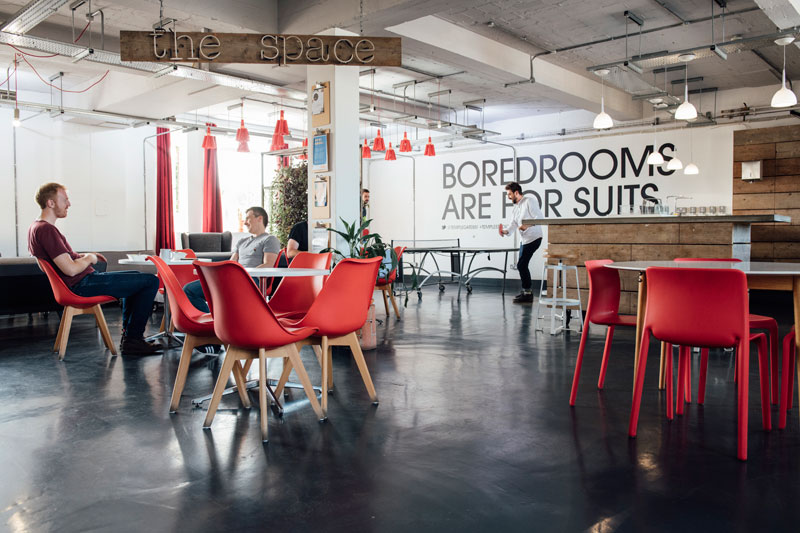 The workplace: the times, they are a-changing

There’s a lot of talk about the 15-minute city, post-Covid, and where the office now sits in the new world order. Placemaker Richard Pearce, CEO of TCN UK – regenerating unloved buildings since 2006 – talks city centres, regional hubs and how the pandemic has accelerated the uptake of positive workplace and wellbeing trends

A ground floor office suite in Bristol, owned by Robert Hitchins Ltd, was brought to market by Colliers recently – emphasising attractive pluses such as cycle storage and showers, because these are the increasingly important must-haves of the post-Covid era. Commuters – some reluctant to use public transport – now need a range of options and alternatives offered to them and the 1,528 sq ft suite at the PS21 building at 21 Prince Street, next to Queen Square, would come, we were told, with two basement parking spaces as well as providing amenities for those biking it in. It got us thinking about offices and their place in society, and chatting to TCN’s Richard Pearce – CEO, chartered surveyor and creative-minded placemaker – who has been ahead of the curve, but pondering the same thing.

“In March, we wondered: where the hell is this going to go? Are people ever going to go back into an office?” Richard admits, about the potential implications of the pandemic. “In the early days it felt properly profound. Then – as ever – human nature prevailed and we realised that everyone wants to come together and, yes, Zoom and Teams are brilliant for certain aspects of life but for other bits it doesn’t come close. So now we are seeing people adjust what they’re doing. We’re starting to find our feet.”
Richard’s team have been busy helping businesses they host to adapt as they work out how they’re going to get back into the office.

“We’ve created the distance; our community/collaborative areas are a dull version of their former self at the moment, with table tennis tables parked up and no beers after work, but they’re still being used for socially distanced meetings. People bring their own cups and one-way systems are key. Everyone’s very respectful of each other and helping each other out – I think that’s been quite heartening across the board. We’re missing the good old office booze-up on Thursday night but the fun stuff will come back. We just have to endure this period to get back to those sunny uplands.”

Different features to the fore

TCN’s portfolio is a picture of beautifully regenerated old buildings that have had new life jazzily injected into every corridor. “The joy of these old buildings with character and soul is they’ve normally got a lot of ways in and out, lots of space, nooks and crannies for people to keep out of each other’s way, windows that open and close and good old-fashioned things like that, which suddenly are really important. We don’t do tall multi-storey buildings, we’re not fans of skyscrapers, so the majority of people can use the stairs and don’t have to queue at lifts. It’s about simple buildings that don’t cost a fortune for people to work in and be inspired by.”

It’s interesting how different features are coming to the fore; it might not have mattered how many entrances an office building had before but now it’s really quite a plus point. At Temple Studios in Bristol, a lot of the ground-floor units have got their own front door – something that’s become more valuable as workers prioritise getting in safely and controlling their own environment. “We’ve never been massive champions of coworking,” says Richard; “we tried it but we like everyone having their own offices so they can make them their own with their culture and identity as a business, then come out and use the shared areas when they want to get together or collaborate. They know we’ll get them to their door safely with our one-way systems, sanitisers and minimised touch points, then they control who comes and goes.”

First and foremost, the modern office, as we move ahead, needs to both facilitate safety and be affordable. It’s not about layering on lots of services that you’re trying to make a profit from – bells and whistles such as expensive photocopying – it’s about providing a platform that engenders business growth, in slightly more soulful, spacious buildings.

In Brixton, for example, Piano House – TCN’s imposing converted Victorian warehouse – has an open glass atrium and a roof terrace; at Bristol’s Temple 1852 there are picnic benches stationed in an alfresco suntrap, overlooking street art and next to Temple Meads train station.

It’s about refraining from overdeveloping sites, so there’s always space to breathe and move around. “This is all wellness and lifestyle stuff that people want anyway, and something we’ve championed – as much outdoor space as we can get, and buildings in locations near places like Hart’s Bakery! We’re in this human business and Covid has just accelerated and accentuated what people have always wanted. If you look at the more mainstream institutional industries – people being forced to sit in desks in rows inside, staring at screens – well, that’s been a nightmare for years but no-one’s had any choice because of the old traditions: if you get a ‘day off’ to work from home you’re very lucky and don’t expect it too often, you know? But Google, Facebook, Twitter have been doing flexible working for 20 years – you get a big freelance team when you’re on a project, smaller when you’re not, so flexibility in these industries has always been paramount.”

You do imagine working on a roof terrace to be inspiring. “It’s a wonderful place to come up with ideas and solve problems. Bike racks have been a big thing for us for a while; we put a big one in Temple Studios a year or two ago. At the time, investors were like: ‘You’re giving over all the inside space to bikes? They don’t pay any rent!’ But it’s for the greater good. This is a scheme we want people to subscribe to, it’s lifestyle, a feel-good factor, another reason to come to us. Covid has brought this – what was starting to happen as a trend – into sharp focus, and put it in the mainstream so every employer’s saying it now.”

The 15-minute city, a world away from Wall Street

When TCN bought Piano House in 2006, everyone thought they were mad, says Richard. “It was miles from the West End. They said; who on Earth is going to rent offices in Brixton? And we thought; a lot of people because there’s a cool culture. You don’t need to go to the West End to sit outside a restaurant. Do it locally. That’s always been part of our DNA. Norwich’s Fuel Studios is a classic example. When we were buying it, the valuers said the value would be hit because it’s not in the ‘office location’ or CBD – central business district. This huge, beautiful building was not worth what it could be.

“It’s in the Lanes, the lovely part of Norwich with the barber shop and producers and cocktail bars, and they were telling us that was worse than being out on a business park where all the other offices are. There’s been that mentality for years – but when I finish work I want to go for a drink and a high five. It’s all part of the lifestyle, and obviously there’s the environmental angle to it too which is very important.”

Central is the mantra: live locally, work locally, support your community. “That’s whats life’s about,” says Richard. “That’s more important than which type of Porsche you drive or how many hours you can do, as per the ’80s culture. Local is our Future: Steps to an Economics of Happiness is a great book that came out pre-Covid, about how you can work and enjoy being within a community.”

So, will it all completely push out into boroughs and local economies, as some have suggested? “I think there’ll be a revival of some of areas through people working near home but there’ll still be a place for the city centre. The days are over of trains packed with people piling into the middle of London every day. You might work two days a week in Balham, buy your lunch off a local, then two or three days at head office with the team, going for dinner in the West End. It’s that balance which you can then play out into London versus the regions; great cities that are within reach of London. Norwich, Bristol; regional hubs where you can have an office for 15% of the London cost, attract great staff who appreciate cheaper housing, good schools, getting to the beach on weekends, and when you’ve got the client presentation you jump on a train and an hour or so later you’re in the capital.”

Bristol, he’s found, has been at the forefront of all these positive new trends. “The cycling, the local, the pride in being a Bristolian and championing local causes it’s always been very strong on. That’s why so many people want to live here and it gets great retention from its universities and it’s a wonderful place to work and live – a good example of the 15-minute city in action and a template for where a lot of cities will get to over time, accelerated by this pandemic.”