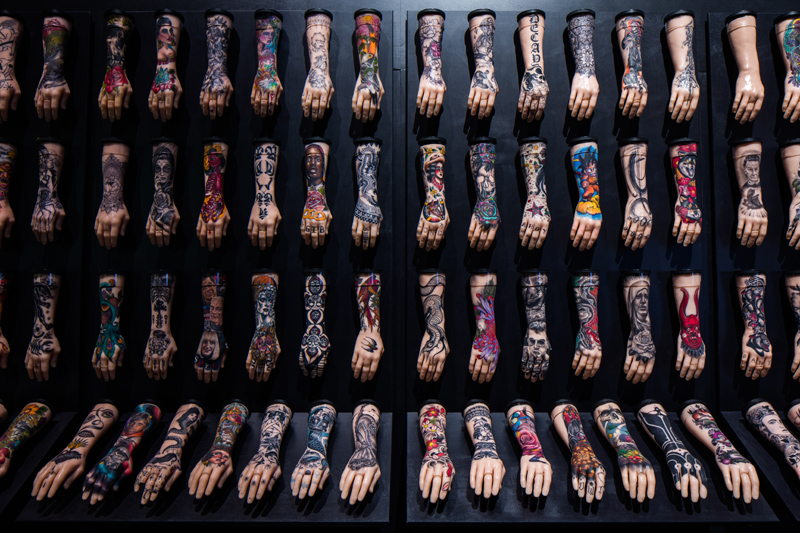 Here’s a thing: tattoos used to be considered posh. That’s right, from ruffians to royalty; sailors to socialites; pilgrims to punks: tattoos have been etched into bodies throughout history. Now, it’s estimated that one in five in the UK is tattooed and the figure rises to one in three for young adults. And while the visibility of tattooing in contemporary culture may feel like something relatively new, tattoo art has always held a significant place in Britain’s history and imagination.

Tattoo: British Tattoo Art Revealed, opening at M Shed on 16 March, is a major new exhibition offering a somewhat ground-breaking, comprehensive history of British tattooing – featuring cutting-edge designers, leading academics and major private collectors and challenging long-standing myths and pre-conceptions about class, gender and age, while celebrating the astonishingly rich artistic heritage of the art form in the UK. While the word ‘tattoo’ may have only come into the English language following Captain Cook’s first voyage, this was not the start of the story. Showcasing the rich maritime past of tattoos, the exhibition also explains how people from all areas of society have been tattooed over the years.

We’re talking the largest gathering of real objects and original tattoo artwork ever assembled in the UK, with the work of major artists from George Burchett, via the Bristol Tattoo Club, to Alex Binnie and Lal Hardy. “There’ll be unique collaborations,” says Steven Bradley, exhibitions officer at M Shed. “We want to make the exhibition truly representative of Bristol’s rich tattoo culture so we have created an online forum for the public and local artists to submit their tattoo tales. Everyone who shares stories with us will receive free tickets to the exhibition as well as an invitation to the opening.”

Visitors can see items from three of the most important private collections of tattoo material in Britain, belonging to Willie Robinson, Jimmy Skuse, and Paul ‘Rambo’ Ramsbottom – a rare chance to clap eyes on original artefacts not otherwise on public display. They can delve into previously unseen private archives that reveal hidden histories, including the real story of Britain’s pioneering female tattoo artist, (and rather radical stuntwoman) Jessie Knight.

Tattoos are a living and uniquely three-dimensional form of art and the show responds to this with an innovative installation which literally brings the art off the gallery wall to create a ‘sculptural map’ of British tattoo art today. The ‘100 Hands Project’ sees silicone arms tattooed with an original design by 100 leading artists across the UK – an artistic legacy for future generations and archival snapshot of a form of art all too often lost to the ravages of time.

Major commissions from three artists working in three very different tattoo traditions feature unique designs on a hyper-realistic body sculpture which speaks to the historic artefacts around it. Tihoti Faara Barff’s work celebrates the modern revival of Tahitian tattooing; while Matt Houston’s commission is a heroic celebration of the sailor tattoo; and Aimée Cornwell, a second-generation artist and rising star in the tattoo world, illustrates how tattooing is breaking down different artistic boundaries with her own form of fantasia.

“While British and global museums have had a longstanding interest in Western tattooing, none have ever managed to fully combine serious academic research with access to the vast but hidden troves of tattoo ephemera kept closely guarded in private collections,” says guest curator Dr Matt Lodder, lecturer in contemporary art history at the University of Essex. “In this exhibition, we have finally been able to match the most current and cutting-edge research on British tattoo history – which challenges all the most deeply held perceptions about the practice, its origins, its extent, and its reception – with unparalleled access to the true custodians of tattooing’s history: the artists and their families who have cared for these objects and their stories over decades.

“Tattooing is a magical, romantic, exciting, often-misunderstood art and we hope our exhibition will communicate some of that magic.”