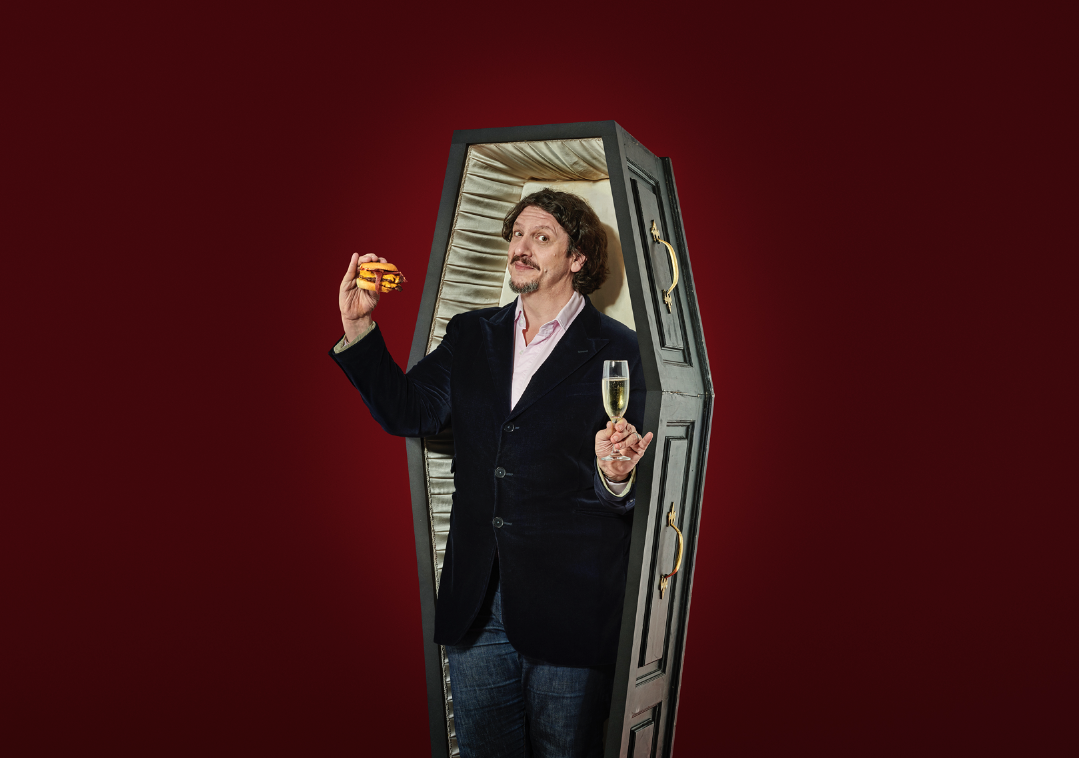 The path to feisty food critic Jay Rayner’s last supper is paved with piano practice, box-set binges and contentment. He talks to Melissa Blease about his new book, his “gloriously ludicrous” day job, and being a frustrated actor at heart

Over the past three decades, Jay Rayner has written extensively across the British and international media, focusing his razor-sharp wit and inimitable way with words on all manner of topics from politics to fashion, the arts and – of course – food. He’s been a MasterChef judge more times than Greg Wallace has told us how much he loves sweet stuff, he’s hosted BBC Radio 4’s Kitchen Cabinet for six years. He broadcasts his own podcast (Out To Lunch), and he’s published four novels and five non-fiction books. An ardent pianist, he formed The Jay Rayner Quartet in 2012, and then there are his legendarily feisty restaurant reviews, published in The Observer every Sunday, attracting an average of around 100,000 online views. If I were asked to select just one course from the Rayner menu to tease my palate, it’d be a tough job making that decision. But Jay himself has recently narrowed his own options down rather dramatically.

In his new book My Last Supper: One Meal, A Lifetime In The Making (Faber & Faber, £16.99), he sets out to answer the one question he is most frequently asked, resulting in a highly personal journey focusing on our relationship with what, where and how we eat. And when he visits Bristol’s Redgrave Theatre next month to tell us all about it in person, we’re in for a sensory feast. “Essentially, I suppose I’ve written a bit of a memoir, but one that I hope has a solid, very thick spine of thoughts around how and what we eat, and how that makes us who we are,” he explains. “Each chapter is named after an ingredient, and the chapter goes through my personal story behind that heading. There are some people who simply won’t get it, because not all people are as obsessed with our dinners as people like you and I are. But for like-minded folk, I’ve put a narrative of my life in food together one plate at a time. Inevitably I suppose, My Last Supper is sort of the story of who I am.”

…That’s the first bit of control we have over our lives: the ability to make the choice to spend your money on Flying Saucers or Sherbet Dib-Dabs. Those experiences stick in the mind because the very process was a marker of our earliest experience of independence…

And who we are, for all of us, goes back a very long way. Would Jay agree that our childhood food memories form the basis of our overall attitude to food as adults? “One of the brilliant things about being a grown-up is that most of us have the ability to eat what we like, when we like,” he says. “But as children, we’re all dependent on others to enable us to eat. I once read a very interesting piece a friend of mine wrote about buying sweets with pocket money, and how that’s the first bit of control we have over our lives: the ability to make the choice to spend your money on Flying Saucers or Sherbet Dib-Dabs. Those experiences stick in the mind not just because we enjoyed eating the sweets, but because the very process was a marker of our earliest experience of independence. And status would have been involved too: learning how we can influence people by being generous. Once we get deep into adulthood, we forget how we learned to become who we are – and many of those early lessons revolved around food.”

So how does he feel about being ‘responsible’ for the food lessons he’s teaching his own children (he has two sons, aged 19 and 15)? “Oh, they’re going their own way,” he sighs. “But when I take them out to eat, I make a point of them knowing how much the bill cost. I don’t want them to think that Dad’s eating-out life is ‘normal’ – in many ways, my own upbringing was privileged in both previous and modern senses of that word, but my parents were keen on making sure that we were aware of that privilege; I try to do the same, with my two.”

…If you’re going to have a rant, you have to make sure that the place you’re ranting about is worthy of it…

So far, Jay and I are enjoying a cordial chat, peppered with none of the fiery seasoning that his back catalogue of reviews is infamous for. So, is Ranty Jay a mere persona? “Oh, if something makes me cross then I love a good rant,” he says. “But I’m careful about it. Yes, my more negative reviews tend to be the most popular. But fewer than a fifth of my reviews in any one year are negative – I honestly don’t go looking for them, and I often argue with myself about how far I should go. If you’re going to have a rant, you have to make sure that the place you’re ranting about is worthy of it, and my job is to keep writing in a way that convinces you that I’m giving a reasonable appraisal. Restaurants are all about everything that happens before anybody walks through the door: the dishes, the ingredients, the atmosphere, the training of the staff, the decor – by the time I rock up, the amount any restaurant can do to turn it from a mediocre one to a good one, let alone from a bad one to a mediocre one, is tiny. If they start being silly or giving me extra treatment because of who I am, I can spot it; having done this gloriously ludicrous job for 20 years, I can spot every trick in the book. So are my reviews honest? Absolutely, totally, and always.”

So I ask him to be honest, then, about which Jay we can expect to meet when he visits Bristol. “I like to think that I’m actually quite a pleasant, genial host,” he laughs. “The thing is, I used to live in fear of being asked onto discussion panels at literary festivals because I hate them – they bore me. My way around the whole promotional tour idea was to come up with a one-man show to accompany my books, travelling the country and visiting small theatres. But if you ask someone to pay money to spend time in your company, you’ve got to deliver something worthwhile, so I invest quite significant resources into the live show to create what I hope will be an entertaining experience; it grows out of the book, but it has to be a separate performance piece. The shows seem to get more and more theatrical over time – I think I’m probably a bit of a frustrated actor at heart.”

…If you ask someone to pay money to spend time in your company, you’ve got to deliver something worthwhile, so I invest quite significant resources into the live show…

Frustrated actor? That’s another side dish to add to the Jay Rayner bill of fare. Does he have any time to pause between the courses that make up his Renaissance Man buffet? “When I’m not writing, I spend an awful lot of time at my piano trying to get to where I need to be,” he says. “My quartet may get to do gigs at Ronnie Scott’s and play some very big festivals, but for me, attempting to fill the gaps that I know I have, as a pianist, is a continuous process. I have an obsessive gym habit too – doing my job, it’s a necessity. But I’m also really good at sitting on the sofa in front of the TV and not feeling guilty about it. My dear old mum [the journalist, broadcaster, novelist and much-loved ‘agony aunt’ Claire Rayner] once said that people go in search of happiness when actually what they could go in search of is contentment. Happiness is a bursting bubble at the top of a champagne glass, but put me on a sofa with a takeaway and a box set and I’m very content – and contentment is a greater goal than happiness.”

Jay Rayner, philosopher? That’s a new one for his burgeoning CV; may his actual last supper take a mega rant-worthy long time to arrive.

Jay Rayner, brings ‘My Last Supper’ to the Redgrave Theatre on 1 October