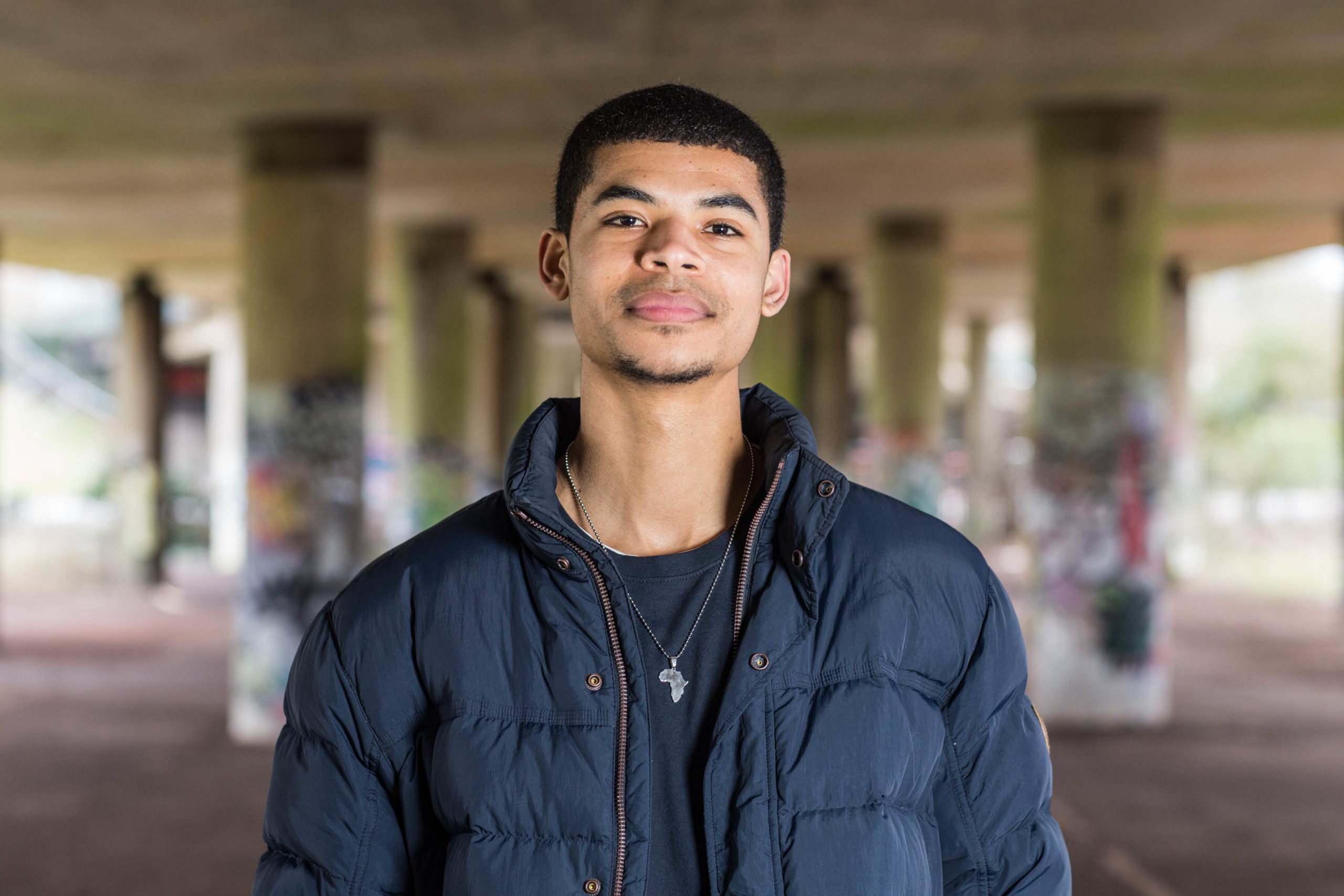 With a focus on culture, politics and identity, Mandem offers an online space for young men of colour to express themselves through music, film and the written word. We found out more from founder Elias Williams, who set up the platform during his studies at University of Bristol

TBM: Why did you create Mandem?
EW: I felt a need to respond to the lack of diversity in the media industries, and I had a strong desire to engage more young people in thinking critically about race, class and gender. I also saw a great importance in men of colour having a space to express their emotions creatively and constructively, while also tackling the negative stereotyping and media coverage that black and Asian males have been prone to over the years. The response has been overwhelmingly positive! People of all genders, classes and ethnicities engage with our content and come to our events. I hope the platform has encouraged many young people to think more deeply about the society we live in today and, from what I hear, it has, so I’m very grateful. There hasn’t really been much resistance but there have been a few words of caution with regards to the subjects that we tackle – a couple of years ago we held an event at Arnolfini titled ‘Do Mandem Need Feminism?’ There were definitely a few eyes turned at that one! But people were only asking that we approach the subject respectfully, and I believe we did in the end. There was a lot of positive feedback about the event, but we all still have a lot to learn.

What do you think of the PressPad initiative set up to help stamp out elitism in journalism and help aspiring journalists into the profession?It sounds like a great initiative. It makes me feel uncomfortable that so many people high up in the media went to Oxford or Cambridge University – or came from very privileged backgrounds. Initiatives like PressPad can hopefully make journalism a far more representative industry.

What are your thoughts on the lack of black students studying history?
I find it a little embarrassing to be honest. I don’t blame black students, but it saddens me that so many are put off by the idea of studying history because of either how irrelevant or Eurocentric the subject matter on offer is. I encourage black students to study history at university so that they can have a role in changing the curriculum. Most black students have a choice between slavery or the civil rights movement when it comes to studying ‘black history’ – if more module options were on offer, such as precolonial African history or the role of the Moors in Spain, perhaps more black students would be interested.

Do you think Olivette Otele being made the University of Bristol’s professor of the history of slavery will have an inspiring impact?
You’d hope so but it’s a deep-rooted problem that won’t be solved overnight. Many people in this country still get deeply offended if you mention anything negative about the British Empire or Winston Churchill. History is profoundly complicated and it’s not about labelling empires or figures as good or bad – it’s about gaining a better understanding of the whole picture. Otele’s work is crucial for that very reason. She provides us with a much wider understanding of black history, so I’m sure her presence at Bristol and her successful career will inspire many young black students to pursue history.

How would you describe your own experience at University of Bristol?
I was only there for a year to complete my MA so by no means did I have the full experience. But I was there long enough to understand how isolating studying there can feel for people from a working-class background or people of colour. UoB has a very high intake of private school students, and there aren’t many black students there. I’m lucky in the sense that my personality enables me to get on with a wide range of people. I went to state school but I was friends with a few private school kids growing up, so I realise they’re not from a different planet, they’re just exposed to different things.

What, does it seem to you, are the big concerns of young men of colour in Bristol today?
In Bristol, and across the UK, men of colour often have to be more cautious than other demographics in their interactions with the police, due to a history of negative racialisations and police brutality. But beyond that, I think young men of colour just want to feel human – and not to feel like they’re a threat to society because of the media’s obsession with the minuscule percentage that are involved in inner-city crime or terrorism.

What events does Mandem have coming up?
We have a really exciting event coming up at the Barbican in London on 12 March. Make the journey from Bristol if you can! It will be an interesting exploration of black British masculinity as it relates to grime music. In Bristol we have an exciting event coming up in collaboration with Cables & Cameras on 6 June to look out for.

Any other projects in the pipeline for 2020?
I have a few short film scripts in the pipeline that I’m hoping to get funding for very soon. One explores the historical roots of the zombie movie genre in Haitian history, while the other provides a dystopian outlook on gender relations. There are a few other bits and bobs on the way with Mandem – you can stay up to date on our social media.

What challenges have you overcome? Who has encouraged you?
The biggest challenge has been maintaining the Mandem platform and keeping the content consistent. It’s a lot easier to start something than to keep something running – 16 April will be our third anniversary so I’m very proud about that. Cables & Cameras, Arnolfini, Watershed, UWE Bristol Equity and the Bristol Cable have all been very supportive. One of my course leaders at UWE Film was very supportive too. In all honesty, there’s too many to count! I’m forever grateful to the creatives and organisations who have supported the work I do.

What has been your career highlight so far? What are your goals now?
I feel a bit young to call it a career yet (!) but I would say one of the big highlights was getting commissioned to do a Channel 4 Random Acts film about West African legend Mansa Musa. Hosting an event with Lowkey was amazing – he’s been an idol of mine since I was a teen so getting to interview him was good fun. Being invited to hold an event at the Barbican Centre, one of the most prestigious art venues in the world, hasn’t quite settled in yet – that’s definitely a big highlight. My goals are to keep growing the platform, and continue improving on my writing and directing skills (while also taking good care of my mental health).

Who inspires you in Bristol and why?
Vince Baidoo, Michael Jenkins, Lawrence Hoo just to name a few. They have all greatly inspired me in their own way, and their tenacity and persistence in what they do is admirable. Freya Billington, my old course leader at UWE, is very inspiring and is always going above and beyond to support filmmaking students. My brother Timon is a massive inspiration to me too; he’s been running the Mandem platform with me since late 2017.

Education and patient collectivism will eradicate racism, not Twitter arguments about Iggy Azalea…

What annoys you about discussions over issues of race?
I’m kind of beyond getting annoyed at anything relating to race now. I’ve seen and heard it all, and would prefer to put my energy into acknowledging the achievements of people of colour, rather than debating the hardships – though they’re not to be disregarded! One of the things that has previously frustrated me is the lack of attention given to the nuances. Many people want to look at the world in a binary fashion because it’s easier to make sense of and rationalise that way. The reality is that we’re all homosapiens, and a few hundred years ago a group of intelligent Europeans figured out a way they could justify the exploitation of their fellow human beings – by using skin colour as a tool of oppression. When the deep historical roots of racism are reduced to conversations about whether white people can wear dreadlocks or not, it becomes very frustrating. Education and patient collectivism will eradicate racism, not Twitter arguments about Iggy Azalea.

One of the things that has frustrated me is the lack of attention given to the nuances. Many people want to look at the world in a binary fashion because it’s easier to make sense of and rationalise that way

Which musicians and other creatives are doing the best job of giving voice to ‘black politics’ currently, in your opinion?
UK rapper Santan Dave. His intelligence and musical genius is beyond questionable at this stage – he has a unique ability to make mainstream music for all to enjoy, while also dropping powerful tracks like Black and Question Time. But we shouldn’t have to rely solely on musicians and unfortunately that’s how it often feels. There are few others I can point to in the UK who I feel truly understand or can articulate ‘black politics’ in a pertinent way. Akala is an obvious one, but again he’s a musician. Filmmakers like Jordan Peele and Ryan Coogler in the US are also brilliant storytellers that offer a new and unique perspective on ‘blackness’.

Which Bristol figures/initiatives do you think need recognising?
Cables & Cameras has done a brilliant job in helping BAME filmmakers over the last couple of years in Bristol and they deserve more recognition. Rising Arts Agency is also doing brilliant things, so keep an eye on their work too. Stacey Olika, Euella Jackson, Olamiposi Ayorinde aka Posidays, and Will Oklok Taylor are just a few talented black Bristol creatives to keep an eye on in 2020. Watch out for the re-launch of Bristol Is The New Black – a black student organisation based at the University of Bristol and helping black students feel less isolated there.

Where do you go to eat, drink, shop and be entertained?
I’m a bit of a workaholic but when I do get a bit of chill time, I like to watch films at the Watershed. You might catch me in the White Harte by Park Street with my fellow MA graduates, talking about world politics from time to time. I’m a fiend for falafel, so I’m frequently stuffing my face with Eat A Pitta meals. I’ve been a vegan for nearly three years now, and Bristol is the vegan Mecca. If anyone knows any other good vegan spots, I’m all ears.