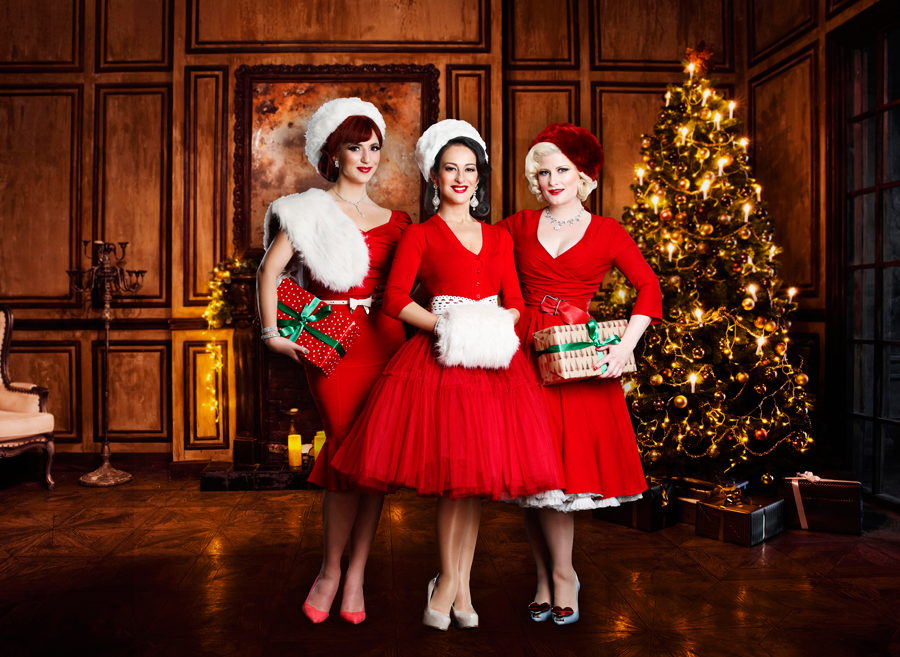 Marcella Puppini talks vinyl, Vivienne Westwood, and founding a new record label, as her hit close-harmony group returns to Bristol to get the festive season off to a swinging start

It’s been over a decade since Italian-born Marcella Puppini formed her vivacious singing trio The Puppini Sisters, specialising in a unique brand of close harmony fusing pop, jazz, swing and more – and since then she’s done everything from conducting orchestras and radio presenting to music producing. With the group – which also features the hugely talented Kate Mullins and Emma Smith – being regulars at Bristol’s Spiegeltent, we thought it was high time for a chat…

So Marcella, what can we expect from this year’s Spiegel show?

Well, as you know, Christmas at the Spiegeltent has become quite a tradition for us, so you can expect our traditional dose of super-camp festive cheer. On top of that, we will be debuting some brand new songs, and – as always – outdoing ourselves in the costume department.

“Working with Vivienne, and before that, studying at Central St Martins College of Art, really taught me to look at things from different angles, to be inquisitive and to never go for the obvious…”

What else is new with you girls?

We recently had a new release: a double album deluxe version of The High Life, containing remixes of all of the tracks on the album. We asked 14 of the world’s top electro-swing producers to collaborate with us, and the result is phenomenal!

You have a fantastic background in fashion – working with Vivienne Westwood before studying a degree in music. Does your fashion knowledge influence your music or vice versa?

That’s an excellent question! I definitely think it does. Working with Vivienne, and before that, studying at Central St Martins College of Art, really taught me to look at things from different angles, to be inquisitive and to never go for the obvious – and I think that it shows! Looking at the number of retro groups today, it’s easy to forget that we were first, that we were doing it at a time when the retro look and sound were extremely underground. And I believe that one of the reasons I get to certain ideas before others is because I take inspiration for music from fashion, and vice versa. You’ve a strong image; where do you get your vintage-inspired outfits?

I design most of our costumes, but we often also combine great vintage finds with high street pieces. It’s all about how you put them together – often all it takes is a waist-cinching belt and some Ruby Woo lipstick.

You’re often ‘antiquing’ rock and pop songs, reworking them into an older style. How do you go about this – is there a process or is it more about improvisation and finding the right sound?

All of our arrangements are scored classically, either by myself or Kate. It’s the only way to get the precision and the intricacy of the harmonies and phrasing. However, once we’ve learned the arrangements and we start performing, they get subtly changed as we start using different inflections. When that happens it’s magical, as we’re all doing it together without discussing it first. That’s what happens when you’ve been singing together for such a long time!

“Swing is infectious and cool, with its intricate syncopated rhythms and echoes of fabulous dance parties…”

What’s your favourite musical era and why?

Most people seem to be quite surprised to find out that I’m really into electronic music: drum and bass, trip hop, even a lot of dance music. But I don’t really have a favourite musical era: I love opera as much as Nick Cave and contemporary hip hop, and of course I am crazy about the swing sound of the ’30s and ’40s.

What drew you to a career in music?

I have always been crazy about it. I started playing the piano at the age of five and grew up singing harmony with my brother and sister. When I was a teenager, I dreamed of being an opera singer, but my family never took music seriously as a career option and so I followed my other passion – drawing – which then took me into a career in fashion. But I never gave up singing and playing, and eventually I realised I would only ever be happy if I made music my career – so I retrained, and the rest is history.

Why do you think your sound and style is still so popular with audiences and listeners?

It’s a combination of two factors. Swing is infectious and cool, with its intricate syncopated rhythms and echoes of fabulous dance parties; and on a different level, there’s the nostalgic appeal of a make-believe era of solid values and simpler lifestyle – the good old days.

Vinyl has made a huge comeback – do you think the way we listen to music is unimportant, or all part of the experience?

While I’m perfectly able to enjoy listening to MP3s on my iPhone, there’s no denying that there’s something special about vinyl. I remember the first time I heard an old Yma Sumac recording on vinyl, a couple of years ago – it was incredible. It know it sounds pretentious to refer to the depth of the sound of vinyl, but those are the only words I can think of to describe it.

You often maintain close harmonies while singing, does this come fairly naturally to you all or is there a lot of practice involved?

We all have a natural ability to sing harmony, but I’d be lying if I told you it doesn’t also involve tons of practice! Three big voices, three sparkling personalities…

Who is the biggest diva of the group?

It’s a daily contest, and no one has ever been able to decide on a winner.

What has been the highlight so far?

2016 has been quite a fabulous year, to be honest. Self-releasing an album (alongside the release of my solo album!) has been an exhilarating experience – as well as a massive learning curve. We’ve also founded Millionaire Records, with the intention of signing other artists in a couple of years’ time.

We hear you’ve been learning to produce?

Yes, and to DJ. I’ve been gigging as a DJ for the last few months, and I’m getting pretty good at it, and my production skills are getting better too. I’ve been working on a few hip hop noir tracks with R.A. The Rugged Man, which will probably culminate in an EP, and my aim is to be able to start producing these myself.

I’d say Prince Charles. Though Michael Bublé and Hugh Laurie are also fans. We’ve not done too badly, have we?