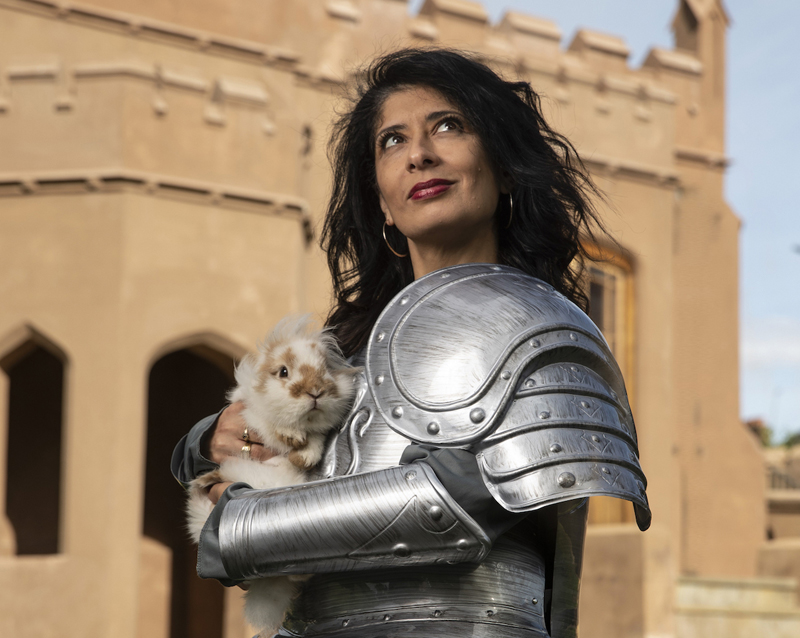 Sharp cultural commentator Shappi Khorsandi’s new show is a love letter to the comedy clubs of yore. The funny-woman fills James Rampton in on how the comedy scene has changed, and being a terrible schmoozer

Stand-up comedy has undergone a huge transformation over the last 20 years. “It’s got cleaner and more sober and a lot more career-minded,” reflects Shappi Khorsandi. “You meet 20-year-olds on the comedy circuit now who have a five-year plan. I’m sure stand-up is something career advisers at top private schools are telling their students to do. ‘You don’t want to go into the money markets or the law. You want to go into stand-up’.”

It was all very different when Shappi began her career as a stand-up two decades ago. “I feel thankful that when I started out in comedy, it was punk,” she says. “The ultimate aim was to play the clubs, not telly. That’s why my new show is a love letter to the comedy clubs.”

In Skittish Warrior… Confessions of a Club Comic Shappi looks back fondly on the late 1990s when she first made her name on the comedy circuit. A gifted cultural commentator and sharp-tongued observer, Shappi is a brilliant live performer and over the years she has attracted numerous critical plaudits. The Evening Standard, for instance, declares that she “makes live comedy thrilling.” “Plenty to say,” enthuses The Guardian – and all “with pointedness and potency”. Shappi also has an enormously loyal live following and makes for delightful company – as warm and witty in person as she is on stage, and an hour in her company simply flies by.

“The show is a good opportunity to look back on how it all began,” she says, outlining the inspiration behind it. “This is the 20th anniversary of me being a stand-up – I know, I don’t look old enough! It talks about the bits that stand-ups don’t usually talk about, those behind-the-scenes moments where doors get slammed in your face. It’s about rediscovering that early passion. It’s a celebration of the comedy circuit.”

…When I started out in comedy, it
was punk. The ultimate aim was to play the clubs, not telly…

The best-selling author of two well-received books, A Beginner’s Guide to Acting English and Nina Is Not OK, recalls the early days.
“I was a nervous wreck. It was terrifying. I would phone the Comedy Store for an open spot, and if they picked up, I would put the phone down. I was treading water for the first 10 years. It’s a sort of madness to carry on doing something that is so precarious. But I always knew that there was nothing else along my yellow brick road!”

Skittish Warrior will home in on those moments when Shappi was her own worst enemy. “I’m the queen of sabotage! You go through your early career thinking the best thing is to be very famous, but the chances I’ve had to become very famous I’ve completely scuppered.”

The stand-up goes on to give an example. “I was a guest on 8 Out Of 10 Cats, but I started daydreaming and completely lost the thread. When Jimmy Carr asked, ‘Shappi, what do you think?’, I didn’t know what anyone was talking about. I was daydreaming about becoming famous on the job that would have made me famous if I done it better!

“I’m not a very good schmoozer,” the comic admits. “When I was young, I’d meet a top agent and think it would be hilarious if I told them about gigs where I had died on my arse. That didn’t inspire them to propel me further.”

Shappi recollects one occasion when she vitally failed to schmooze. “I was invited to a showbiz party. Looking around the room, I had clearly only just made the cut. The only person beneath me was a woman who was an extra on EastEnders. Thankfully, I met a guy who told me ‘I live upstairs. The celebrity only invites me to his parties so I don’t complain about the noise’. I chatted to him the whole time about his dog. I didn’t chat to anyone else or get any famous people’s phone numbers.” So, the show is about the funny side of failure? “It’s an ode to being an underdog. We celebrate the underdog. I have to. I don’t have a choice!”

Shappi hastens to add that it’s a fun show. It reflects her deep sense of contentment with where she is at now. “It’s not doom and gloom. I’m perfectly happy. I’m not cut out for a tabloid level of fame. After 20 years, I feel completely comfortable with the fact that I’m vulnerable. It’s OK to say, ‘I’ve messed up so many things’.

“It’s about realising that if you didn’t get something, it wasn’t what you wanted anyway. If it was very important for me to do well on panel shows, I wouldn’t have been daydreaming on panel shows! I look back on my career and see all the times I’ve sabotaged it. But if I had really wanted it, I would have got it. I’ve got two kids, and I really wanted them. It may sound cheesy, but they’re my greatest successes.”

In the show, the stand-up, who has also headlined in her own Comedy Store Special for Comedy Central, astutely points out the pitfalls of celebrity. “It’s about really understanding what a full-time job it is to be famous and to stay there. It has to be at the cost of everything else. Instagram posts don’t post themselves!”

Two years ago, Shappi reached a whole new audience when she appeared on I’m A Celebrity, Get Me Out Of Here! and has no regrets about starring on the reality TV show. “It changed my life. Because you’re hungry and have nothing to do in the jungle, it forces you to look at your life. While I was in there, my life was going on without me. I realised there was no other life I wanted and I desperately wanted to be back in it.

“Some people may see I’m A Celebrity as crass, but it bought me time to re-evaluate. I realised what I didn’t want – to be on the front page of The Sun. That’s not worth anything. Doing stand-up, writing plays and books – those things have value and they were the things I wanted to come back to.”

Shappi achieved her aim when she came out of the jungle and has written a play based on Nina Is Not OK, which will be staged soon. She also teamed up with fellow comedians Jenny Éclair and Natalie Haynes to pen a new musical comedy called Women in Power based on The Assembly Women by Aristophanes. Above all, she is relishing her return to stand-up. “It’s the joy of the job. I get an absolute adrenaline rush on stage. For me, it’s always been about the live stuff. I hope people will take away a great sense of warmth and a lot of heart. The show is saying it’s OK to be exactly who you are. The only person you should ever compete with is yourself.” With a laugh, she adds, “That’s quite wise. Write that down: ‘Shappi wisely said’!”