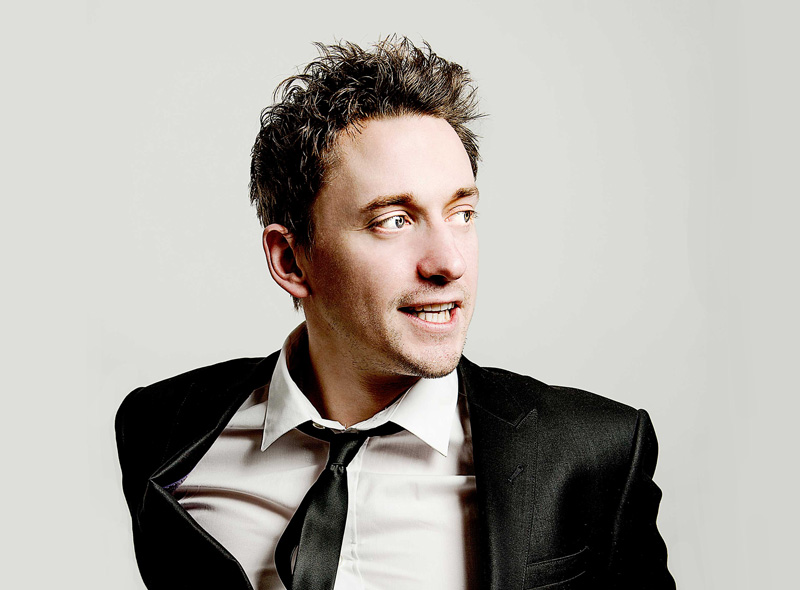 Philip Larkin once said about home; it’s the place in which “no elsewhere underwrites my existence” – and that’s how Bristol comedian John Robins tells us he feels about returning to his home city. “I always look forward to it,” he says. “Performing here feels like slipping back into the way things ought to be.” Which is rather nice, isn’t it? We caught up with the candid comic ahead of his upcoming Queen Square appearance…

What can the Bristol audience expect from the Comedy Garden show?

Fingers crossed, pizza. Will and Cass, who book it, play a very dangerous game of cat and mouse with their food stalls. One year you’ll get pizza, the next year it’s nowhere to be seen. And when I threaten to pull the gig, suddenly, there’s our old friend pizza again. It’s like they’re testing me.

What was it like living in Bristol with Jon Richardson, Russell Howard and Mark Olver? Round-the-clock hi-jinks?

I’m not gonna lie to you, there were some hi-jinks. But at the time Richardson was the only one drinking so they weren’t far beyond mild hi-jinks. And then he cooked a roast that looked so delicious I had to have some white wine with it. That glass of sauvignon blanc probably set my career back seven years I’d say, and I think he knew that when he roast that hellish tender lamb.

Which places would you like to return to if you get time?

Hare On The Hill, The Hillgrove Porter Stores, The Highbury Vaults, The Alma Tavern, The Quinton House, Eldon House. In that order. I used to go to a bar called Roxy’s at the bottom of St Michael’s Hill. It was run by a Dutch guy called Eddie. I went there a lot on my own after finishing work at Borders bookshop. Once I arrived and it was just Eddie, nailing hats to the ceiling. Then a sales rep from Lucky Strike came in and gave me 400 fags. I’d given Eddie two albums – The Best Of Bob James and Frank Zappa’s Roxy & Elsewhere – and he played them as I drank. Then a few weeks later I crashed a wedding reception there and was sick in my mouth one minute before the start of Lent. I didn’t drink for another two years. Until that bloody roast…

What did you learn from your worst gig? And where was your first?

Never assume you’re going to do well. Ashton Court Festival 2005. My first was an open mic night at The Hatchet, run by Mark Olver. That night has had so many incarnations and venues, from The Bunch Of Grapes, to Oppo, Channings, and is still going strong at The White Rabbit. If you traced its various line-ups back to the beginning it’s probably had a better roll of honour than The Comedy Store. In fact, it definitely has.

“That glass of sauvignon blanc probably set my career back seven years I’d say, and I think he knew that when he roast that hellish tender lamb.”

You’re known for your candidness about issues such as mental health; has this been a very conscious thing or is it just part of your style?

I was getting there with stand-up, but then the Radio X show with Elis sped everything up. Chatting to him every week for five years meant I just had nowhere to hide. I couldn’t pretend to be anything I wasn’t, or hide behind any kind of persona. I’m a ludicrous, pathetic man full of shame and frustration, but that can be very interesting comedically.

Do you have a comedy hero?

Very many. Alan Partridge, Phil Kay, Chris Morris, Rik Mayall and Ade Edmondson. But I went to Ian Cognito’s funeral yesterday. I gigged with him a lot when I first started out; he taught me a huge amount about how to play a room, how to commit to each and every gig, every line you deliver. He was the only person I ever saw whose mind was never elsewhere. He never phoned it in, never had somewhere else to be, or another project taking priority. It was all about that room, that audience, that performance at that moment in time. No one else in comedy was as present in the room as he was. He’s a hero to many, many people. I miss him very much.

Ever been to a gig that genuinely changed your life in some way?

Did winning the Edinburgh Comedy Award change things for you?

Career-wise it didn’t change a huge amount to be totally honest. It was all very surreal: winning with Hannah [Gadsby]; and the show I was doing [based on his break-up with Sara Pascoe]. It felt much more like a personal achievement than a comedy achievement. So it’s not like I was suddenly all over TV. That said, these days a few less negative voices call to me across the night as I lie awake in bed. Radio has been much more transformative than the award, and so it should be. Work should be what changes your career, not a competition. I’d much rather people come and see me because they like what I do, than because they expect me to be something I’m not.

I’m afraid I’m a die-hard Ronnie O’Sullivan fan. The only reason I was glad Trump won was because it meant John Higgins didn’t equal Ronnie on five world titles.

So there’s the new Radio 5 show; any other side hustles in the pipeline?

We started on 31 May and I could not wait. Me and Elis at The BBC! It’s insane. I’m also pursuing a career as a terrible golfer with Alex Horne that you can see on our YouTube Channel ‘BadGolf’.

Your next tour kicks off in Bristol; tell us about Hot Shame…

I’m starting the tour with a week at the Tobacco Factory in September and I’m so excited! The show is a kind of extension of shame-related things we’ve chatted about on radio. I think it’s such a powerful emotion, and can really ruin your mental health, so I’ve decided to put it all into the show. A warts-and-all trek through some of my most embarrassing moments. I’ve done a few work-in-progress gigs to prepare and I think it’s going to be great fun. I’m also being supported on tour by Bristol’s own Robin Allender, a musician and comedian who I’m proud to call my friend.