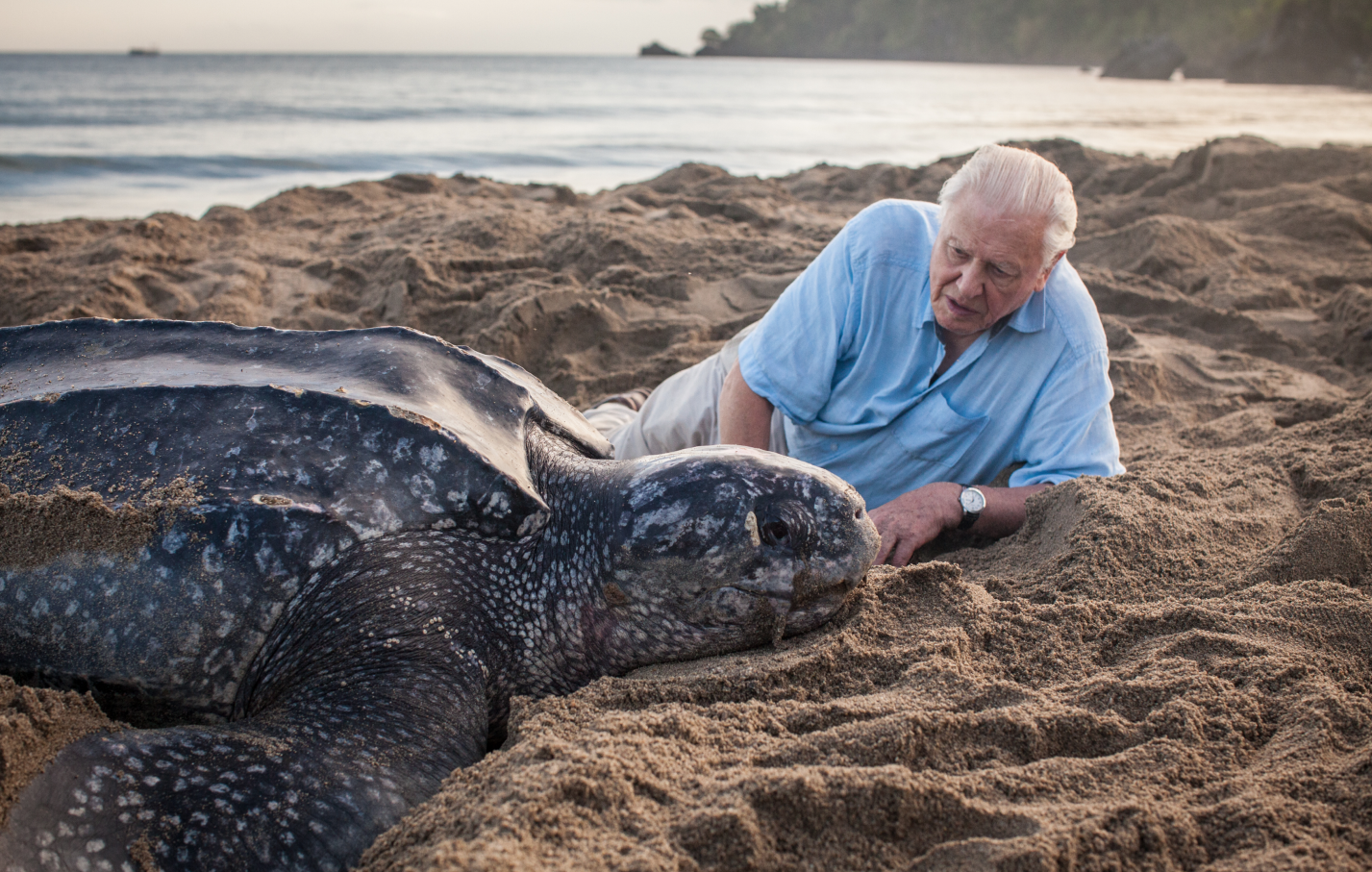 Natural history: Journeys in the wild

One of Attenborough’s elite globe-trotting team, Bristol cameraman Gavin Thurston, talks nature’s wonders – witnessing more of them than anyone has a right to – the common kindness of strangers and going on expeditions dressed as Elvis. Words by Georgette McCready

When I get to my brother’s house in Westbury on Trym I find him on his hands and knees, clearing duckweed from the surface of his pond by hand. He stands to greet me, both hands full of dripping green stuff, and at my questioning face explains that my nephew’s dog, Frank, keeps thinking the weed is grass, trying to walk on it and ending in the water.

Gavin Thurston is a BAFTA and Emmy award-winning cameraman and world record diver (more of that later), one of Sir David Attenborough’s elite team who travel to the remotest spots of the world to bring us footage for series including Our Planet, Blue Planet, Planet Earth, Great Natural Journeys, Life and many more. But to me he’ll always be my teasing, muck-about brother, the one who can’t sit still, the one always working on some new project, whether that’s building a shed from reclaimed pallets and bits of wood for their allotment, or using a CNC router to create precision foam shapes to store his camera equipment safely.

His family and friends have been entertained over the years by stories of his close encounters with gorillas, lions, snakes and octopuses in all kinds of terrain, from the depths of the ocean to mountains and in the jungle. But now, finally and after quite a lot of nagging, Gavin has finally written up these remarkable – some laugh-out-loud funny – stories from his long career. Journeys in the Wild: The Secret Life of a Cameraman, with a foreword by the man himself, David Attenborough, was published on 22 August. In some ways this is like the bit at the end of a wildlife film where we go behind the scenes and find out how a shot was set up and caught. The cameraman can sit for hours, even days, being bitten by thousands of unseen insects, or cramped inside a stuffy hide while waiting for that shot. And, as Gavin reminds us, patience doesn’t always pay off. Animals don’t come into view on cue, even if you have flown halfway round the world to film them.

You can really hear Gavin’s voice in these stories – just a selection from many years of diary keeping – and he has thoughtfully included geographical co-ordinates in the different chapters. “Why have you done that?” asks his sister, slow as ever to grasp the point. “That’s so you can tap them into Google Earth and then you can travel the world from your armchair.” Gavin keys in a series of numbers and within seconds we’re looking down at the site of the Barneo Camp in the Artic Circle. It is this spot that the crew flew to in order to shoot the opening sequence to Frozen Planet, with Sir David suitably wrapped up against the freezing wind to speak the introduction.

Journeys in the Wild takes the reader to places we may never get to visit. I was entranced by Gavin’s description of searching for a glimpse of wild pandas in the Qinling Mountains of China. Gavin and a tracker climbed to about 12,000 feet to the snow-line, following the clues left by the elusive creature (a trail of panda poo). After the tracker left him, Gavin pitched his tent on a ridge just three feet wide, over a drop of 400 feet of scree, where he attempted to sleep but was kept awake by a combination of that drop, the cold, “the crunch, crunch, crunching of the panda working its way through its bamboo dinner” and the excitement of the thought of seeing a real wild panda the next day.

The next morning, installed in his hide, our lone cameraman gets some fabulous footage of a female panda sitting majestically, eating in a clearing among the bamboo, where she is joined by a cute little panda cub who rolls and tumbles around like a toddler. As giant snowflakes start to fall, Gavin recalls that this picture postcard scene was a moment of sheer pleasure.

There are many more special moments, some of them magical, like the sighting of a rare Persian leopard slinking past him in southern Russia, or filming two young gorillas being released from captivity into the forests of Gabon, as playful and curious as boisterous children clambering on the human grown-ups. But other experiences are not so pleasant, such as having rats crawl up his trouser legs while filming in the Karni Mata Hindu Temple in India, home to some 25,000 holy rats.

Gavin and I talk about the impact that Blue Planet II had. This was the series in which David Attenborough issued a wake-up call. “The future of all life depends on us,” was his solemn message, delivered to camera in his characteristically understated style and grabbing the world’s attention. The images of plastic pollution in our oceans, clogging up the seas, killing fish and mammals, were enough to make consumers, politicians and manufacturers sit up and think. The BAFTA award-winning and Emmy-nominated series has revolutionised the way we consume, beginning with cutting down on single-use items such as drinking straws, coffee cups and supermarket packaging.

Did the Blue Planet II team know that what they’d filmed would have such an impact? “We got double the audience we were expecting. One episode got 50 per cent of the TV audience that night – half of all people watching television were choosing to watch a wildlife programme, and that’s extraordinary.”

In Journeys in the Wild we are shown plenty of instances where mankind has destroyed habitats and killed wildlife, but there are also many examples of positive action by people to save animals and protect the environment. It was after his experiences in Borneo and filming the endangered orangutan that Gavin became personally involved in the charity the Borneo Nature Foundation, of which he is now patron. Gavin, his wife Maggie and their sons Thomas and Harry, have lived in Bristol for many years and he has watched the cultural changes taking place in how we shop and our attitude to waste.

“Twenty years ago we’d have gone to the supermarket, loaded up our trolley and come home with loads of single-use carrier bags filled with food,” he says. “We’d have thought how lovely to have fresh sweetcorn, or beans, or flowers out of season – not thinking that they’d have been flown thousands of miles from Kenya or wherever. Customers are now voting with their wallets and choosing more ethically sourced produce.
“I think in 20 years time if you showed a plastic cup to a child and told them there used to be a time when you’d get one of these with coffee in, use the cup once and then throw it away, they’d be shocked and surprised to hear how wasteful we were.”

There some great adventures involving elephants, penguins, octopuses, vampire bats, swarms of bees and many more. But adventures have their risks and I sometimes worry about how many of his nine lives Gavin’s had when you’re reminded of all those near-death experiences, like the time he was in a plane crash, the deadly python he had to literally jump over, the elephant who charged their open-top jeep, or the time when the three-person submarine got stuck in the mud at the very deepest, darkest bottom of the ocean.

It was in that submarine, the Nadir, filming many hours for Blue Planet II, that they set a new world record – 1,000 metres – for the deepest dive in the Southern Ocean. And how did he celebrate? By drinking champagne with his fellow crew members while rising to the surface of the sea to ‘a little less conversation, a little more action’ blasting from the speakers, accompanied by Gavin dressed in the Elvis white suit and mask that go with him on shoots. It breaks the ice when you don’t speak the language, as he points out.

He writes that he feels incredibly privileged to have witnessed more of nature’s wonders than anyone has a right to. “I’ve never once regretted doing what I do. Well, maybe once: when I was arrested by two military guards in Iran for photographing a ‘do not photograph’ sign. What an idiot!” And although he is happy when working in the remotest places on earth far from towns and cities, Gavin pays tribute to some of those he’s met along the way and the kindness of strangers.

“All the people who, in so many countries, whether I could speak their language or not, have gone out of their way to help me. Penniless in Tanzania, an American pilot called Mike bailed me out, paying for my food and hotel. Out with the Dinka in Sudan, a child saved my life when a venomous snake was about to bite me. When filming treehouses in West Papua there were always hands from the Korowai tribe ready to catch me if I lost my grip. This book is a thank you letter to people the world over.”

Journeys in the Wild: The Secret Life of a Cameraman is published by Orion, hardback £16.99. All photography by Gavin Thurston.