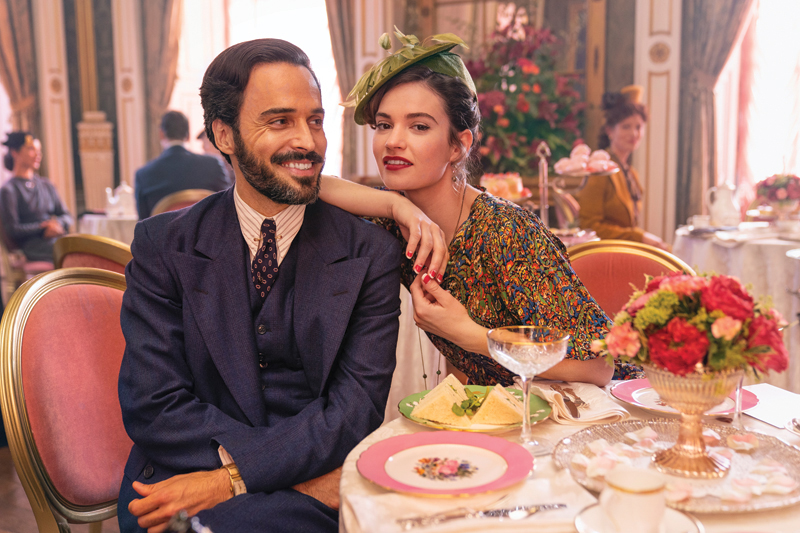 After hitting pause, Bristol’s film and TV arena roared back into action and has managed a pretty positive first quarter on the back of some prestigious developments

Bristol’s film and TV sector had rather an exciting start to 2021, what with the likes of Hollywood legend Christopher Walken being cast in Stephen Merchant’s new locally filmed series The Offenders. We very much enjoyed imagining him doing the Weapon of Choice dance around The Galleries – just one of the locations where the show has been shooting in recent months.

A six-part BBC/Amazon series, from multi-award-winning writer and director Merchant, it follows seven strangers from different walks of life forced together to complete a community payback sentence in Bristol. As they become involved in each other’s lives, they also become involved with a dangerous criminal gang.

We’ll see Academy Award-winner Walken in his first lead British television role, as an offender undertaking community service, alongside Rhianne Barreto who plays gifted but rebellious maths student Rani, hot-housed from a young age by her loving but controlling parents; Gamba Cole as young man Christian, struggling to raise his kid sister while staying one step ahead of notorious Bristol crime gang the Brook Hill Crew; and Merchant as lonely lawyer Greg, coping with divorce, workplace bullying and scary men with knives.

Walken’s character Frank is an inveterate scoundrel trying to reconnect with his family, while Killing Eve’s Darren Boyd, EastEnders’ Clare Perkins and Poldark’s Eleanor Tomlinson join the crew as furious businessman, ageing activist and troubled aristocratic celebutante, respectively. At first, the offenders seem like archetypes easy to pigeonhole, but gradually façades are shed to reveal hidden depths and what made them the people they are – reminding us that no one is all good or all bad and everyone has a story.

“Like so many other productions, we’d just begun filming when Covid-19 struck and we had to shut down,” said Merchant. “I’m delighted we’re now finally able to resume filming with this incredible cast and finish this long-standing passion project. This is the first series I’ve made in my hometown of Bristol and I’m so excited to showcase the city and utilise the amazing local talent.”

Despite the setbacks of the pandemic, Bristol’s TV bods steamed ahead as soon as they were able, continuing to carve out the city’s reputation as an irresistible production base for those looking to move away from the country’s crowded capital. “We’ve started the year on a very strong footing for production in Bristol with robust Covid-19 safety protocols in place for productions to follow while filming on the street,” says Laura Aviles, the Council’s senior film manager. “With the worldwide appetite for screen content stronger than ever, this fast-growing sector is going to be a crucial part of national and regional economic recovery and as a location, Bristol’s film-friendly infrastructure is well-placed to cater for that demand.”

Among those picked as beneficiaries is Indefinite Films which focuses on thought-provoking, extraordinary stories from the real world. Headed up by award-winning director-producer team Bruce Goodison and Kate Cook, the outfit is also receiving mentoring from C4’s commercial affairs, programming and legal teams.

Their first title in 2014 was provocative coming-of-age feature Leave to Remain, about refugee teenagers seeking asylum in the UK. Bagging seven international awards, the debut was acclaimed; Bruce compared to Shane Meadows by the Guardian and praised for his “lively unknown leads” including a young John Boyega in 2012’s My Murder, about a London teenager striving to turn his life around.

Bruce’s career has seen him deliver a host of award-winning titles and recently he directed Anne, ITV’s Hillsborough drama starring Maxine Peake. His BBC One drama Murdered By My Father saw Adeel Aktar receive the first ever BAFTA for Best Leading Male awarded to a non-white actor, and he also directed the first season of Doctor Foster – including that dinner party scene – plus Emmy-nominated film Flight 93: The Flight That Fought Back.

Bristol-based producer Kate – cofounder of Bristol Screen Producers, an alliance that seeks out new and emerging talent – has delivered documentaries and feature length dramas for television. Her credits include The Interrogation Of Tony Martin and Channel 4 thriller The Watchman starring Stephen Graham plus BBC Three musical drama Glasgow Girls. “Bruce and I have worked together for 20 years and share an ambition to uncover unique stories that have a cultural and social significance,” she explains. “Having shot our last two projects in Bristol together, Channel 4’s The Cure and Murder In The Car Park, we’re excited to have their backing to take Indefinite Films to the next level with a view to producing more narrative content out of Bristol. There is a strong creative talent pool in the city that is growing all the time, so we’ll be looking to collaborate with that regional talent, as well as looking further afield and overseas.”

Channel 4’s head of drama Caroline Hollick was impressed by Indefinite’s bold approach to finding ambitious ideas. “This feels like a good time to support the company as they focus on developing some really original ideas that have heaps of potential,” she said. “They’ve also been very proactive in creating a network for talent in the South West, something that is in line with Channel 4’s ambition to see more from the nations and regions in our content.”

“It’s a real boost,” says Bruce. “Kate and I are naturally drawn to tackling challenging subject matter where our central characters face choices that are authentic, but handled in a way that’s really eye-catching and different. We won’t shy away from morally challenging stories from diverse communities. We want to take creative risks with new voices to find the most engaging way to tell true stories. So what a treat to work with some of the brightest heads in TV at Channel 4 who are renowned for championing unheard voices and taking risks.”

What’s on development slate so far? Based on the PC Donal Lynch fiction series by James Nally, there’s Sleepless – about a former Fleet Street agency reporter specialising in crime – and Appy Days, a comedy series about millennial female friendship; The Fledgling, centred on the conflicted experience of becoming a father, heightened by undiagnosed Asperger’s; and Turning, a thriller that imagines a London with a Black mayor with a complex past. Keep an ear to the ground for emerging writer Jeremiah Quinn’s Blind Fate too, about the untold history of German official Adolf Eichmann – found in Argentina by a blind man and his daughter.

One to watch: Drummer TV
Joint MDs Rachel Drummond-Hay and Tamsin Summers set up double BAFTA and multi award-winning company Drummer TV nine years ago in Bristol, specialising in factual programming. Work ranges from returning series for CBBC and documentaries for BBC One, BBC Three, Channel 5 and Channel 4. Recent credits include a short drama: My Best Friend Married A Warrior for BBC iPlayer, presenter-led interview series Getting Personal for BSLBT and series three of Gym Stars for CBBC. They are in development with Channel 4 for a factual series, making an exciting new gardening series and a TX pilot for the world’s first quiz show in British Sign Language. “We are thrilled to have been chosen as one of the Channel 4 emerging indies,” say Rachel and Tamsin, “especially as we were told that our company ethos and long-term commitment to diversity were key parts of the decision, as well as our slate of programme ideas. We also recently won the Bristol Diversity Award for Diverse Production Company so it was a great end to a tricky year. We hope working closely with the factual team at Channel 4 will enable us to take Drummer to the next level.”

One to watch: Blak Wave Productions
When two oceans meet, a Blak Wave is formed, say Michael Jenkins and Somina ‘Mena’ Fombo, creators of Bristol independent production company Blak Wave – another outfit chosen as one of the Channel 4 emerging indies. The pair are committed to producing film and TV that better reflects our society, giving a voice to the unheard and telling untold stories; motivated to create character-driven content that is fresh, imaginative and representative. Passionate about literally changing the face of TV and film, Blak Wave focuses on creating entertaining, emotional and compelling stories across documentary, factual and drama, with credits including Shadow Of Slavery (Channel 4), We Are Not The Virus and Home Carnival Queen (BBC Arts). “We’re working on a short series with BBC, and Pickney, our first drama with the BFI, will be released in 2021,” says Michael. “Being selected for the discretionary award from Channel 4 is really exciting and will hopefully see more of our ideas come to fruition!”

More new Bristol-made TV to look out for

A Discovery of Witches: Season two of the fantasy serial, based on the All Souls trilogy by Deborah Harkness has just aired, featuring interiors shot in Berkeley Square. Catch up on Sky One.

The One: Ten-episode sci-fi series based on the novel by John Marr. Set five minutes in the future, it follows events a decade after a scientific breakthrough has allowed people to use DNA testing to find their ideal partner. But even in perfectly matched couples, partners have secrets, and shocking consequences ensue, as well as wider explosive implications of DNA-based pairings. Bristol Film Office supported filming in locations across Bristol last year. Spring 2021 courtesy of Netflix/Urban Myth.

The Pursuit of Love: BBC has bagged this one and we’re keeping our peepers peeled for a transmission date. Adapted by Emily Mortimer from Nancy Mitford’s 1945 novel, the three-part romantic comedy-drama is set in Europe between the two world wars, following the adventures of the fearless Linda Radlett (Lily James) and her cousin Fanny Logan (Emily Beecham). Cast includes Andrew Scott as Lord Merlin, the Radletts’ eccentric neighbour. Produced by Open Book and Moonage Pictures for BBC One and Amazon Studios. Filming restarted in July assisted by Bristol and Bath Film Offices, with The Bottle Yard Studios housing the opulent sets of Merlinford.

The Last Bus: Ten-part live-action children’s series. A sci-fi road trip adventure that tells the story of a group of mismatched school kids who band together to face a fearsome new machine intelligence. Netflix sci-fi series produced by Wildseed Studios, expected this year – the crew were recently spotted filming on the Downs.

Manhunt: Season two of the ITV detective drama, featuring Martin Clunes and focusing on the murder of French student Amélie Delagrange in London in 2004, is now shooting in the city.

Extinction: This eight-part Sky Original action thriller starring major breakthrough talent Paapa Essiedu (I May Destroy You) is now filming in Bristol – described as a “gripping exploration of memory, fate, and the limits of love”. When Paapa’s character George begins to re-live time after witnessing the world end, and is recruited into an organisation of people who share his ability and harness it to stop global catastrophes, he goes rogue in a bid to save the woman he loves. Made by Urban Myth Productions.