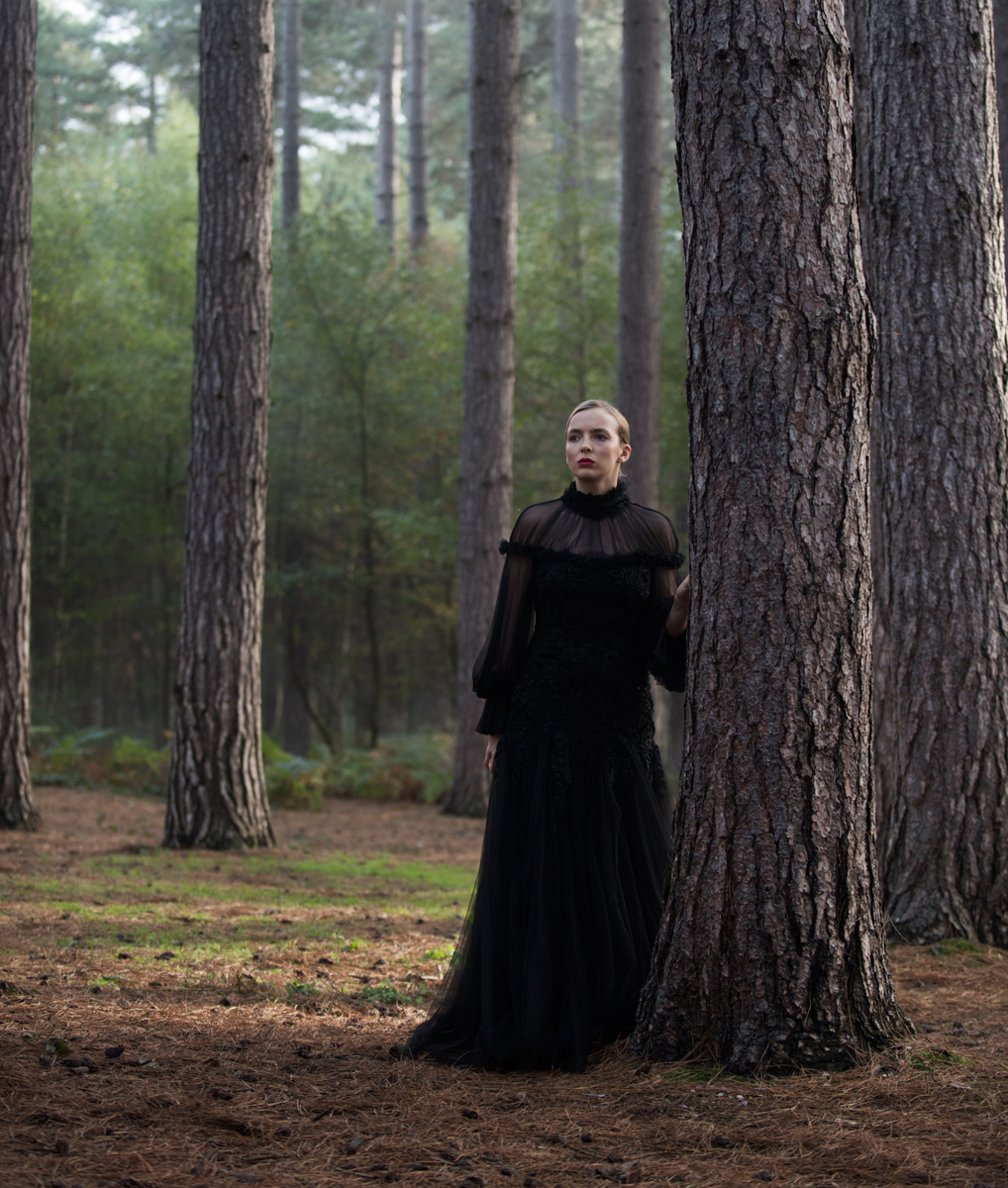 Charlotte Mitchell studied fashion at Central Saint Martins before earning her stripes as a designer and buyer for several years and coming to realise it wasn’t such a snug fit. With more of a penchant for styling, she sidestepped into costume design which, she found, was less restricting than pure fashion design, allowing her to design a character and style them to fit a certain genre or period of social history.

There’s more to it than that, though. “If I tell someone I’m a costume designer, generally the response is; ‘which costume did you make?’” says Charlotte. “Basically a costume designer is head of the costume department; I design the whole look of a production, manage a team of brilliant people who do the making for me and ensure my designs, which can include purchases, hires and makes, all come within the given costume budget.”

The whole look of a production feels like a daunting prospect – a little wave of anxiety courses through me just thinking about where to start. “Initially I receive the scripts and start creating mood boards, which I show to the director and producers, and then I’ll see what’s available. For period, I’ll check what can be hired or what vintage pieces I can find before deciding what I need to make and doing drawings. If it’s modern, I’ll start looking in the shops. I take these mood boards, ideas and clothes to the actor and we do a fitting and watch the character emerge. It’s not a quick process and it shouldn’t be. It’s great to see the ideas grow.”

It’s not a quick process and it shouldn’t be

Perhaps her most prestigious project to date has been the second series of Killing Eve, which switches up its writers and designers each season. “To have the freedom and large budget to design and style Villanelle was a dream,” says Charlotte. “A key word for her at mood board stage would be ‘attention seeking’ but she isn’t always this way, and sometimes as a designer you have to decide when your costumes are going to stand out and when they are not. It starts with the script.

“I was keen that she wouldn’t always be provocative in her fashion choices. There had to be quieter moments to allow other attention-seeking outfits to ‘pop’ more. In series two, when Villanelle is walking along the canal with Konstantin, Villanelle is wearing a vintage kimono, which I remodelled into a coat and red trousers – gorgeous, but not loud. Compare this to the pink blouse and skirt with extravagant vintage LaCroix earrings at the dutch café. Pop!”

Despite the glamour of Killing Eve, Charlotte’s favourite character, looking back, has actually been Hermia, in the BBC Agatha Christie adaptation The Pale Horse. “She’s such a sad, yet incredible character.

“Emotionally abused by her husband, she has this powerful silence. I used the period (1961) and her class to dress her in a silhouette that felt like an armour, based on early 1960s Balenciaga and Dior. She was always immaculately turned out, but I designed her clothes to have a restrictive feeling.

“I get so involved with the characters. My favourite is usually from the job I am currently working on,” explains Charlotte. “Liv Tyler was a joy to dress on Harlots, set in the 18th century. Liv plays a wealthy lady against the backdrop of prostitutes and brothels. We made everything from scratch and had all the fabric dyed to create the perfect colour. Liv is so game. She loves the dress up! And having fun with her character. I was able to go brilliantly flamboyant because she trusted me, and I feel really fortunate to be allowed that freedom by any actress.”

Having established that the best part of the job is working with incredible actors, we move onto the aspects of working in top-level costume design that disappoint, and the industry’s ingrained bad habits. “I absolutely hate fast fashion but sadly I have to shop in these high-street shops for my job due to late cast and late script changes, and I see the fast stock turnover. Every day the rails get filled up with new lines of cheap, badly made clothes. I can often be found running to a high-street shop and throwing many options into a bag because the actor’s on screen the next day and I don’t have access to them for measurements or time to think through the look.”

Liv Tyler was a joy to dress on Harlots, set in the 18th century. We made everything from scratch and had all the fabric dyed to create the perfect colour. Liv is so game.

Charlotte recently joined a crew-led organisation to fight the climate crisis from her industry standpoint, and along with other costume designers is discussing how they can try and shop more sustainably.

“Our instant-fashion culture has to change. My industry needs to slow down and plan better and the general public needs to consider the implications of fast fashion. A well-chosen item of clothing can last a long time and be styled in many different ways to adapt to trends. I have clothes from over 10 years ago that I wouldn’t be without.”

The lack of diversity in the film and television industry is also a source of chagrin. “Great black directors and actors are being overlooked when it comes to awards. Why was Queen and Slim not recognised? This was my favourite film from this year’s BAFTAs and I certainly voted for it. I know BAFTA have raised the question about lack of representation at nomination stage, so we wait to see their findings. There’s also massive lack of diversity in the filming crew. It’s important to make it clear that a career in film and television is available to everyone, promoting the success of BAME directors, designers and actors. We need more mentors to reach out and show these possibilities.”

With the whole industry experiencing a standstill this year – the pandemic stopping so much filming – Charlotte was put on hiatus and told, due to lack of insurance and not wanting to change the script to remove certain close moments between actors, that filming would only resume again in November. “Very strange times,” she says, “everyone waiting and watching to see who would be first to return to filming and how they’d do it.”

Our instant-fashion culture has to change. My industry needs to slow down and plan better and the general public needs to consider the implications of fast fashion.

Now the TV and film industries are up and running again, Charlotte is working on plenty of exciting projects again, and her most recent costume designs can be seen in season two of Harlots – the show is currently being broadcast on BBC 2. In between, she’s enjoying the South West and being among its brilliant residents. “Bristol is such a creative city with so many hugely talented people. Director Gavin Strange and Aardman have just won an award for their Greenpeace commercial Turtle Journey – their work is amazing.”

“Everyone needs to know about Miss Magpie Fashion Spy too – a brilliant illustrator. She is pushing forward diversity and disability in fashion illustration while selling her beautiful drawings.”

For Charlotte, meanwhile, it’s time to get back to the business of booking in new clients and push forward in finding fabulous costumery for her next intriguing character.

Next
Peaches Golding: “It’s nice to know Bristol had my back”
Start typing to see results or hit ESC to close
bristol gender film tv history
See all results