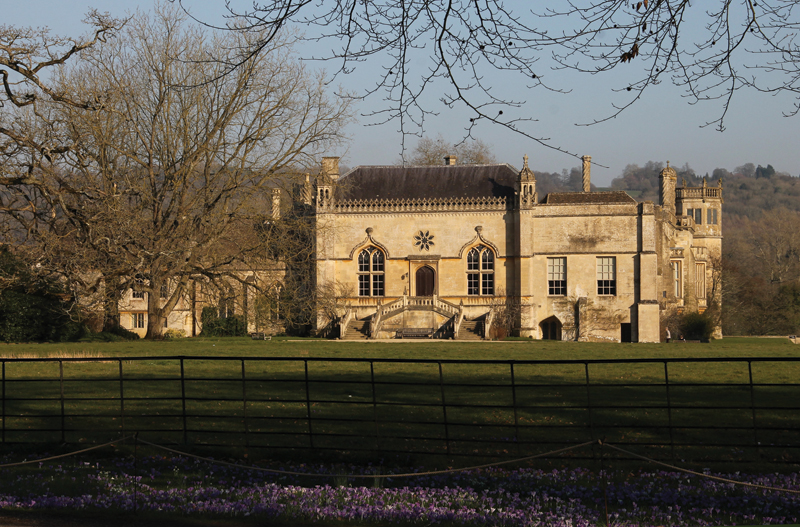 Many of those who traverse Lacock’s streets come to walk in the footsteps of characters dreamt up by Jane Austen or JK Rowling. Its real history, however, is even more fascinating, if distinctly less cosy, says Andrew Swift

It is not surprising that the village of Lacock is one of the West Country’s most popular tourist destinations. This miraculously preserved slice of old England has formed the backdrop to more costume dramas than almost anywhere else in the country – from Wolf Hall to Downton Abbey and from Pride and Prejudice to Harry Potter. That said, it hardly fits the received notion of a typical English village. It has no village green, no pond, no thatched cottages. It is better to think of it as a small town, with four streets of tightly packed houses, built of stone, brick and timber and displaying an astonishing range of building styles right through from the 13th to the early 18th century. Given its fame, many of those who traverse Lacock’s streets come to walk in the footsteps of characters dreamt up by Jane Austen or JK Rowling. Lacock’s real history, however, is even more fascinating, if distinctly less cosy.

Like many West Country towns, Lacock grew rich from weaving. It also stood on the old road from London to Bath, and in the early 18th century, as stagecoach traffic boomed, a large inn was built to cash in on the trade. Its prosperity did not last. By the mid-18th century, new and better roads had taken the coaches away. The West Country weaving trade, outstripped by competition from new textile mills in the north, entered a terminal decline. In other Wiltshire towns, new industries arrived to fill the gap, but in Lacock it was as though a spell had been cast. The lords of the manor, the Talbots, were paternalistic landlords who cared for their tenants, but were also determined to preserve the character of the village at all costs.

Not only did Lacock fail to expand, it resisted change. Almost all its buildings date from no later than the first half of the 18th century. There are, however, two notable exceptions – a school built by the Talbots on the High Street in 1824, and a workhouse tucked out of sight beyond the church. The workhouse is just about the biggest building in the village, and with good cause, for in the early 19th century poverty and unemployment stalked these venerable streets. Although the Talbots saw to it that railways came nowhere near the village, when the census was conducted in 1841, 136 men from Lacock workhouse were trudging daily across the fields to build Brunel’s line from Chippenham to Bath.

While the policy of preservation led to considerable hardship, it eventually paid dividends. By the late 19th century, increasing numbers of people, traumatised by the juggernaut of industrialisation, were seeking reconnection with a lost vision of Merrie England. Few places fitted the bill better than Lacock, but it was not just the village those early pilgrims came to see, for the home of the Talbots was, if anything, more remarkable still.

It started out, as did so many stately homes, as an abbey, founded in this case by Ela, Countess of Salisbury, for a community of Augustinian canonesses in 1232. For three centuries this small community of women enriched and beautified their abbey, managed the estates that Ela had bequeathed to them, obtained charters for fairs and markets, and established Lacock as a weaving centre. Then, in 1539, as the shadow of the Reformation fell across the land, Henry VIII grabbed the lot and slung them out.

The following year he sold the abbey, along with the village and the estate, to Sir William Sharington for £783. Sharington tore down the nuns’ church and incorporated the rest of the abbey into a new manor house. In 1546, he was appointed to run the newly established Mint in Bristol and, before his misdeeds were discovered three years later, managed to embezzle around £16,000. His property was confiscated and he narrowly escaped with his life, but money talks, and before long he had bought back his lands – including Lacock – for £12,867.

Sharington died childless and in 1646 the estate passed, by marriage, to the Talbots who held it for almost 300 years, before Matilda Talbot bequeathed it to the National Trust in 1944. They were a remarkable dynasty, cherishing their inheritance and doing all they could to enhance and enrich the abbey and village. Only one of them is remembered today, however – William Henry Fox Talbot, a brilliant scientist who achieved lasting fame as a pioneer of photography.

The abbey lies at the edge of the village, and is approached through parkland. When you come to what was clearly intended as its main entrance, though, you have to carry on, skirting three sides of the building to enter through a narrow doorway at the back. As you walk round, it is difficult to see any coherence in the long, low range of buildings. They appear to be of all ages and none, and, in a nod to the vernacular eclecticism of the village, some are even half-timbered.

Nothing, however, prepares you for what awaits as you step inside, for, instead of a country house, you find yourself in an abandoned cloister. The centuries fall away. The sense of loss suffered by that community of women almost five centuries ago hangs in the air like dust in a sunbeam. From this timeworn spot, stairs lead to the nuns’ refectory and dormitory – long converted to other uses – before you step blinking from a world of sunless medievalism into the cold light of Sharington’s ‘new build’. Sunlight streams through high windows in long rooms lined with ancestral portraits and, as you walk on, you pass an oriel window snapped by Fox Talbot one day in 1835 – possibly the oldest surviving camera negative ever produced. Then, as a grand finale, comes the strangest room of all – a baronial Gothic hall, built in the 1750s; mock medievalism run riot, with terracotta figures ranged around its walls. Naturally, a statue of Ela takes pride of place, although others are more disquieting – death for example, with a hideous grin, or a goat with a sugar lump balanced on its nose.

Despite the tourist coaches, the gift shops and the crowds, there are few places where the sense of times long past can be so keenly felt. Time your visit right and, while you won’t have the place to yourself, there should be enough space to let Lacock’s peculiar magic work its spell. Over a century ago, the travel writer Edward Hutton wrote that “Lacock is the most precious and wonderful village in Wiltshire”. His words remain no less true today.

Featured image: Let the centuries fall away at lovely Lacock Abbey – there are few places where the sense of times long past can be so keenly felt