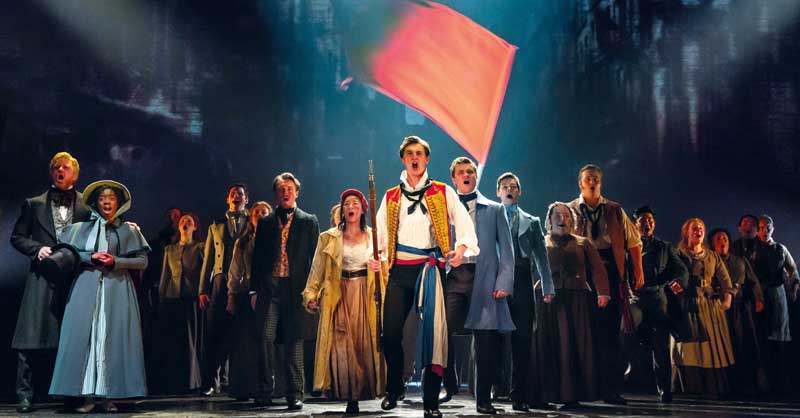 Les Misérables: The sound of revolution

After 36 years on the British stage, Les Misérables is one of the most successful musicals of all time. Ahead of the show’s arrival at the Bristol Hippodrome in July, Daisy Game chats to Musical Director Ben Ferguson about what makes the show such a crowd pleaser…

“Banger after banger”: according to Ben Ferguson’s (non-musical) friend, this is what the Les Misérables score consists of. It’s a fairly accurate description, if you ask me – or any of the 130 million people worldwide to have seen the smash-hit musical.

The musical director is telling me why it is he thinks the celebrated musical – based on the 1862 Victor Hugo novel of the same name and produced by King of The West End, Cameron Mackintosh – has whipped the general public into such a consistent frenzy: Les Misérables opened to London audiences in 1985, making it the longest running musical in West End history. In industry terms, that’s what they call A Very Big Hit Indeed.

“It’s an absolutely first class score,” Ben enthuses. “Claude-Michel Schönberg’s music is genius. It’s so catchy, but it’s also so stirring and so varied.” Ben’s word on the subject should be taken as gospel; having conducted the show over 600 times, he still leaves the orchestra pit humming. “It’s unbeatably brilliant music and there’s nothing like hearing it live, and seeing it live”, says Ben.

Despite its unchallenged box office reign, Les Mis wasn’t an instant hit with the critics, the majority of whom slated Mackintosh’s English-language version of its French equivalent (the novel was originally adapted for the Parisian stage by composer Schönberg and lyricist Alain Boublil). And yet despite some dismal reviews from the people who apparently know best, the public were of a different opinion. Les Misérables became the fastest selling Barbican show of all time, selling over 5,000 tickets the day after press night – and all before lunchtime.

It’s a fitting story for Les Mis: the public revolting against the (critical) authorities. Hugo’s novel follows ex-convict Jean Valjean – that’s prisoner 24601 to those in the know – as he navigates life beyond the bars and French Revolution conflict. With Hugo’s story seeing political and personal protests aplenty it seems only right that the critics of 1980s London were forced to swallow their words, and “hear the people sing”.

This year, Les Misérables is making the rounds: touring countrywide – including a three-week stint at the Bristol Hippodrome – until January 2023. Whilst this is technically the tail end of the 2018 tour (another of Covid’s cultural victims), Ben tells me that this year’s journey around the UK feels like a fresh start. Many members of the original touring cast and crew weren’t able to return to the production post-pandemic: around two thirds of the orchestra and one third of the cast have been replaced. “We sort of started again. We recast, rehearsed, reopened”, he says.

Les Misérables became the fastest selling Barbican show of all time, selling over 5,000 tickets the day after press night – and all before lunchtime

This extra push – sad as the reason behind it may be – has paid off. Post-Covid, audiences nationwide have been warm and giving. “We’ve had absolutely wonderful audiences everywhere we’ve gone”, says Ben. “We opened in Glasgow, and it was rammed – sold out every night with really appreciative, brilliant audiences. It was the same in Liverpool”, he recalls, reminding me that for some it will have been two years since they last experienced a live performance.

The great thing about tours like this one, Ben suggests, is that they bring shows out of the (often rather hard-to-burst) London bubble. “It’s been wonderful to take it to audiences who might not have had the chance to see the show before, or for whom getting to see a show in London isn’t practical because of distance and expense,” says the director.

Are there any songs that tend to give the audience – London-based or otherwise – a real kick, I wonder? It varies from city to city, says Ben – but Bring Him Home and One Day More are firm-fan-favourites. “It will be a long time before anybody writes a better end to Act One than One Day More,” Ben muses.

As musical director, Ben is a core member of the touring-team, accompanying the show on every step of its UK travels. Whilst the bulk of his job is to conduct each evening, Ben is also responsible for rehearsing understudies, giving notes to the orchestra and auditioning cast members; there’s a finger stuck in almost every musical pie, it seems.

Despite his jam-packed schedule, however, Ben still takes the time to admire the work of those around him. “I am astonished at the job that the people who move the show from city to city do”, Ben says, explaining that when Les Mis reaches the end of its run in a set location, everything on which the show is physically built (the set, the costumes, wigs, sound systems, lighting and so on) has to be deconstructed, and reassembled a few hundred miles down the road – all in the space of 48 hours. “The logistics of that always stagger me,” he says. “I leave the theatre on a Saturday evening, and when I show up at the next location on a Tuesday morning, it’s all been done.”

Not that Ben doesn’t have his own location-related juggling acts to perform. “Pits are all very different. Sometimes I’m up above the orchestra; sometimes I’m quite a lot lower. I have to adapt the pace of the show to the theatre because when you go from quite a small theatre to quite a big one, suddenly it can seem a bit too vast – because you’re filling a much bigger space with sound”, he explains.

It all sounds pretty head scrambling to me; and yes, it’s tiring work, Ben agrees – but life on the road is yet to lose its appeal: “It’s an awful lot of fun. You get to see bits of the country that you wouldn’t normally see. We tour to each city for quite a long time; a lot of shows will only come for a week. But shows like Les Mis, The Lion King, Beauty and the Beast, come for longer periods.”

Les Mis is also unusual (“let me count the ways”…) in that it has kept on a designated conductor role. “Some 30 years ago almost every musical had a conductor in the sense of a man or a woman with a stick to wave about in front of an orchestra. Nowadays, it is quite a lot more common for a show to be conducted by a piano player. Les Misérables is one of a relatively small number of shows which still has a musical director who stick conducts every night.”

Mackintosh’s musical might take a more traditional approach in conducting terms, but Les Mis is very much a modern musical. “It’s a show that easily adapts to being set in modern times,” Ben suggests, pointing out that “the parallels between the students in the ABC Café are very similar to the stories you see about people protesting against things like climate change and the government. There are these parallels in the story that relate to different generations.”

Indeed, Do You Hear the People Sing became the unofficial protest anthem of the 2019 Hong Kong riots – and has since been scrubbed from GQ Music, one of China’s popular streaming services. But whether it’s on internet record or not, Les Misérables bears the hallmarks of a story which will remain important to those seeking change for many years to come.

In Ben’s expert words: “It’s so timeless, the story. It examines a lot of the fundamental qualities of what it means to be human and what it means to live. It’s a story about redemption, and about fighting for what you believe in, and a story a love. Qualities that people nowadays relate to just as much as they would have related to them in the 1830s when Hugo wrote the novel.”

An astonishing 36 years on stage and counting, then.

Les Misérables will be at the Bristol Hippodrome from Tuesday 12 July – Saturday 6 August. Tickets available from atgtickets.com

All production images by Danny Kaan

Previous
Brunch out, the right way