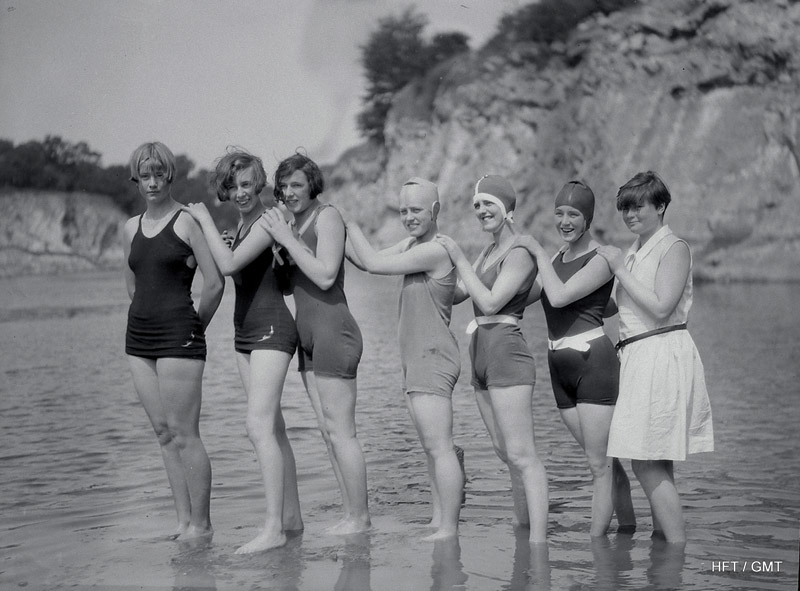 Life on the lake: 100 years of Henleaze

As Henleaze Lake celebrates its 100th birthday, local author Susie Parr has delved into the archives and written a book to preserve its rich past for generations to come

In 2012, a committee member of Henleaze Swimming Club asked me if I would be willing to write a book marking the club’s centenary, coming up in 2019. As a dedicated club member (swimming every day through the season, in all weathers) and author of The Story of Swimming – a social and cultural history of open-water swimming in Britain – he felt that I was well qualified to undertake such a task.

I prevaricated, knowing that to trawl back through the club’s history would be a massive and daunting undertaking. But after giving the matter some thought, I decided to go ahead; this would be an opportunity to honour an establishment that I have grown to love over my 30 years of membership.

There began a period of extensive research, mostly carried out during the winter months when swimming and gardening were off the agenda. Deciding to go back to original sources, I painstakingly read through 100 years’ worth of minutes. I struggled to decipher the copperplate hand-writing in the earliest record books, many of which were – fittingly – defaced by water damage. I read through boxes of correspondence and sorted through amassed photos and club memorabilia. I did extensive newspaper research, in the library and online. Together with a team of volunteers, I interviewed people who had been members back in the early days. Slowly, and with the help of the aforementioned committee member, I built up a picture of this unique institution, documenting how it started, its struggles and successes, and key turning points in its history.

Back to the beginning

Established in 1919 in a flooded limestone quarry, Henleaze Swimming Club was absolutely of its time. Sited in the middle of a newly developing, affluent suburb of Bristol, this open-air swimming club was considered progressive because it was open to women members from the start. The club was, in part, a response to the public appetite for relaxation and entertainment after the horrors and deprivations of the war years. Against a backdrop of industrial unrest and economic hardship, it encouraged sporting competition and put on events that attracted hundreds of spectators. It also promoted the practice of lifesaving and the teaching of swimming – essential given the lake is both deep and cold.

The resulting book, The Lake, looks at the social influences that shaped the club and charts its main developments decade by decade. In the final chapter, I describe the club in its 100th year, trying to paint a vivid, intimate picture of the people, activities and environment that make the lake such a special place. My rationale for writing the last chapter in this way is simple. I profoundly wish that someone had done the same a century ago. I hope that, in another 100 years, people will read The Lake and get a real sense of what club life was like back in the early 21st century.

It features iconic photographs from the club’s history and showcases some of the extraordinary artefacts in its archive including posters, the water damaged minute books and the membership cards. The final chapters are illustrated with photos by club members and by my husband Martin Parr – acclaimed photographer and confirmed non-swimmer.

Many fascinating stories emerged from the research. People storming out of an early committee meeting following a contretemps about biscuits; a bottle of brandy being kept in the superintendent’s hut as a restorative in case of emergency; England being thrashed by Sweden in a post-war water polo match; plaintive requests from naturist groups being repeatedly turned down by affronted committee members. There was bad language and high jinks in the gentlemen’s changing quarters; interlopers storming the club and dancing naked on the diving boards.

One of the most interesting stories came from Eddie Davies, who lived in Southmead in the 1950s. Between the ages of five and 14, together with a gang of other Southmead kids, Eddie would regularly break in at the north end of the lake to fish, swim and catch frogs (which he could swap for items such as catapults and inner tubes). Encamped in an area that could not be reached by club officials or the police, these children colonised the north end of the lake, naming different features and setting rules – for example, the girls had their own changing and swimming area where boys were not allowed. When Eddie came to a club Memory Day in 2017, it was the first time he had entered the lake grounds through the front gate.

A note to members in 1934 gave another insight into the club’s history, presumably referring to the British Union of Fascists, or ‘Blackshirts’ led by Oswald Mosley: The committee “considers it objectionable for members or their visitors to wear the uniform of any Political Party on Club premises.”

There is also plentiful evidence of members’ utter dedication to the club through the decades; when times were hard, it kept going largely thanks to their efforts. Building walls, laying lawns, clearing scrub, selling geraniums, mending deck chairs, re-tiling roofs, fixing frozen pipes, designing diving boards, establishing native plants and trees, improving water quality: the work of running the club was – and is – never-ending; much of it depends on members’ time, energy and skill.

Having gone through a number of difficult patches in previous decades, Henleaze Swimming Club is now thriving. Just a few miles from the city centre, it is a green oasis and a peaceful environment for swimmers, anglers and wildlife alike. I hope The Lake proves a fitting tribute to this beautiful, special place. Bristol is lucky to have it.

The Lake is available to buy from the Henleaze Swimming Club website; henleazeswimmingclub.org