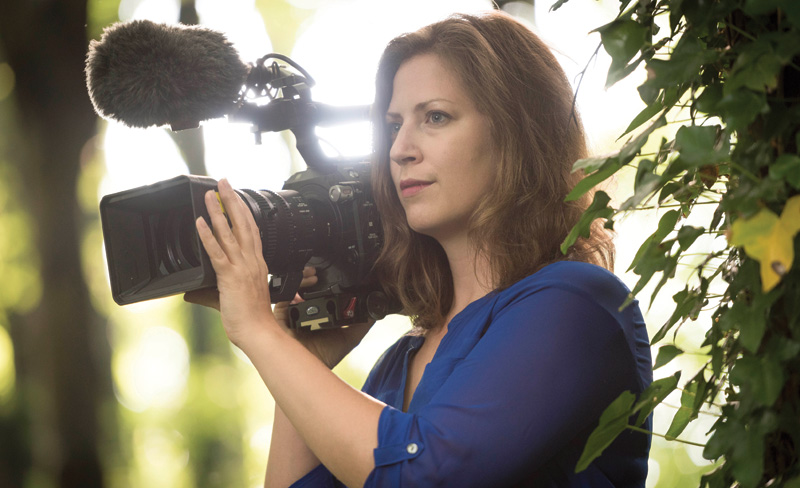 Filmmaker and journalist Lindsey Parietti aims to counter the one-sided narratives of chaos and conflict in relation to countries such as Liberia. We recently spoke to Lindsey about her latest three-part series following the lives of orphaned baby chimpanzees. Lindsey didn’t set out to study chimpanzees but the cheeky chaps reeled her in, didn’t they?

Doing her level best to highlight under-covered issues in challenging environments, Lindsey Parietti is a filmmaker and journalist who spent most of her career in Egypt and Africa covering politics before heading to Liberia to make her BAFTA-winning master’s film Blood Island, focusing on abandoned lab chimpanzees. She completed the MA in wildlife filmmaking at UWE in 2017, when she pitched and began work on three-part BBC2 series Baby Chimp Rescue for the BBC Natural History Unit, following the story of life in a home for orphaned baby chimpanzees, run by vet Jimmy Desmond and his wife Jenny. She tells us how the change in direction came about…

TBM: Who inspired you to start wildlife filmmaking?

LP: My family instilled a love of nature in us from a young age. I grew up surrounded by forest in upstate New York and we’d hike up the small mountain behind our house and build forts and play ‘pretend’, so I guess I always found being in the forest magical. My grandma and great uncle also exposed us to National Geographic magazines and wildlife films, which we used to wait eagerly for every week. But it never occurred to me to pursue anything nature-related as a career until much later. I was on a journalism fellowship in the Democratic Republic of Congo and saw the documentary Virunga. I was already moving away from covering politics as a journalist and towards environmental reporting, but that documentary is so powerful and convinced me of the impact film could have on environmental issues.

Tell us about that transition from politics to wildlife and environment – have there been any interesting points of crossover so far?

I was living in Egypt reporting on politics and breaking news during the 2011 uprising. After a few years, like many journalists there, I became disillusioned with the way the revolution, which had been so hopeful at the beginning, devolved. So many people were jailed and killed and the political situation only seemed to get worse. I felt like my reporting wasn’t having an impact and it was becoming harder to cover politics with the state cracking down on journalists. I wasn’t ready to leave and wasn’t sure what I wanted to do next so I began telling more feature and environmental stories and trying to find positive initiatives to report on amidst a pretty bleak situation. I used to watch BBC wildlife films as an escape and realised I wanted to tell stories about the natural world full- time. There’s a lot of crossover in the type of wildlife films I want to make – most environmental stories have politics behind them. At first I thought I just wanted to escape to a lush jungle in a beautiful place and be surrounded by nature for work – it sounded ideal. But when I came to Bristol for the UWE master’s programme in wildlife filmmaking it was still stories of social and environmental justice rather than pristine wilderness that I was drawn to.

What most surprised you about filming in the wild?

Probably the politics! But I haven’t filmed anywhere truly remote or wild yet so I may have to wait to answer that one. Both our BBC series Baby Chimp Rescue and my master’s film Blood Island were made in Liberia with people and animals in a fairly controlled environment. The former research chimps are on islands that we had to film from a boat, but we knew when they would emerge and their behaviour was probably more predictable in the filming sense than trekking for miles through a jungle to film wild animals. I’m still looking forward to a project that takes me to a more remote wilderness. I’d love to do something aquatic. The ocean is another magical world with so much more to explore and an urgent need for advocates and stronger protection.

Why have you focused on chimpanzees in particular?

I didn’t set out to focus on chimpanzees, but they’ve certainly pulled me in. For Blood Island I wanted to find an ongoing wildlife problem in urgent need of a solution that a film could help address. I also try to tell different stories from places like Liberia, where you often only hear a one-sided narrative of chaos, war and conflict, so when I found out about this decades-long medical research and the abandoned lab chimps, I knew I wanted to tell their story. Once I was in Liberia making my student film I met this amazing couple rescuing orphaned baby chimpanzees who became the focus of Baby Chimp Rescue. The interaction between the people, chimps, dogs, cats and chickens was like nothing I had ever seen before. The way Liberia Chimpanzee Rescue and Protection helps the chimps get over the trauma of losing their families to hunters and being sold into the pet trade is truly incredible. And seeing the chimps recover and develop their individual personalities is completely captivating. I hope the chimps and the inspirational people looking after them are a good gateway for people to care about wildlife and our impact on the natural world.

What are your thoughts on filmmaking as traditionally male-dominated?

Lots of industries have been traditionally male-dominated and I think that is changing. I’m fortunate to work at the BBC Natural History Unit every day with creative and talented people from a variety of perspectives, genders and backgrounds. But I do think the industry and filmmaking in general have a long way to go to be more inclusive. Storytelling will always be richer and more representative when it comes from an array of voices and programme makers.

What do you hope to inspire with your works?

Empathy, action and a sense of empowerment to make positive changes in the world around us. Wildlife films create that sense of wonder and awe and connect us with beautiful worlds. They can also connect us to the amazing people and animals who could use our support.

Is there anyone that you would like to collaborate with?

At the risk of sounding a bit like a fan girl, probably the director of Virunga, Orlando von Einsiedel. That film was a big part of what made me move to Bristol to get into wildlife filmmaking. He’s a powerful storyteller and I respect the film subjects he chooses and how he brings stories from difficult places to life.