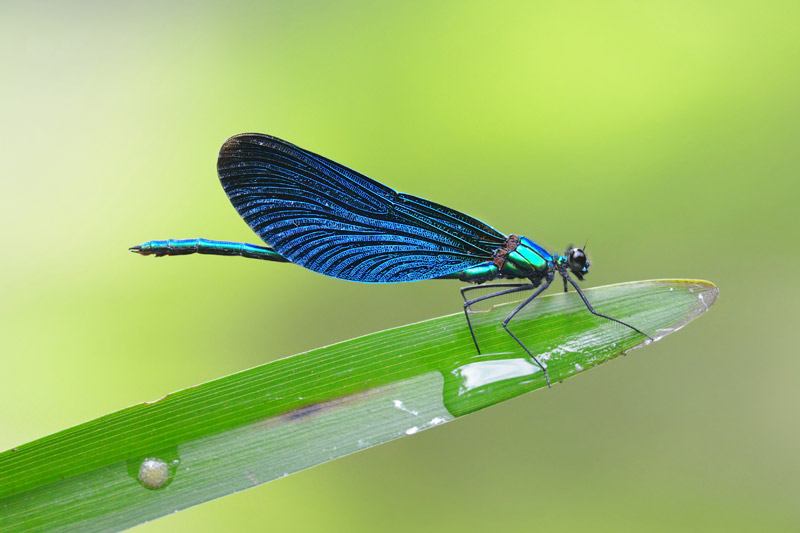 Sit on a river bank, or at the edge of a pond, on a sunny afternoon this month (if we get one!) and the air will be filled with flying jewels. Tiny shards of brilliant blue settle for a moment on the floating leaves of lilies while others, flashing ruby-red, skim low across the water. Above them, winged amulets in vivid green and burnished amber hurry back and forth.

Dragonflies and damselflies were among the first flying insects to appear on earth – go back 350 million years and you’d be greeted by a similar sight, except that, then, they were flying giants. A fossil of an incomplete wing from the Carboniferous period, found near Radstock in 1914, suggests that these early ancestors were four times the size of the largest examples that exist today.

Firstly, a FAQ: what’s the difference between the two? The answer is pleasingly straightforward: dragonflies are bigger, faster and hold their wings open when at rest; damselflies are slim, more fluttery in flight and settle with their wings in a closed position (there are exceptions, but this rule-of-thumb is pretty reliable). Both are brightly coloured (more so in males) and absolute masters of the air. They can travel in all directions (including backwards), moving their double set of wings at up to 55 beats-per-second and reaching top speeds of 30mph. All are formidable aerial predators, scooping midges, flies and even butterflies out of the sky.

Of the 57 different species of odonata (the group of insects that dragonflies and damselflies belong to) recorded in Britain, over 30 have been seen in the Bristol region. Of these, you might realistically expect to encounter a dozen or so if you go hunting for them.

Garden ponds are a good place to start. The enormous boom in their creation in recent years has provided valuable habitat in urban areas. They inevitably attract the most common and widespread species, such as the large red damselfly (often the first to colonise a newly dug pond), azure damselfly, broad-bodied chaser and southern hawker. This last dragonfly is an inquisitive insect, often hovering close to humans and giving them a good look-over.

Walk along one of the city’s rivers, especially the Frome, and you’ll be treated to beautiful or banded demoiselles or, if you’re really lucky, both. These large damselflies are absolute stunners with iridescent, aquamarine bodies and broad, smoky wings (the latter appears to have been pinched by a pair of inky thumbs). They look like they belong on the banks of the Amazon, but both are abundant on Bristol’s waterways.

Whereas damselflies never stray too far from water, dragonflies sometimes turn up in the most unexpected of places as they seek to colonise new areas. Brown hawkers – one of the easier ones to identify given its tobacco-stained wings – have even been spotted in Broadmead and along Gloucester Road.

Wherever, and whenever, you see them, stop for a moment and allow yourself to be dazzled by these airborne beauties. Because each and every one’s a gem.

The Field Studies Council’s Guide to the Dragonflies and Damselflies of Britain is a handy, fold-out ID chart designed for use outside; field-studies-council.org

Main image: A banded demoiselle damselfly with its iridescent, aquamarine body and broad, smoky wings – looking more like it belongs on the banks of the Amazon than Bristol’s waterways